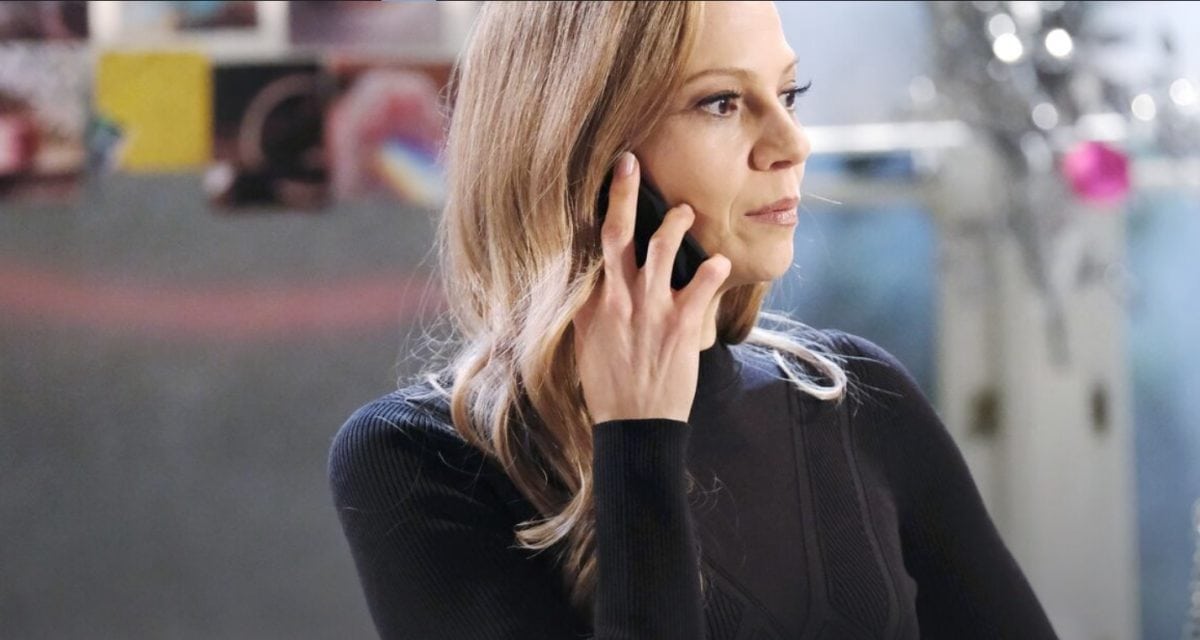 Wednesday, December 9, 2020: On Days of our Lives today, Ava makes demands on Kayla, Chad makes an accusation that crushes Abigail, and Nicole and Allie are glad to see Rafe return to Salem.

Gwen has a fit in the park, slamming her backpack on the bench and beating the poinsettias with the kids’ plastic baseball bat. Jennifer finds her in a state and asks what she’s doing, her concern for her grandkids apparent. Gwen was blowing off steam. Jennifer asks if they’re working too hard. Gwen denies that. The job is the only thing keeping her sane. When Jenn presses the matter, Gwen tells her Jack and Abigail patched things up. Jenn thinks that’s a good thing, but Gwen doesn’t think Abigail should forgive him for hurting her mother that way. It’s brought up the pain from what Jake did to her.  Jennifer understands what Gwen’s feeling. Maybe the baseball bat wasn’t such a bad idea! Gwen urges Jenn to try it. It upsets Jenn that Kate lives with them. Why didn’t Jack kick her out? Gwen wonders, too, why Kate even wanted to stay.  Gwen hands Jenn the bat, and Jenn smashes the innocent poinsettias, making Gwen smirk. After a time, Jennifer’s panting. She feels better. Gwen’s glad. She asks if Jenn will take Mr. Deveraux back. Jenn’s not sure. Gwen admits she still loves Jake but doesn’t trust him.

Abigail finds Chad in the DiMera living room and blurts, “Are you having an affair with Jake?” Abigail’s astounded. Chad brings up finding her passed out in Jake’s lap the night of the party. Abigail becomes sarcastic and then tears up, hurt at his accusation. Chad notices she hasn’t denied it, and besides, it wouldn’t be the first time she’s slept with one of his brothers. Taken aback, Abigail cries, and Chad immediately regrets his words. She turns the tables on him. Is he sleeping with Gwen? Chad calls that ridiculous. Jack stumbles in on their argument, which he heard upstairs. Abigail takes off and Chad explains what happened. He tears up. He doesn’t know what he was thinking. Jack blames himself, but Chad says this is on him. Jack knows they’ll work this out. Jack heads out and Abby returns. Chad apologizes. Jake looks like Stefan, and it reminds him of the past. Abigail will forgive him, but she’s hurt and angry right now. He gives her space. When he leaves the room, Gwen appears and asks what happened. Abs admits that Chad accused her of having an affair. Gwen smirks behind Abby’s back, but to her face, acts indignant on Abby’s behalf. Gwen hugs her, smiling widely.

Allie lets Rafe into Nicole’s apartment. They embrace. She’s thrilled he’s returned to Salem.  Rafe heard about what Tripp did to her. He’s sorry. He asks after Sami and Allie says it’s a long story, but she’s fine. “Are you?” Allie admits she’s not, especially since Tripp might get away with the rape. Rafe knows it seems unfair but doesn’t give her the right to take the law into her own hands. Allie cringes. Rafe’s glad she’s not hurt. Allie asks if he’s there to arrest her. “Not yet,” he says, hoping he can stop Tripp from pressing charges. Allie admits she got the gun from Grandma Kate’s room and that Ava, Tripp’s mother, took the gun from her. Rafe confirms it really was Ava, with a photo from his cell. He calls Allie strong and brave. They embrace.

Nicole takes Henry for a walk in the square and runs into Tripp. He turns to go, and Nicole snaps at him for not even wanting to see his son. Tripp denies that the kid is his. They argue about whether he raped Allie, and rehash Ava showing up and taking the gun. Nicole realizes Ava was probably in the warehouse in Nashville when she was. Tripp didn’t know that his mother and Nicole were friends and bonded over their equally horrid fathers. Even though Nic hates what Ava has done, she kind of understands her. She offers to let Ava see the kid if she wants.

Kayla returns home to Steve, who tells her he hasn’t kicked Tripp out yet. “Something has happened.” Kayla’s mouth drops open as Ava wanders out of the bedroom, wearing one of Steve’s shirts. Steve tried to call her last night, but she was in surgery. Kayla learns Rolf brought Ava back to life and realizes Joey could go free. Ava mocks Kayla and Steve has to hold her back from wrapping her arms around Ava’s neck. Kay wants to send her to jail, but Steve says they can’t. Ava taunts that she can still press charges at Joey for attempted murder. Ava wants Kay to make the kidnapping charges go away. Ava goes to shower while Steve tries to get Kayla to eat something. Kayla’s too stressed. Steve is sorry. He needs to watch over Ava for all their sakes. Kayla spits that her father’s dead because of Ava and her son is in prison. Tripp appears with coffee and learns Kayla heard that Ava’s alive. Ava appears and tells her son she left everything in Kayla’s hands.

Jack finds Jennifer at Julie’s Place, on her computer. He tries to make jokes, but Jenn’s not ready for that. Jack doesn’t know how to make things better, but he refuses to give up.

Nicole returns home to find Rafe leaving her apartment. They hug and he’s introduced to Henry. “Let me know when you want to go to your first Cubs game,” Rafe says. He takes off.

Rafe arrives at Stee and Kayla’s and upon seeing Ava, immediately arrests her for kidnapping Kayla. Ava asks if there’s anything Kayla wants to say. “Yeah, there is,” Kayla says…

Next on Days of our Lives, Steve and Kayla visit Joey in prison.