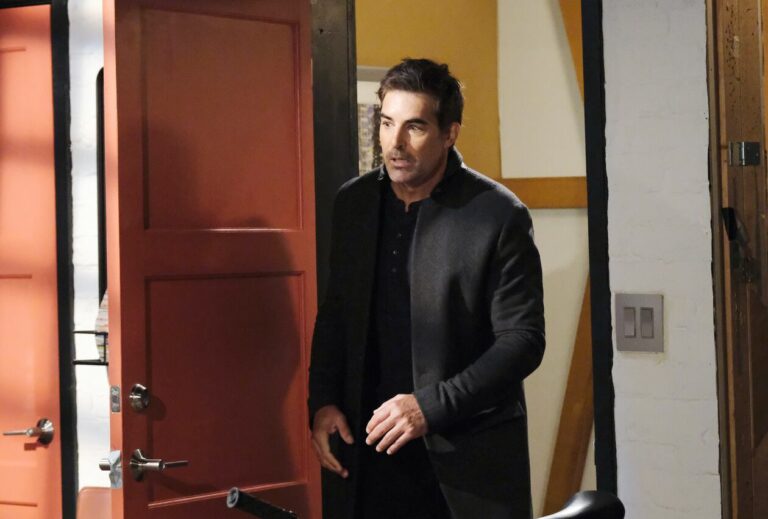 On today’s full episode recap of Days of our Lives, Nicole cries about her marital woes, Charlie and Claire head to her bedroom for sex, and Ben and Marlena work together to check on Claire.

Nicole tells Eric she’s disappointed but understands. They say I love yous and she disconnects when Rafe turns up at her door. He was shopping for David and found something for Henry. They talk about Allie’s rape and whether Tripp did it or not. It’s hard for Rafe to reconcile that the man he knows is a rapist. Talk turns to Ava being missing. Rafe hasn’t found her and they argue about whether Rafe cares if they do. Nicole’s mood shifts and she admits she’s missing Eric a lot and feels like she’ll never see or hold him again. She cries and complains that they have been apart their entire marriage. Soon, she’s calmed down and starts feeling bad about her complaints, knowing that she and Eric have something special.

At the park, Allie overhears Tripp asks his dad if he learned if Angelo admitted to raping Allie. She blows up and demands answers. He reluctantly tells her his dad thinks the rapist is a blood relative of his. His mother’s cousin. Allie thinks Steve’s trying to create a smokescreen. They argue about how it’s possible.

At Hope’s place, Claire tells Charlie that her parents are on their honeymoon and they have the place to themselves. Claire boldly asks for sex and Charlie says he’s attracted to her but doesn’t know how to act in relationships and always ruins them. Claire admits she’s the same and always felt second best. She talks about Ciara finding her soulmate in Ben. Charlie says maybe they’re each other’s soulmates.

In Philidelphia, John tells Steve that he thinks he knows who Charlie is, based on Angelo’s description of him. “I think he’s back home in Salem.” Steve scoffs. There are a lot of Charlies in Salem. John shares meeting Claire’s date Charlie, who wears glasses and is a klutz like Angelo said his nephew is. Charlie also has a brother he’s not in contact with and is from Philadelphia. Steve finally agrees it’s more than a coincidence. This could be the same guy.

Drugged up at Charlie’s place, Ava hallucinates that Tripp has come to save her. Ava tells Tripp the whole story that Charlie’s his brother and Allie’s rapist and before he gets her untied, Charlie appears and stabs his brother. Ava screams when she learns he’s dead. Steve turns up and knocks Charlie out with his gun and blames her for Tripp’s murder. “If you’d been a better mother, none of this would have happened. You’re a lunatic and you gave birth to a lunatic.” Steve will never forgive her. She hallucinates that Charlie wants to stab her.

Ben appears at Marlena’s office. He has nowhere else to turn. He tells Doc he still sees Ciara everywhere. The only time he’s happy is when he sleeps and dreams of her. He feels empty, like he’s going through the motions, otherwise. Marlena says that sometimes going through the motions is living. “Well, that’s the way we heal.” Most who struggle tend to go through the same feelings. She suggests a grief support group but he’s not sure he can discuss this with strangers. “What about with Claire?” Marlena asks. She’s grieving for Ciara as well.

From Hope’s place, Claire sees that John’s calling her. She decides to call him back and turns off her phone. Claire asks if it bothers him that she spent time in a mental hospital. He says it doesn’t. She admits her insecurities about being too clingy but he claims he’d love if she was clingy. “We all have dark impulses. Even me.” Claire asks him to elucidate and he flashes to telling his mother that he plans on committing her. He’d rather not say, but Claire thinks honesty is important. “You can tell me anything.” She vows never to judge him. Charlie admits he’s less stressed out now but refuses to tell Claire what was stressing him out. He thinks they’ve done enough talking and asks, “Are you ready to go to your room?” They go up to her room.

In her office, Marlena excuses herself to take a call from John who lets her know his theory that Charlie’s Allie’s rapist. They have to prove it still. But he’s worried for Claire since she’s not taking his calls. Marlena promises to check in on her. She disconnects and tells Ben that they may have a situation. She calls Claire, who doesn’t pick up. Marlena leaves a message to call and then asks Ben if he has met Charlie Dale. He has met him once but they were supposed to have lunch and Charlie declined. “I think he wanted her to himself.” Marlena worries and Ben presses. “Is everything okay?” Marlena asks Ben to accompany her somewhere…

From Philadelphia, John calls Rafe to tell him his theory on Charlie and asks him to go by his place and pick the kid up. John gives his address and Rafe takes off from Nicole’s and heads to Charlie’s.

Rafe arrives at Ava’s place and hears a noise. He breaks in, gun in hand, and finds Ava on the floor, still tied up and gagged.

A spoiler for the next full episode of Days of our Lives has Rafe making a stunning discovery.