Home » Days of our Lives » Kristen Pulls a Gun on Chloe, While Victor Learns Brady’s Been Shot

Kristen Pulls a Gun on Chloe, While Victor Learns Brady’s Been Shot 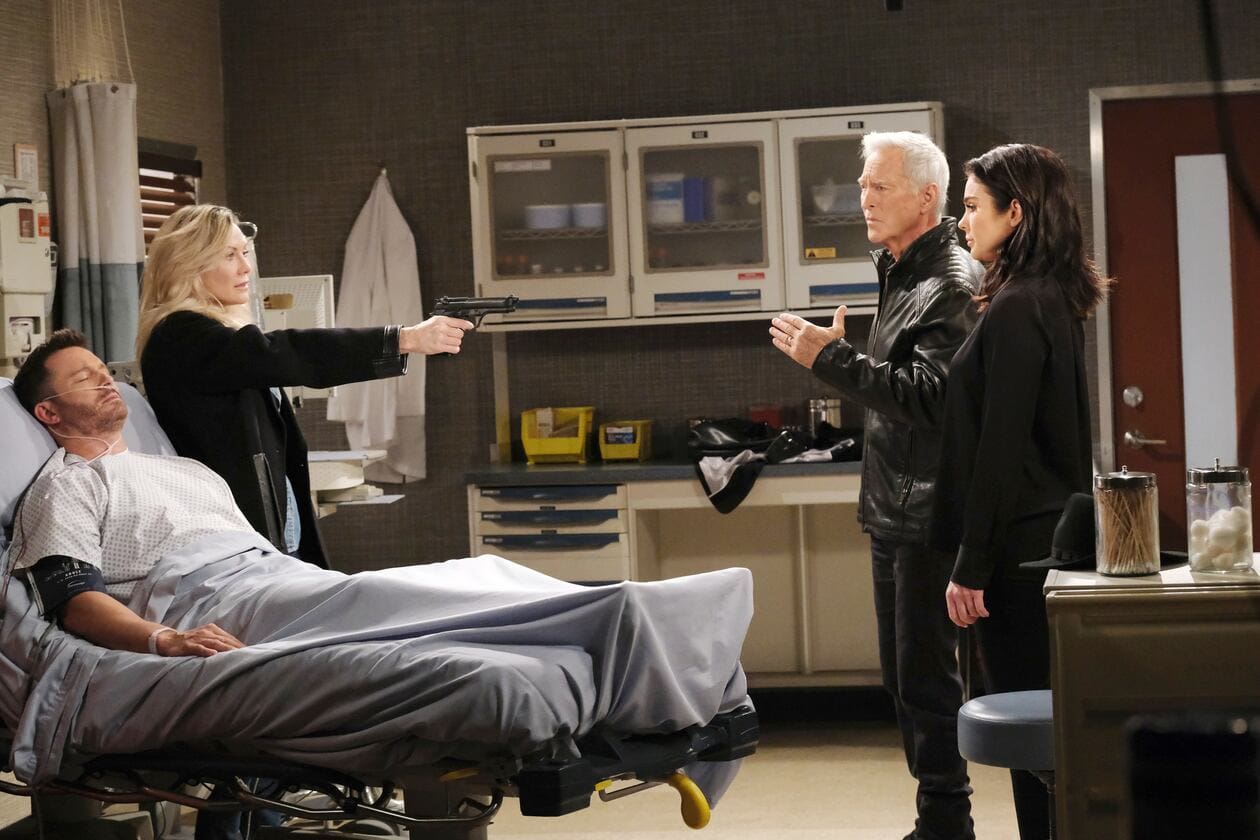 On today’s full episode recap of Days of our Lives, Philip apologizes to Victor, Anna gives Abigail advice, and Kristen goes off the rails.

At the mansion, Xander tells Victor that his son’s in trouble. He fills his uncle in on the mafia laundering story and Philip appears. Victor snaps, “Betrayed by my own son. Can it get any worse than this?” Philip says yes it can. “Brady got shot.” Philip tries to let his dad know that Brady’s being taken care of and Xander explodes and blames Philip. PhillyK shifts the blame to Xandy and Xander goes off on Philip for being a “two-faced loser.” Victor asks Xander to stop, but the guys continue to argue. Victor tells Xander to call his girlfriend and get an update on Brady while he talks to his son. Xander goes and Victor tells his son he screwed up. Philip apologizes. Victor says he could have told the truth. Philip couldn’t bear to disappoint him again. He asks for forgiveness. Vic says it depends on whether Brady survives. Xander returns with an update.

At the hospital, Philip calls John to tell him that Brady’s been shot. John and Marlena rush out of the pub. Meanwhile, in Brady’s room, he’s unconscious as Chloe sobs at his bedside. She blames herself as Kristen walks in. “Kristen, what are you doing here?” Chloe asks. Kristen snuggles with Brady and cries. Chloe realizes Kristen broke out of prison and tells her Brady may still need surgery, though the bullet was removed. Kristen screams at her to explain what happened. She pulls out her gun, assuming this is Chloe’s fault. Chloe looks horrified.

At Alice’s, Anna and Abigail talk about Gwen’s article in the Intruder. Anna doesn’t understand what Gwen’s reason is so Abigail shares the big reveal with her, that her father had a one-nighter with her mother. “Wait, you’re saying Gwen is your sister?” Abs tells Anna the whole story. Gwen feels abandoned, which is why she’s out to destroy their family. Anna’s sorry and stunned to learn Gwen is the one who drugged her and that Dr. Rolf gave her the drug. Abigail says Chad didn’t trust her, which is why he slept with Gwen. Abby doesn’t know how they’ll get past this. Anna knows they can and they will. She reveals that she and Tony have had a lot of ups and downs and forgiveness. “This is just another storm to weather.” Anna thinks she’ll do it for her and Chad, and their kids.

At the mansion, Chad talks to Stefano’s portrait, telling him he’ll fight for his wife. Tony calls to tell him to get to the hospital. They have a family crisis.

Chad turns up at University Hospital and Tony fills him in on Kristen’s break out. John and Marlena arrive. Tony notifies them that Kristen’s there and tells them what happened at the prison. Back inside Brady’s room, Kristen demands answers. Chloe complies and explains that it was a mob hit. John walks in and jumps back when he sees Kristen brandishing a gun. John tries to talk her down. John says Brady can sense what’s happening. This isn’t good for him. Kristen lowers the gun and cries. She asks John to tell Brady she loves him once he wakes up. John promises, to do so if she’ll leave. Kristen kisses Brady and goes, leaving Chloe in tears. John holds her as she cries. Outside, Marlena and Tony discuss Kristen’s desperation to see Brady. Marlena worries about John. Kristen appears and Chad asks for the gun. Kristen cries. Marlena wants Kristen to think about how far she’s come. She has a beautiful girl, she’s made amends to the people she hurt and is paying her debt to society. They’re all proud of her. Chad takes the gun and Kristen sobs in Marlena’s arms. Marlena vows to keep her posted on everything that happens with Brady, while Chad and Tony support Kris and tell her she needs to go back to prison. “Alright. Sorry for taking you hostage,” she says. Chad and Tony laugh. Chad calls the cops to let them know his sister is ready to turn herself in. Back in Brady’s room, John cries as he begs Brady to stick around for him. “I can’t lose you, buddy.” Marlena appears and they embrace. Later, a cop arrives and takes Kristen away as Kristen vows to Chloe that this isn’t over.

Chad arrives at Abigail’s after getting her voicemail.

Tony arrives home and Anna shares the news about Gwen being Jack’s daughter and how everything she did was out of revenge. “Oh and get this. Gwen is the one who drugged Abigail.” She apologizes for rattling on and asks how his visit with Kristen was. Tony takes the drink from Anna’s hand and downs it. “That good, huh?” Tony nods.

The next time on Days of our Lives, Ben makes an admission.