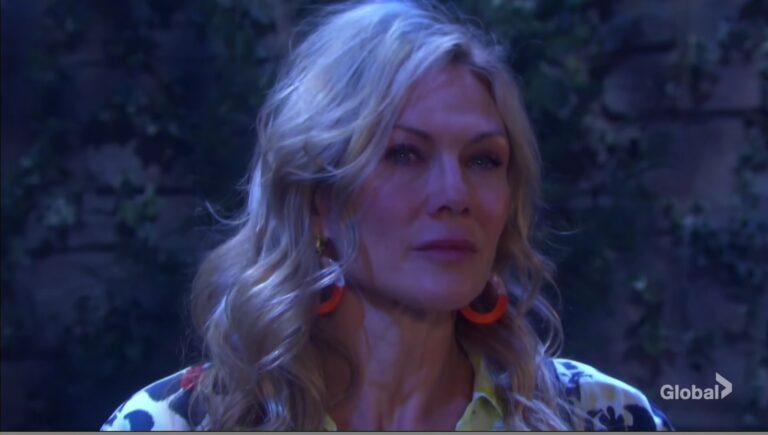 In the Thursday, May 27, 2020, full episode recap of Days of our Lives, Susan gets out of prison, Gabi tells Ava all about her and Jake being in love, and Kate gets a shock.

Marlena finds Susan at Statesville and tells her that Kristen’s going back to jail. Susan isn’t going to be held responsible because Marlena helped the authorities to understand Susan’s “trusting and childlike nature.” Marlena has Susan’s clothes.

At home, John calls Steve looking for Brady. He disconnects when his son shows up. Brady says he was with Kristen. Later, Marlena brings Susan home. Susan fawns all over Brady, having heard that he was in an accident. They both got caught up in believing Kristen’s lies. Susan asks him to forgive her for letting herself be manipulated. He tells her there’s nothing to forgive and shares that he dumped Kristen. Susan offers to make it up to him like babysitting. Marlena thinks Roger must be missing her. Susan goes off to “wash that Kristen DiMera right outta my hair.” Later, Marlena comes from Susan’s room and tells the men she’s gone and didn’t color her hair yet. Nobody saw her leave.

Chad goes to Kristen at SPD and yells at her for putting Kate in a coma. Kristen cries and says she did it all for Brady. “This is your idea of love, Kristen?” She tells him Brady wants nothing to do with her. Chad asks what she expects. She put one woman in the hospital and vanished another. Kristen knows but she needs her brother’s help in getting out of there. She reminds him they’re family. They’re DiMeras and she needs his help. He thinks about it and he tells her he loves her but he didn’t condone the things their father did, or what she did to Kate. Maybe she should reconnect as a nun. Kristen says maybe she will. She sobs as she tells him she misses Rachel and will have to find the good inside her again. Chad holds her hands and tells her he knows it’s there. He’ll be there for Rachel. She asks for a pen and paper to write an important note. Susan arrives later and is sorry she agreed to Kristen’s plan. She never would have if she’d known people would get hurt. Kristen didn’t mean to hurt anyone. Kristen says her life might as well be over without Brady. Susan feels bad. There’s plenty of her to live for. Kristen apologizes for what she put Susan through. Susan forgives her. Kristen’s grateful and asks what she’ll do now. Susan will go home to Roger but she’ll check on Brady and Rachel for her. Kristen gets up and asks for a hug and when they embrace, Kristen gives her some sort of Vulcan grip and Susan passes out. “Sorry about that,” she says. She’s not going back to prison.

Jake sits at Kate’s hospital bedside. She’s still comatose and he tells her how she’s the strongest person he knows. She’ll be out of this bed and kicking ass in no time. Kayla walks in with Kate’s scans. The bleeding has abated and they’re ready to take her out of the coma but Kate could be blind or have brain damage when she wakes up. Jake admits they’re broken up but he’d still like to stay. Kayla has reduced the medication and thinks it’d be a good idea that Kate’s not alone when she wakes up. She goes and Jake apologizes for letting Kate down.

Gabi walks into Rafe’s house looking for Rafe. She sighs that Ava hasn’t moved out yet. Ava tells her that Rafe’s at work and she’s bringing him lasagne. Gabi calls her brother a sucker for damsels in distress and thinks Ava should “pack up that damned lasagne and move out.” Ava rubs it in Gabi’s face that she and Rafe are dating. Gabi pauses and purses her lips. “It’s only a matter of time he gets tired of your cannoli and moves on.” She asks her to pass on news about Kate and lets Ava know that she and Jake are an item now. Ava’s surprised when Gabi volunteers that Kate walked in on her and Jake in bed, but Ava says sex doesn’t make a relationship. Gabi threatens that she’d better not hurt Rafe before she stomps out.

Related: James Read’s back to Days

Rafe lets himself into Xander’s room and asks why Nicole’s there. Nic says they’re discussing a job proposal. Rafe finds that ridiculous. Nicole would never hire him. Nicole admits she’s considering it. Brady is recovering and Chloe’s missing and she needs the help. Rafe knows there’s more going on. When she refuses to say, Rafe asks if she knew he tried to kill Sami and Lucas. Xander makes light of it, saying Sami overreacted. Xander suggests Nicole talk to Brady about hiring him and once she’s gone, Rafe pulls out the gun Xander used on Sami. Xander shrugs and denies attempting to murder them. He invites Rafe to check his bank account.

Gabi goes to Kate’s room at the hospital and finds Jake there. He updates her about Kate’s prognosis. They discuss how Kate doesn’t know that Jake loves her, that he never stopped. What if she wakes up ready to pick up where they left off. Will Jake tell her about them? Of course, he will, he says, but not as soon as she wakes up. Soon. He professes his love for Gabi and then Kate wakes up. She looks around. Jake, is that you? Jake, Jake, I can’t see you.” She looks frightened. Gabi says she’ll go find Kayla. She leaves and Kate wonders why Gabi’s there. Why can’t she see and why is she in the hospital? Jake explains everything. Jake lets Kate know that the blindness will be temporary. She can’t recall Kristen attacking her. The last memory she has is of seeing Susan while packing for their trip.

Chad arrives at the townhouse with a note from Kristen for Rachel. Brady sighs. Chad’s sorry for what his sister has done. He tells them Kristen wanted her to help him escape. They should know this. He leaves to check on Kate.

Ava arrives at SPD and finds Kristen in the midst of changing into Susan. Ava refuses to keep quiet about this but Kristen reminds her that she’s the reason that she’s alive again. Later, Kristen’s gone when Ava tries to revive Susan. Rafe wanders in, shocked to see “Kristen” on the floor. When she comes to, he’s shocked to see it’s Susan. Ava lies that she found her like this.

In the park, Kristen vows she’ll be with Rachel and Kristen once again. He’ll forgive her. He always does. “You haven’t seen the last of me, Salem,” she says.

Nicole visits Brady at home and learns that he dumped Kristen. She’s sorry. He says his head and his heart are at war. Nicole asks to talk business. He thanks her for everything she’s done at work while he’s been gone. When she asks him to hire Xander, Brady laughs and tells her she’s out of her damned mind.

Chad drops by the hospital and Gabi tells Chad she’s not sure Kate’s okay. In her room, Kate reveals she was looking forward to being alone with Jake.