Home » Days of our Lives » Days Recaps » Julie Points a Finger at Xander and Gwen for Murdering Dr. Snyder, While Abe Gets Egged as Mayor

Julie Points a Finger at Xander and Gwen for Murdering Dr. Snyder, While Abe Gets Egged as Mayor 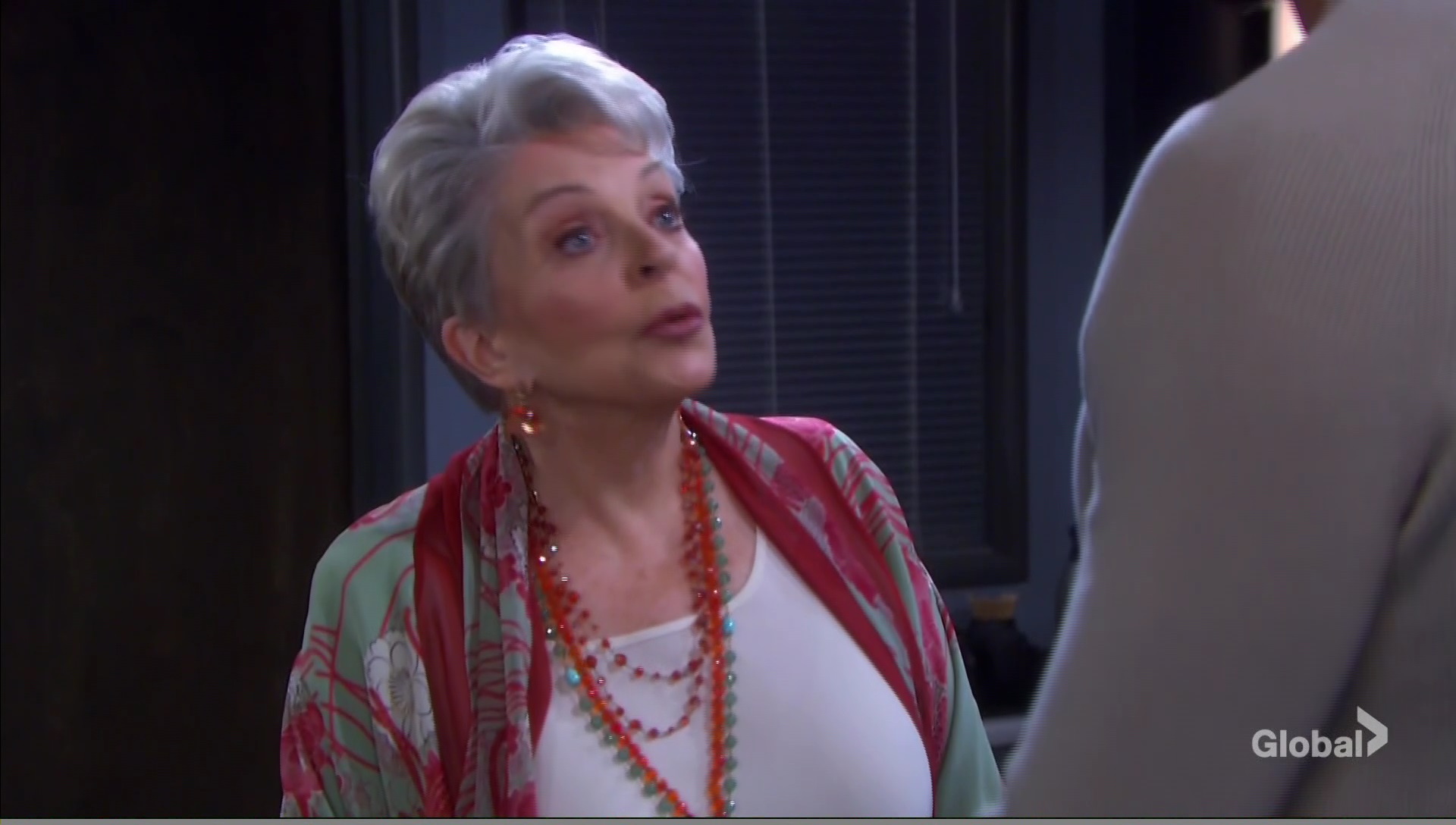 In the Tuesday, July 13, 2021, full episode recap of Days of our Lives, Julie goes to Eli about a  murder case, Allie chooses Tripp, and Abe gets egged. In case you missed out, on Monday’s Days of our Lives episode,  Justin refused to represent anyone in the Ben and Ciara divorce.

John and Marlena get the wine ready for Abe’s visit. When Abe arrives, he’s disheveled and has egg dripping down his suit jacket. John questions him. He was egged. The mayor was egged. Marlena soaks his suit in cold water and Abe admits he’s been confronted by the constituents who think he colluded with her or he’s an idiot for not realizing what this project is. “I am now the mayor of Egg Town.” He blames himself. John and Marlena try to lift his spirits and tell him this isn’t his fault. Can they stop it? Marlena wonders. Abe says no. She has every right to demolish the place. Abe says Paulina confided that she was trapped in a relationship with a wealthy, powerful and abusive man. They feel for her but that has little if nothing to do with this. They learn Paulina wants to work it out with him but Honest Abe says they’re done. Once he’s gone, John and Marlena kiss.

Lani and Eli talk on the phone when Paulina arrives. Lani opens the door and then promptly closes it in her face. Paulina pounds on the door. She can’t just slam the door in her face. “Your mama raised you better than that.” Lani opens the door and she asks to see Chanel, since Lani won’t talk to her. Paulina worries. Chanel didn’t spend the night at her house. She worries about what trouble she’s stirring up now. Paulina texts her but gets no response. Lani rakes Paulina over the coals for selling her own family out. Paulina didn’t know that the square was a tribute to Eli’s family or that Chanel wanted to open a bakery. And then it was too late to turn back. Lani says now, he has egg on his face. Paulina didn’t count on falling for Abe or him being such a good man. It was business. She hopes they can forgive her one day. She’ll have to prove herself again. It won’t be easy. “Try impossible,” Lani snipes. She sang her aunt’s praises. Paulina’s proud and loves Lani. Lani feels played and thinks the check for the twins’ education was a bribe. Paulina argues that it was their christening gift. Lani doesn’t want her daughter to be anything like Paulina. She asks her aunt to leave.

At Nicole’s, Allie wants to talk to Chanel about their kiss. Chanel sees her mama’s text come in and ignores it. “I don’t think so.” Chanel calls kissing Allie, “Nothing.” Allie says she realizes she wanted the kiss to happen again. So did Chanel. She didn’t plan it but it felt right. She may feel something for Allie that’s more than friendship. Allie thinks she might feel the same way but she’s technically seeing someone else. Chanel thinks she can… “Dump him?” Allie asks. Chanel calls it a step back to see where things go with them. Tripp arrives and Chanel goes. They discuss the deal that happened at the square. Allie says Chanel’s devastated and stayed over. Tripp calls Allie a good friend. Did they do anything fun to celebrate the Fourth? “Sort of,” she says. Tripp likes Chanel. Later, Allie has revealed that they kissed again. “It was mutual this time,” Allie admits. “Oh. Okay,” he says and asks what all of this means. Is she breaking up with him? “No.” She’s made her choice – him. They kiss and he asks if she’s sure. She is. Chanel walks in and they don’t see her as they go to the bedroom for sex.

At The Bistro, Bonnie asks Justin to marry him. He says no. She’s confused. Is he saying no to her proposal or not? “I’m sorry Bonnie, I’m not,” he tells her. Bonnie calls this awkward. She misread the situation and calls herself a fool. Someone like him would never want to marry someone like her. She starts to cry that she’s not sophisticated, or proper, “Or Adrienne.” She jumps up and races off and Justin sighs.

Julie arrives at SPD to report a crime. She wants to talk about Snyder. She knows what happened. “He was murdered and I know who killed him.” She fingers Xander and Gwen. She saw it. Eli’s confused. He asks her to start from the beginning so she tells him that she found Snyder drunk on her sofa. Now she realizes he was actually dead. “I see,” Eli says. He looks at the file and tells her that he died of natural causes. He had a heart attack and fell off the boat, is Eli’s working theory of how he died. Julie implores him to talk to Xander and Gwen once more, so he obliges.

At home, Bonnie starts to pack when Justin arrives. She asks if he’s seen her fuzzy dice. She looks for her Dolly Parton nightlight. Justin gets down on his knees. She wonders what the hell he’s doing. He wanted to propose to her and had it all planned. She thinks she ruined it. He gives her a ring and proposes. She says yes, sobbing and they smooch and then talk about how she has insecurities and that he loves her. “I don’t propose to just anyone, you know.” She thanks him and says she’s never felt this loved. They have sex. He wants Sonny as his best man and is shocked to hear she already asked Kayla to be her matron of honor.

Paulina sees Chanel in the square. She’s been worried sick. Chanel was at Allie’s explaining why there wasn’t going to be a bakery. Paulina has a solution. She wants to give her another opportunity to start her bakery in another place. Chanel yells that she’s not interested and goes. Abe appears. Paulina feels awful. She was trying to make it up to her. She’ll do anything. He tells her to stop the demolition. “Save the square.” Paulina cringes.

At Julie’s, Eli and Julie talk about how her grandparents are turning over in their graves that there was a dead body on their sofa.

Eli arrives home after Lani finishes a call with her mama. Lani tells Eli she told Paulina she doesn’t want her in her life. Her mama told her to forgive Paulina but she isn’t sure how she can.