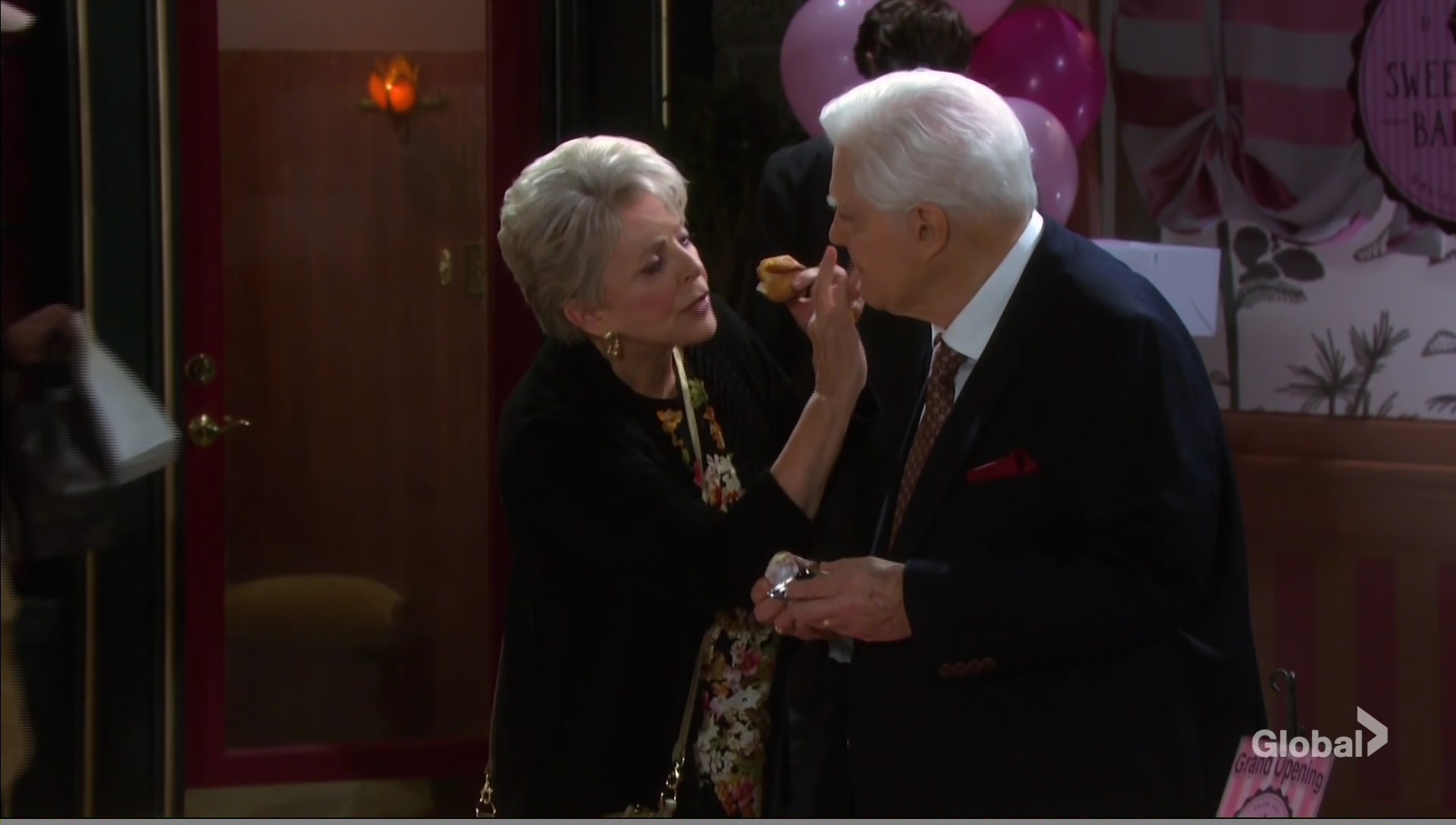 In the Friday, September 10, 2021, full episode recap of Days of our Lives, Allie apologizes to Chanel, Gwen and Xandy try to come up with lies to tell Jack, and Doug and Julie insist he doesn’t have Dementia. If you missed out, Soaps Spoilers has you covered with Thursday’s Days recap: Jake duped Philip.

It’s the grand opening of Sweet Bits. Tripp tells Ally that today will be great. He tries a piece of Alice’s donut and tells her, “You guys are gonna kill it.” They haven’t spoken since she raced out of her apartment after hearing her brother and Chanel almost had sex. They agree to talk about it later. They kiss as Chanel strolls up. They talk about the oatmeal cookies going fast and Chanel comments that they’re Tripp’s favorite. She thinks it’s time to discuss her issue with her sleeping with Johnny. Allie loves her twin but he has a bad track record with women. Allie’s surprised to hear that Johnny’s been texting Chanel, but she hasn’t responded. Allie looks as though she feels bad, causing Chanel to ask, “Isn’t that what you wanted?” Allie doesn’t want Johnny to break her heart the way he did her friend Katie. Allie cares about her so much and asks for forgiveness. She thought she was doing the right thing. She admits she also did it because she was jealous.

EJ reads the news about Bonnie’s arrest at the DiMera mansion. “Never a dull moment,” he says. He calls Xander and leaves a message demanding his money or he’ll do exactly what he warned he’d do. He places a few more threats as Johnny comes upon him. EJ disconnects and when Johnny asks who he was threatening, EJ lies that he was making work calls. Johnny thinks that’s more of a reason not to work for him. EJ explains what happened briefly and Johnny asks if he can use the money to invest in his film? EJ has no interest and says, “You want to make silly little movies on your phone.” EJ tells him to find another chump and Johnny takes off angry while Chad meanders in.

Xander jumps out of the shower and listens to EJ’s message. Gwen drops by. She heard about Bonnie and realizes he was right that she stole his money. Xander tells her what happened at the Kiriakis mansion and calls EJ to let him know that the cops have the money. He’ll deliver his money as soon as it’s back in his possession. EJ snaps at him and disconnects. Gwen feels bad for getting Xandy into this mess. She admits she didn’t come clean with her father. As they talk, she reveals that Doug locked “the old ninny” in the freezer. Xander bursts into laughter. Maybe he’ll try to drown her in a vat of Scottish wine, or stranger her to death with her beloved throw on her beloved couch. Gwen laughs and their good mood turns to passion. They make out and fall to the bed. After sex, she hopes he doesn’t think she came there just for that. Talk turns to her hoping Jack doesn’t find out about her lies. Xander caresses her arm as he tells her that Jack won’t forgive her if he finds out what she did. Gwen agrees. They don’t have the same history as he does with Abigail. Xander says she needs a convincing story about the blackmail. Gwen normally can come up with lies in her sleep but she’s stumped this time. Xandy says it has to be something he wouldn’t want to investigate. They’re two highly skilled liars. They should be able to put their heads together and think of something. They chuckle. She should tell Jack she was a hooker and Snyder was one of her clients. She asks how she’s expected to say that and not throw up afterward. He recognized her and threatened to expose her past if he didn’t agree to be his drug mule. Gwen can’t do it. She thinks she should tell the truth. She jumps into her jeans and decides there’s no time like the present. Xander thinks if she does tell the truth, there’s no reason for them not to see one another. They grin at each other and kiss goodbye.

At Alice’s, Jack calls Kayla to confirm an appointment for Doug today. Julie appears and Jack tells her that Kayla will see Doug today about his memory lapse. Julie says to cancel. “We don’t need to see anybody.” Jack reminds her that Doug locked her in the freezer and mixed up a few names. Jack saw how afraid she was. Julie denies any issue again. He doesn’t have Dementia! Doug appears and agrees. He doesn’t have Dementia. He apologizes for locking her in the freezer. Jack’s surprised he remembers. Doug remembers everything. He had so little sleep the night before but last night he slept like a baby. They head out to Sweet Bits grand opening to support Allie.

Back at the manse, Chad and EJ argue about Chad telling Johnny to follow his passion. Chad stands by what he did and urges Chad to let Johnny follow his own path instead of putting him on “a leash.” Talk turns to Abigail. EJ wonders why she hasn’t returned and Chad hasn’t taken the kids to see her. Chad says she doesn’t want him to but Jack offered to talk to her. EJ thinks that’s lame and tells Chad, “Go get her.” Chad doesn’t see his wife anywhere. EJ doesn’t want to see “that duplicitous whore again.” Chad finds that very hard to believe. He probably knows where Sami is. EJ denies it.

Johnny sees Tripp at the hospital. He’s there to talk to his grandma about investing in his film. Tripp wishes him luck and asks how things went between him and Allie last they spoke. Johnny is upset at how things went down and says Allie wants Chanel for herself. Tripp denies that but Johnny knows his sister. She’s still hung up on Chanel, and because of that, Chanel’s ghosting her. Johnny asks Tripp to tell his sister to stay the hell out of his business now.

Doug and Julie arrive at Sweet Bits. He had a piece of Devil’s Food Cake last night, Doug says. Julie’s trying to get him something healthy. The ladies rush inside to get the croissants as Doug and Julie sample the goods. She says the donuts taste exactly like Alice’s. “I’m sorry my darling but who the hell is Alice?”

Gwen goes home and Jack tells her Doug seems to be like his old self. He asks if they can finish their conversation.

EJ arrives at Xander’s and since he doesn’t have the cash, EJ decides to call the judge.

Chad arrives in Boston and calls Abby’s name. “I’m here. I’m right here,” she says, coming out of a door.