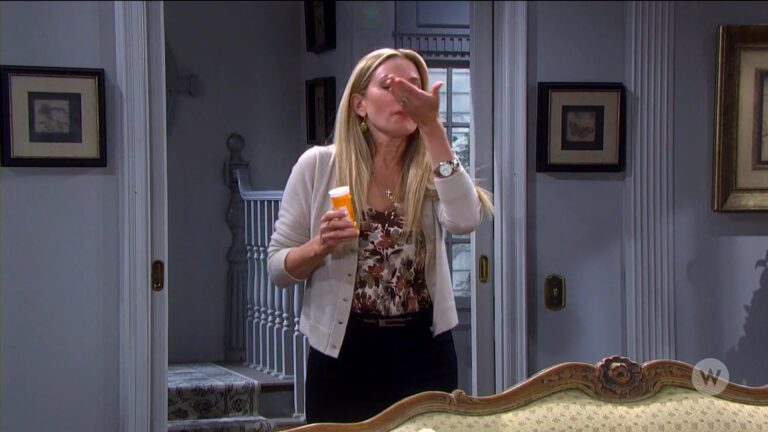 Days of our Lives Peacock recap for Thursday, September 22, 2022. In today’s Days episode, Sonny went off on his brother for betraying him, Jennifer was caught red-handed, and Clyde was the one who stabbed Sonny.

While Clyde and Nancy are canoodling at the Brady’s Pub, Clyde receives a text from his probation officer. He must get his random drug test.

Clyde tells Nancy about the drug testing and that once upon a time, he did some drug dealing.

He claims her love is the only drug he needs. Nancy grins.

Later, they read the news about Leo’s arrest. Nancy’s happy that Sonny and Abigail are getting justice.

Clyde suddenly says he wants to marry Nancy — today. They wonder how Craig will take it. Clyde says he loves her but also doesn’t mind making Craig jealous of them. They agree that Brady will be Clyde’s best man and Chloe her maid of honor.

He goes off to get drug tested as she calls everyone.

At home, Jennifer looks at Abigail’s picture and takes a handful of pills. She sighs in relief as Jack comes upon her. She hides the pills in her hand and he asks what she’s doing.

Jenn lies that she was fixing Abby’s photo, as she quickly walks to it and touches it. She recalls their daughter rearranging things in their house. Jack knows she liked order and hugs his wife she cries.

When Gwen arrives, Jack goes to get the door while she hides the pill bottle behind Abby’s photo.

Gwen visits Jennifer, who is grateful that she turned Leo in, knowing their friends and it couldn’t have been easy to do. Gwen admits her reason behind it. Leo falsely accused her of the murder. Jack says she called the cops out of spite. Gwen admits it but is not sure Leo’s the culprit.

He doesn’t really have the stomach for it and he swears he’s being framed. Jack admits he too has had his own doubts.

Once Gwen and Jack are gone, Jennifer retrieves her pills.

Gwen returns and catches her with them. Jenn calls them antibiotics but Gwen knows they’re opioids.

Her mama used to hide pills behind pictures too and she can see in her eyes that Jenn’s addicted. She offers to help.

In jail, Leo wonders how Gwen could rat him out to the police like that when she knows that he didn’t kill Abigail.

Craig arrives and tells Leo that the first sign of losing one’s mind is talking to themselves, then wonders if it means Leo’s laying the groundwork for an insanity plea.

Leo thinks Craig will burn in hell for what he did but Craig didn’t do anything.

Leo’s the one who hurt him on their wedding day. Leo blames Craig for framing him for killing two people.

Craig scoffs that he’d do that for Leo. He’s not the one framing him. They exchange barbs and his ex takes off.

In the hospital, Sonny’s on his tablet when Alex arrives with balloons. Sonny lashes out at Alex for betraying him.

He’s pissed because Alex has his job, but Alex says Uncle Vic only made him take it on until Sonny’s well enough to go back to work.

Sonny thinks Alex has an agenda, but Alex thinks his brother should be grateful that he’s helping to keep stock prices up.

In anger, he tosses the jelly beans he bought for Sonny and is about to leave when Sonny apologizes. He’s feeling stuck and overreacted. Alex only wants the best for Sonny.

It was enough he lost his chance to run Titan because of Leo in the past.

Stephanie visits Sonny and talks to Alex about some deal at Titan. The press is wondering why Alex bought the company and then sold it back to Titan.

Sonny has a fit since that’s the company that Alex stole from him. Alex says he was just trying to help. He feels his brother’s been plotting against him and kicks him out of his hospital room.

Chad goes to Rafe at SPD to tell him that Sonny remembered the scent of vanilla from his attacker and he smelled it on Craig Wesley.

Rafe says he’ll check into it for Chad.

Chad runs into Nancy and asks about his after-shave.

Clyde runs into Alex at the hospital elevator and swats at his balloons. “Watch where you’re going, son.”

Later, Chad remembers hugging Craig and Clyde standing behind them.

They flashback to Clyde standing behind Sonny in his office, with a knife.

Clyde’s the one who stabbed Sonny.

Note to readers: We’re running a test to see if enough people are interested in reading daily recaps. If there are enough to continue once again with the recaps, we’ll go ahead with it. If not, we’ll add them in point form in the spoilers again.