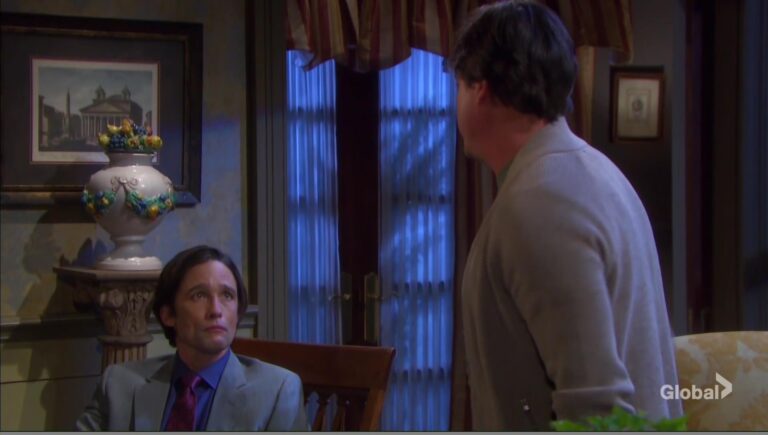 Tuesday, May 11, 2020: On today’s full episode recap of Days of our Lives, Xander and Jake drink together, Nicole and Xander drink together, and Kristen dons a new disguise.

Monday’s episode had Brady requiring surgery after the car accident.

Rafe tells Xander he’s the guy who will decide if he’ll sleep this off here, in jail or at home. He asks about him trying to sell a diamond ring. Xander explains it was Sarah’s engagement ring. Rafe gives him the ring back and lets him go with a warning. Rafe looks at Duke the bear and tells him, “You’re right. I should have arrested him.”

At her apartment, Ava gets help from Nicole in finding a dress to wear for her date with Rafe. She goes to put it on and Nicole flashes to Rafe telling her he doesn’t want her to be a stranger to him. She downs an amber liquid. Ava returns in a red dress and Nicole says, “Nice.” Ava asks if she’s okay with her going out with Rafe. Nic says of course she is. Ava dashes off when Eric calls. She answers, “Is this the man I love?” Later, she yells at him because he isn’t coming home again. She disconnects on him and when he calls back, she ignores him and looks at Rafe’s photo. She drinks some more.

In her room, Jake thinks Kate dumping him is the universe’s way of saying they’re not meant to be together. Maybe he’s looking at the one he’s supposed to be with. A call comes in from Philip. He needs her to come over. There’s a problem with Gabi Chic’s summer line. Gabi is on her way. She tells Jake she doesn’t want to be Kate’s sloppy seconds.

At the hospital, Sami finds it strange that Kate ran off to see Brady when she thinks Lucas has a brain tumor. Sami tells Lucas that when Kristen called, she needed help finding Kate. Lucas worries that Kristen will arrive dressed as Susan and will try to kill Chloe when she finds her in Brady’s room. As they talk, Sami wonders if Kate isn’t really Kate. In Brady’s room, he tells Chloe that Kristen isn’t Kristen. “Kate” appears and asks if he’ll be okay. Chloe says they don’t know yet. “Kate” thinks of the accident and looks upset. Chloe asks why she’s there. She was looking for Lucas after hearing about his brain tumor and saw her. Shouldn’t she be with Lucas? Chloe says her place is with Brady. Chloe reminds Kate that she hates her. Why does she care? “Kate” says her son needs Chloe. Chloe explains that they lied about Lucas dying. She cries over Brady having internal injuries and wishes the person who caused the accident could be there to see their handiwork. Back by the hub, Sami tells Lucas she thinks Kristen is using a Kate mask. “Kate” walks up and Lucas asks, “Mom is that you?” Sami tries to rip her mask off and they fight. “Kate” takes off and Lucas says if that was Kristen, where’s his mother? Kristen rips off her mask and seethes about Chloe, calling her filthy names. Sami goes off alone. Later, Kristen returns as herself to Brady’s room in a surgeon’s scrubs and a mask. Chloe doesn’t even know who she is.

Xander wanders into the pub and finds Jake at the bar drinking. He pulls out the ring and Jake cracks a joke about being fine with marriage equality and that Xandy has nice pecs but he isn’t interested. They drink to the women who dumped them and commiserate. Xander tells Jake to “hurt her before she has a chance to hurt you.” Jake likes that idea and thanks him for the chat. He takes off.

Gabi arrives at the Kiriakis mansion. Philip shows her the one box filled with their designs. Gabi’s confused. There are supposed to be six thousand pieces. Philip urges her to look in the box as he explains that they measured in millimeters instead of inches. Gabi pulls out a dress for a Barbie doll and freaks out. It’s a disaster. Phil says they’re stuck eating the cost. They can’t launch the for summer. Gabi can give them to Arianna. She gets an idea. Parents will shell out a lot of money to dress their kid’s dolls in chic clothing. They’ll go with the launch and introduce Gabi Chica. “Move over Barbie, there’s a new girl in town!” They embrace and when Gabi seems interested in more, Philip reminds her they tried that and she was thinking about Jake. He thanks her for turning their loss into a win and says she can go back to her evening.

Ava meets Rafe for his date at Julie’s Place. He compliments her looks and dress. Ava says Nicole helped her. Rafe’s quiet and admits he’s nervous. Ava admits she’s never been on a date. She spent too much time mooning over Steve and her dad set her up with Charlie’s dad. Rafe stops her. He doesn’t want to discuss past loves. He holds her hand and only wants to talk about them. She grins. Later, she teases him about his love of dental floss. He notices how beautiful her eyes are. “Some detective you are,” she says. She goes to powder something and Rafe notices a missed call from Nicole.

Nicole arrives at the pub and Xander slides his drink to her. She reluctantly drinks it then tells him to “buzz off.” He invites her to tell her favorite ex-husband what has her down. She finds that funny. Later, she pours him a drink and he tells her about his bachelor party and how Rex ruined everything. Nicole says she got married and her guy left. Xandy says, “I’m sure Father Sanctimonious will be back.” Nic tells him Eric’s staying in Africa. Xander asks if it’s forever. Nicole has no idea. They get drunk and Xander says he dedicated his life to being good enough for Sarah. Nicole nods. She was supportive and understanding. “Darling, you and I need to reembrace our dark side.” She doesn’t know about that but she does know she needs to “embrace another drink.”

Gabi returns home and Jake says she and Kate were right all along. He’s wanted to be with her this whole time. Gabi complains that he’s telling her this drunk. He denies it, and repeats that his feelings never went away. He didn’t want to hurt Kate and was proud to admit he was right. Gabi admits she’s still into him and they kiss and rush up the stairs for sex.

Lucas goes to Philip at the manse and asks if he’s seen their mom. PhillyK reveals that Gabi told him she went away. Lucas is surprised since he just saw her at the hospital.

Nicole goes back to Xander’s room at Salem Inn when he invites her with the promise of “teeny tiny bottles.” Sami watches from the square and wonders what the hell that was.