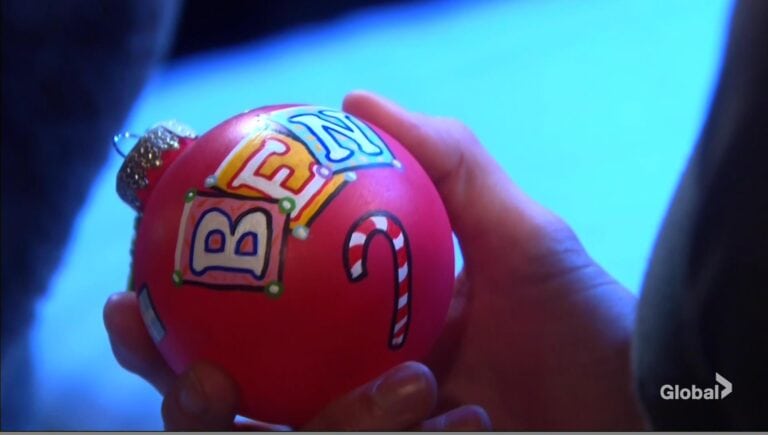 On today’s full episode recap of Days of our Lives, the Hortons celebrate the holidays by putting their ornaments on their tree, Nicole gets bad news about Eric, and Ben receives a gift that moves him.

Nicole’s shocked to see Rafe on her doorstep. She reveals she was expecting Eric. Christmas music plays as Rafe tells her he’s happy for her and gives her some cookies. Eric calls and tells Nicole he’s stranded in Addis Ababa, Ethiopia. His flight had mechanical issues. Nicole understands. She disconnects, disheartened, though she tries to smile. Nicole’s cornish hens are ready, so she invites Rafe to dine with her. He likes that idea better than the frozen pizza waiting for him at home. Nicole tries one of Rafe’s cookies. She had them when she was a kid, and her Abuela made them. Rafe forgot that she was born Nicole Mendez. They talk about his breakup with Hope. Nicole knows the woman for him is out there waiting for him.

Doug wanders into the SPD. He’s there to convince Eli to come home with him for Christmas. Doug reminds Eli that they want him at their “ornament hanging extravaganza.” Eli’s not in the mood but Doug’s pretty convincing. They head home.

From home, Lani lays around in bed and talks to her mom about how she’s staying home for the night. Julie arrives to invite her to the Horton Christmas. She urges her out of her robe and into something festive. Julie tells Lani that Eli’s working late and won’t be there. This is Lani’s first official year as a Horton. She and Doug will be saddened if she doesn’t hang her ornament on the tree. Lani grins and agrees to accompany her.

Ben looks at a photo of Ciara in his room above the garage. Claire arrives to wish him a Merry Christmas. Salem Inn gave her his new address. “Jake offered it to me,” Ben says. The memories at the Inn were too much. Claire gives him a present from Ciara. Ben opens the box and finds his own ornament. Hope had it made for him. Ben’s touched. Claire invites him to Doug and Julie’s to hang it there. Ben can’t crash her family celebration, but Claire reminds him he’s family. He agrees to go.

At Alice’s, Allie watches Jenn open Jack’s gift. “Wow, cool, it’s like a retro time turner.” Jenn says, “It’s an hourglass,” her voice filled with emotion. Jennifer cries as she reads that Jack won’t give up on them. Later, Doug and Eli arrive and moments later, Julie and Lani turn up. Lani’s not happy to see her estranged husband. Eli grumbles at Doug, “Don’t even think of putting us underneath the mistletoe.” Claire and Ben turn up and Eli and Lani go outside to talk. They work at making up and when Julie checks on them, they’re kissing. Julie and Doug swoon, “Sure puts me in the Christmas spirit,” Julie admits. Julie talks about love sustaining them and how it’s important to cherish each other. Jenn puts up her ornament, and Will’s and a few other members of the family who didn’t make it. Allie puts up Henry’s and hers. Bo, Hope, Zack, Caroline’s are up. Jenn puts Jack’s up and sighs. Ben looks heartbroken. Claire hangs her ball and Ben is too overcome, and can’t hang his ball. Lani hangs hers and Eli goes next. Suddenly, Lani gets a pain in her abdomen — her water just broke! Ben returns to the living room and finds everyone left for the hospital since Lani went into labour. Claire tells Ben what happened and he apologizes for running out. She hands him Ciara’s bulb and leaves him to hang it, alone. Ciara appears to him to tell him she’s there with him always. They kiss. Claire returns and Ben tells her he can feel Ciara’s presence.

Allie returns home and learns that Eric’s not coming to visit. Allie’s sorry to hear he won’t be returning for a while, now. Nicole says, “It’s okay,” but Allie knows it isn’t. “But it will be,” she says, holding Nic’s hand for comfort.

At the square, Rafe calls Hope and leaves her a message, wishing her a Merry Christmas.

At the hospital, Julie and Doug sing Hark the Harold Angels Sing, to Lani to distract her from labour pains.

In the next full episode of Days of our Lives, Allie has a confession.