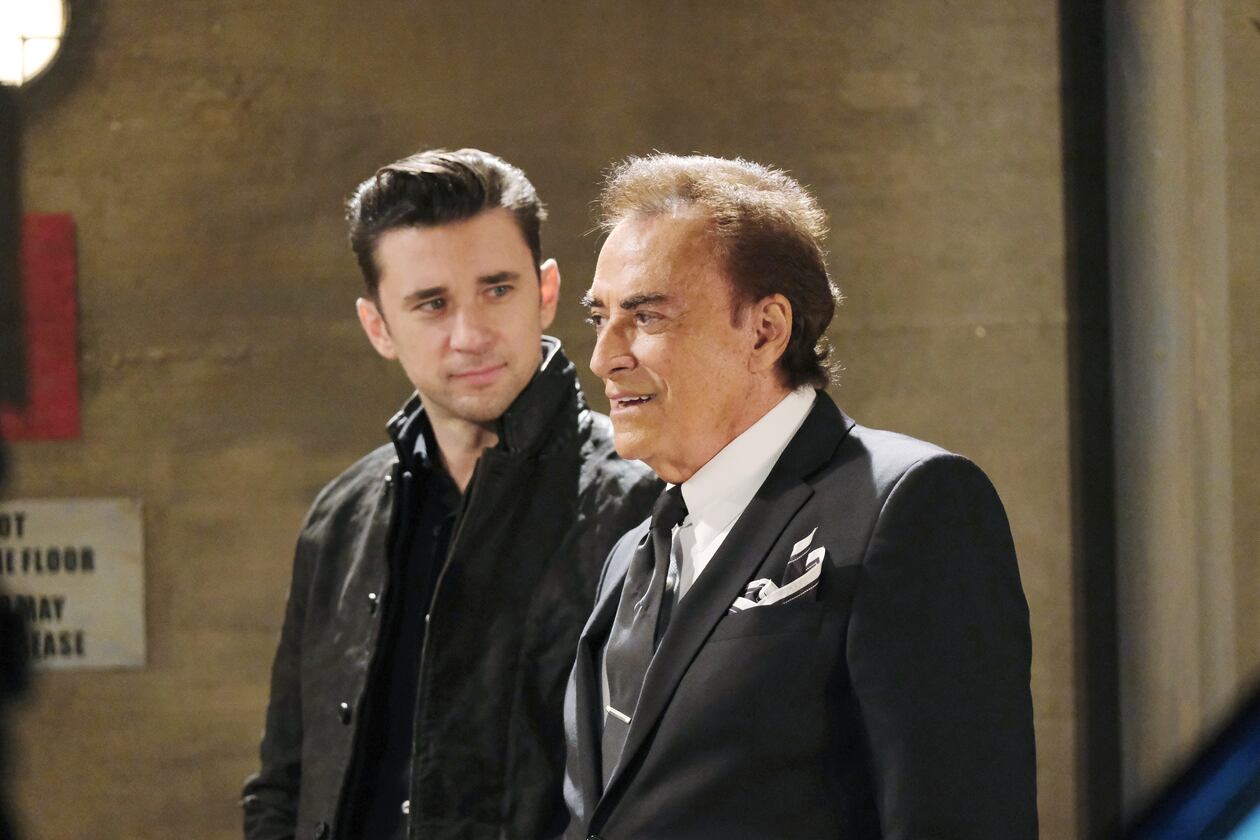 Friday, December 18, 2020: On today’s full episode recap of Days of our Lives, Chad gets a gift from Dr. Rolf for Christmas, Gwen tries to finagle a kiss out of Chad, and Jennifer gets a visit from Lucas.

Gwen finds Chad in the DiMera living room and comments on the Christmas decorations. Gwen asks why Chad didn’t confront Abigail on what they walked in on between Jake and Abigail. Chad didn’t want to make things worse. She walks to the doorway, underneath the mistletoe, and Chad thanks her for her help. He’s starting to get some Christmas spirit back. She’s glad and looks up. “Speaking of Christmas. Oh, dear, we seem to be under the mistletoe together,” she croons. Kate arrives in Jake’s room with a Christmas package. Jake comes from the bathroom in nothing but a towel. Kate grins. She didn’t know he’d be there. “Merry Christmas, Jake,” she says. Jake walks toward her and grins. “Merry Christmas, Kate.” He has a present for her and admits it was difficult to find the right gift for her. Kate flirts that she likes her gifts unwrapped. She undoes his towel and it falls to the floor.

Abigail and Jack finish Christmas shopping at Horton square. They discuss her problems with Chad, and Jack gives her sound advice, but wonders why Chad was so suspicious. Who is putting ideas in his head? Abby doubts anyone is. “Then how do you explain the sudden insecurity?” Jack wants to know. Abs thinks he needs reassurance and she’ll give that to him. Abby urges her dad to give her mother time, and not to give up on her.

Lucas visits Jennifer at Alice’s with some gifts. He’s not sure he can make the ornament hanging. They talk about Allie healing after the rape. Lucas asks if she and Jack will patch things up. Jenn doesn’t see that happening but Lucas reminds her it was just one time. Jennifer says, “It turns out my husband is still sleeping with your mother.” Lucas doesn’t think so. Jenn has evidence and tells Lucas about Julie’s call to Saul. This doesn’t convince Lucas of anything. He wants to go to the mansion to confront his mother. Jenn talks him out of it but she has an idea.

From Statesville prison, Kristen calls Lani and urges her to work things out with Eli. “Merry Christmas,” she says, turning to find Rolf behind her. “Merry Christmas, my dear.” Kristen’s shocked to see him there. Rolf shrugs. He called in a favour. She hopes he’s not going to pull anything. She wants to serve her time. Rolf isn’t there with any nefarious intentions. He has a present for her and hands over an envelope. Kristen isn’t happy he tried to shoot Chad. Rolf regrets it. He got carried away in his devotion to Stefano. Kristen opens her present, which is a photo of Chad, her, and Stefano. She’s overcome and thanks him.

Anna and Tony interrupt Gwen’s mistletoe moment with Chad at the mansion. There are hugs all around and Anna introduces herself to Gwen. Anna says she’ll stay behind and get to know Gwen, while Tony and Chad visit Kristen in prison. Anna pries into Gwen’s life and Gwen balks. Abigail and Jack appear, while back upstairs, Jake and Kate make out on the bed. Later, Abby hugs Anna, while Gwen takes their packages upstairs. Kate and Jake finish making love and Jake slips his towel back on and opens his gift — a red silk tie. Jake loves it. He tells her to go, so she can find her present wrapped. He shows her the gift-wrapping and they kiss. She goes, leaving him smiling. Gwen watches from the hall as Kate leaves. She enters Jake’s room and finds him dressed, holding Kate’s gift. She snipes about him getting  “Granny Kate” a gift. He only ever got her Dollar Store gifts. Jake kicks her out. Downstairs, Anna asks where Jennifer is, just as Kate walks into the room.

Chad and Tony visit Kristen with hugs at the prison. She’s thrilled to see her brothers and asks what brought Tony home. Christmas, of course, he relays. They sit and Chad notices the photo of them. Kristen tells him Rolf has one for him, too.  He’s sorry for what he did to Chad. “Yeah, well, he should be, that crazy old bastard,” Chad says, smiling. He tells Tony that he had just beat Stefano to chess that day. “And he was still speaking to you?” Tony asks. They laugh. This happened when Tony was in the afterlife. Later, Rolf turns up with a photo for Chad and an apology. Chad forgives him. They talk about Christmas and Rolf’s surprised to learn Jake will be there. He knows Chad didn’t want Jake at Thanksgiving. Rolf thinks back to Gwen telling him and lies that Kristen told him. Jennifer must have told her.

At the square, Jenn and Lucas stop Saul (Paul Tigue) outside Salem Inn, to question him if the man who was with Kate last night was named Jack. Saul considers that and says yes, he believes that name sounds right to him. When Lucas shows Saul a photo of Jack, Saul clarifies. That wasn’t the guy. Jenn cries with relief.

Back at the mansion, Anna’s shocked to meet Jake, who looks like Stefan. Chad and Tony arrive and Chad introduces them. “Good to meet you, Bro,” Jake says. Tony balks at the word ‘bro’, but they shake hands. Gwen returns, having wrapped all the gifts. She hands Abigail Jake’s gift for Kate, and Jake and Kate cringe. Abigail pulls out a gorgeous diamond bracelet and thanks Chad, but he didn’t get it for her. Jake says it’s from him. He bought it for Gwen as an apology. Abby gives it to her and Jake helps her put it on.

Jack arrives at Jenn’s with a gift. He says Merry Christmas and goes.

On the next Days of our Lives, The Kiriakis clan celebrates Christmas.