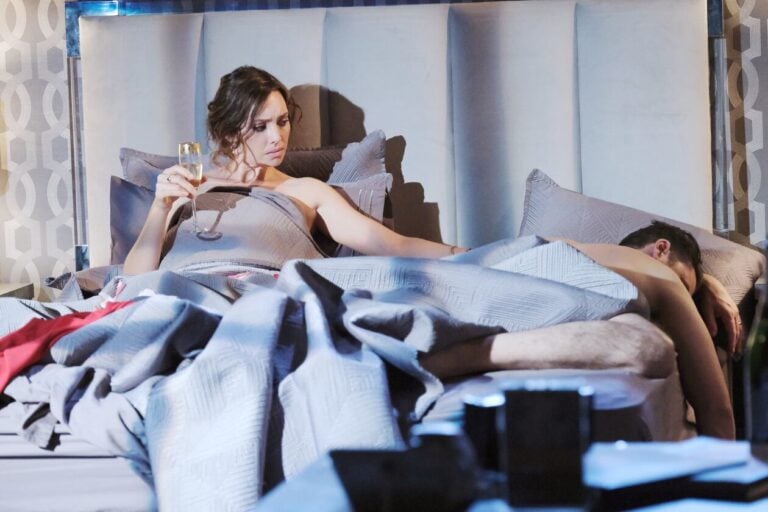 On today’s full episode recap of Days of our Lives,

Anna and Tony kiss at midnight on New Years’ Eve at the DiMera mansion. Anna tells him she used to raise a glass to his urn on New Years’ Eve when she thought she’d lost him. Tony smiles. Abigail interrupts and they ask where Chad is. She doesn’t know and reveals he thinks she’s having an affair with Jake. Tony’s surprised. Abs says Kate’s the one sleeping with Jake. Anna and Tony raise their eyebrows, collectively. Anna doesn’t get it. “Why all the secrecy?” Abs thinks Kate worried that Chad would feel betrayed. They blame Gwen. Anna references “Hand That Rocks The Cradle,” an old movie. Abigail finds that absurd, but then realizes the first time she saw Gwen, “She was in Chad’s arms.” Abigail recalls that Gwen kissed Chad. Anna rests her case. They should search her room to get proof. Abby would rather confront her. Anna drags Abs upstairs to snoop and Tony laughs. “Never a dull moment in the DiMera household.” Upstairs, Anna finds loads of newspaper clippings in a fashion magazine about Abby and her family. They read about when Jack ran for mayor, and when Theo got shot, and when her mama was thrown from the balcony. “She has been stalking you,” Anna says. She goes to tell Tony she was right.

Chad leans in for a second kiss and Gwen backs off. “You had a lot to drink. You didn’t mean to do that,” she says. “What if I did?” Chad says, barely able to sit up straight or keep his eyes open. Gwen tells him they can’t do this and they’ll pretend it never happened. Chad insists that his wife won’t care, since she booked this room to be with his brother. Chad goes off the rails about his wife cheating, and how he plans to bust her. He assumes she’ll blame her multiple personality disorder on it. He starts to blubber and wonders if she’s not really sick. Chad drones on about his theory and Gwen tells him she doubts this. Chad thinks the only reason Gwen was hired was so she could carry on the affair with Jake. Chad cries and tells her to make him forget. Gwen can’t do it. Chad reminds her of everything Jake did to her, and she recalls how he hurt her. She rubs it in that Jake is doing Abs, spurring Chad on more. Chad kisses Gwen and they wind up making out. Later, they’re naked and Chad’s asleep, while Gwen sips champagne and talks about him betraying Abigail.

On the deck of the Bistro, Kate and Jake make out. She was worried she’d have to give Philip “a motherly peck at midnight.” Jake admits that Abigail knows they’re an item. Jake tells her how Abs found out. Kate isn’t thrilled. “Abigail was all over me, like a bum on a hoagie.” Jake says Abs needs to tell Chad because their marriage is in trouble. Kate feels awful. Chad will hate both of them when he finds out. Jake says let him. “He’s like a son to me,” Kate says, worried. Jake doesn’t care. He should be able to give them a Christmas present. Kate muses, “Who cares about that?” Jake does. He’s proud of what they have. He wants the world to know. Kate sobs and Jake tears up. Is she ashamed of him? He winds up dumping her. Inside, Philip looks alone and forlorn. Brady heads home while Chloe elects to stay behind. Brady thinks Philip would prefer to escort her home. Chloe knows Brady would have rather rang in the new year with Kristen, but he’s glad he got to with his friend. Nearby, Philip calls to leave a message for Ava, where he talks about laundering money through Titan. Chloe appears and asks him who he’s laundering money for. Philip denies it at first and then spills that he owes the mob a lot of money. They’ll forgive it if he launders the money through Titan. If he doesn’t, they’ll hurt him or the people he cares for. He explains that Xander thinks something is up and could expose him. “Which could get me killed.” He further explains that this was why he was seeing Sarah. He hoped Xander would attack him and Victor would fire him. Philip asks her to forget what he told her, for her own protection. Chloe reminds him she’s badass. She killed the head of a drug cartel.

Related: Kristian Alfonso back on TV in February

At home, Jennifer and Jack talk about all the times Gwen tried to pry them apart. They had no idea until they tell their stories and compare notes. They start to see some of her manipulations and wonder why Gwen would want to keep them apart. They agree to stop focusing on Gwen and start kissing and head to bed…

In the next full episode of Days of our Lives, Kate confides in Jennifer.