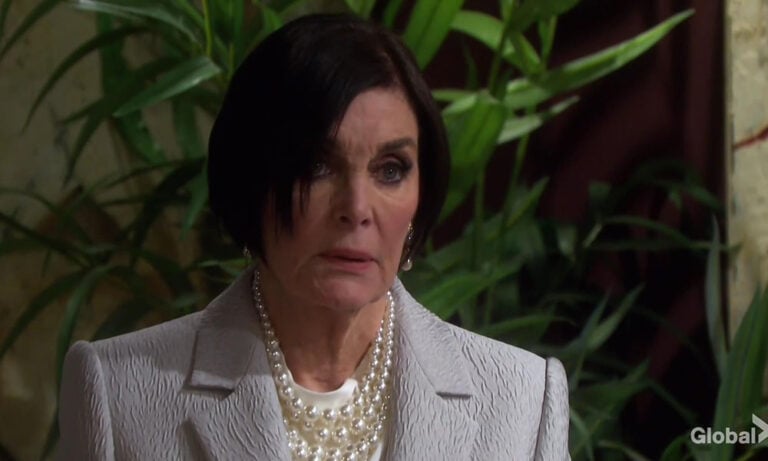 On today’s full episode recap of Days of our Lives, Jack gets a slap in the face after trying to pay Gwen off, Vivian’s grumpy in isolation, and Dr. Raynor tells her story.

At the hospital, Jack writes out a check for Gwen for fifty thousand dollars as Gwen looks on, hurt. She asks how much he spent on Abigail. Jack thinks she wants more. Gwen slaps him across the face. Jack says her mother raised her to hate him. Gwen agrees and admits now that they’ve met, she hates him even more. She rips up his check.

At Alice’s, Laura sobs, confirming that Gwen is Jack’s daughter. Abigail hugs her grandmother. “It’s okay. You were trying to protect Mom and Dad.” Laura blames herself for how Gwen grew up. Jennifer gets her mother a tissue and Abigail hugs Laura before leaving the room. Jennifer is obviously upset but refuses to yell at her mom when Laura begs her to say something, anything. Jack interrupts, surprised to see Laura. Jenn explains that he can discuss Gwen in front of her mother since she knows everything. Jack confirms he’s Gwen’s father. Jennifer asks Laura to tell Jack her story, while she goes upstairs. “This is between the two of you,” she shouts on her way up. Laura details what she told his wife and daughter and apologizes. Jack can’t believe she did this without telling him. Laura says her mother was horrible. Jack yells that thanks to her, his little girl grew up without a father. “Who the hell gave you the right to play God?” He yells. Laura’s sorry and sobs but Jack’s relentless. Soon, she goes and Jenn comforts Jack.

In Chicago, Dr. Raynor explains that the person who blackmailed her knew about the babies in October. “It’s someone we know,” Lani says. Raynor doesn’t know the man’s name. Lani snipes that Raynor had better give her something. Eli tries to calm his wife down and gets more details from Amanda. She brings them to her hotel room and they find the payoff money. She admits she only bought groceries with it. She’s afraid to buy a plane ticket and to leave. Eli goes to see the video footage of the night of the kidnapping but it’s been erased and the man who was on duty was let go. Eli thinks the man must be close by. Raynor recalls the man said, “It’s me Madame, I’m on my way home,” on a call outside her door. Lani thinks Vivian has their kids.

Ivan arrives at Vivian’s place. She’s upset that he turned up on her doorstep and lashes out before apologizing to him and explaining that she feels so alone in isolation since nobody knows she’s alive. “You are not alone. You have me. ” She says, “It’s really the same thing.” He tells her she’s no longer alone and shows her the babies. He borrowed them for her. Vivian asks, “Why in God’s name would you do that for me?” Ivan thought his Madam would be overjoyed. He pours himself a drink. “Did you forget to take your medication again?” Vivian asks. Ivan feels terrible that she can’t see her son since she can’t go anywhere. Vivian sighs, still no closer to learning about why the twins are there. Ivan brought them there to atone for his lie about her own twins. Vivian asks if this is a mulligan. He offers to help. Vivian calls to God and asks who the children and their parents are. Ivan lies that the parents are in no position to care for them. They need a mother. Vivian reminds him that when she had her kids she was thirty years younger. Vivian calls this a Federal offense and when Ivan refuses to give her their phone number, she knows this isn’t on the up and up.

Chad arrives at Salem Inn. He told the police that Abigail didn’t lay a finger on her. “Of course you lied,” she says. Chad calls her stupid. He’ll do anything it takes to bring her down. He grabs her and wipes off the makeup from her fake black eye. “Case dismissed.” Gwen smirks, calling that case small potatoes. She suggests there’s more in store for his wife. Abigail walks into the open door and Gwen confirms she is her sister. Abby knows but says she was wrong about their father. He didn’t pay off Tiffany. Abigail knows who did and says their father knew nothing about her.

On the next full episode of Days of our Lives, Ben vows to find Ciara.