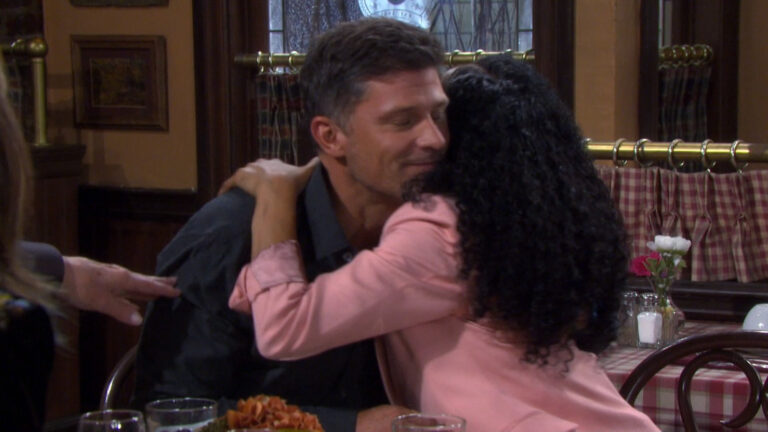 In today’s Days episode, it’s Thanksgiving in Salem and Jada has made a decision, Nicole and Rafe say goodbye, and Abe and Allie bring Thanksgiving to SPD.

In the last Days recap, EJ’s plan to rescue Susan went terribly wrong and ended in a fiery crash, Bonnie tried to remember everything about Mr. Clown and Xander tried, but couldn’t reveal that he was the kidnapper.

At the pub, Roman jumps on a call with Kayla.

She fills him in on how devastated Tripp is because of his mother’s death.

Roman updates his son. Eric tells him about Jada’s pregnancy.

Roman can see it wasn’t planned. Eric’s always wanted children but they’re not on good terms.

Eric reveals he and Nicole decided to reconcile.

Roman’s not surprised and calls his son’s happiness is important.

Eric calls the pregnancy a surprise. A blessing but bad timing.

Roman asks if he’d want to raise a kid with Jada. Eric would but because of Nicole, it’s a mess.

Upstairs, Kate visits Jada who congratulates her on her wedding.

Jada says it’ll be uncomfortable since Eric and Nicole are reunited.

Kate had no idea but she understands why she’d want to make a clean break. Jada says Eric knows about the pregnancy.

But she’s not looking to trap a man who wants to be with someone else.

Kate admits she was encouraging Eric to reunite with Nicole before Jada came along.

She knows Eric has feelings for Jada. Kate doesn’t think she should give up on him so easily. Jada calls it a done deal, but Kate knows they’ve broken up a few times. “Fight for him.”

Jada appreciates her input but it’s time she decided on whether or not she’ll keep the baby.

“So you’re thinking of terminating the pregnancy.” Jada believes in a woman’s right to choose, even though she grew up in the church.

If Nicole wasn’t in the picture, she might have been happy to raise the baby with him.

She’s unprepared to raise a baby alone. “I was thinking maybe I shouldn’t have this baby.”

Since Jada’s staying the rest of the month, Kate invites her again to dinner. She says it’ll be awkward but it’s Thanksgiving.

It’s always awkward. In the end, she tells Jada about the pregnancy, “It’s your body. It’s your decision.”

Kate appears downstairs. She doesn’t think that Jada can feel worse about conceiving a child with someone who is in love with someone else.

She mentions that she invited Jada to dinner. Jada appears and says she’d like that.

Roman and Kate give them space and Jada now has clarity about their situation.

She’s made a decision.

Nicole arrives at Rafe’s house to drop off his key. She looks around, and flashes back to Rafe asking, “What do you think? About you and me?”

She kissed him in response. Rafe appears. He told Eric he’d send her things to the pub.

Nic doesn’t think he has to do that.

She wanted to avoid…this. Rafe says that’s so her. Always taking the easy way out.

She heard about the accident last night.

She feels terrible about what happened to Ava. He does too.

He can’t imagine what EJ’s going through.

Later, Nic returns with suitcases. She’ll send the rest later. Rafe chops vegetables and they talk about Holly’s confusion over the split.

She’s with Maggie until they find a place to settle down. Rafe’s making Thanksgiving dinner for Ari and Gabi.

Nicole’s sorry. She was supposed to make her mom’s pie. He sent Gabi to Sweet Bits but they’re closed.

She looks miserable as she dons an apron. Rafe asks about the divorce. She hasn’t thought about it.

He wants to get it done after the holiday. He won’t fight her. They’ll call it irreconcilable differences. She tears up.

Once the pie is done, she gives him instructions on how to cook it. He thanks her. It’s awkward. She tears up that this is goodbye for them.

She’s sorry. She wants to be friends, to resume what they had before things got complicated.

Rafe doesn’t see how that’s possible. At least not now. She cries as she takes off.

From home, Allie talks to Tripp on a call. She tells him Chanel is still in custody and is sorry about his mom.

Abe arrives. They talk about how Lani misses her family but that Chanel’s getting support.

Allie explains she got to see Chanel. Abe says Paulina’s there now. She asked if he’d come to check on her.

They’ve been talking about their future and now she worries they don’t have one. Abe says it was an accident.

It’s the cover-up that concerns him most. Paulina meant well but that could be a problem. Allie hates that they’re going through it.

Abe holds her hand. They need to be strong. They embrace.

He decides that since he hasn’t stepped down as mayor, he’ll pull a few strings to spend the holiday with Chanel.

Paulina arrives at SPD and hugs her daughter. They wish each other a Happy Thanksgiving.

They argue about whether or not she’s a murderer.

Paulina stands up for her but Chanel says she was smart enough not to sleep with a married man.

“He preyed on you, Chanel.”

Chanel says it doesn’t change that she pushed Martha Bedford.

Again, Paulina says it was a tragic accident, no matter what the spiteful daughter says.

Paulina tells her Sloan Peterson is the daughter of Nathan and Martha.

Chanel realizes there was no mystery client.

Sloan was blackmailing them to avenge her mom.

Paulina fills her kid on the rest of the story.

She’ll get her out of this mess.

What if she doesn’t want to be with her?

She kisses her girlfriend.

They say they brought Thanksgiving dinner to them.

They eat and Allie feeds Chanel a little. They laugh.

Later, back at the pub, they’ve eaten dinner, and Jada thanks them for including her. They give thanks.

Roman’s grateful Katie was able to make a full recovery and became his wife.

They kiss. Kate’s grateful for being there and married to her love.

Also, she’s thankful for her children and grandkids and that they’re healthy.

She wishes they were there, but she’s grateful for everyone at the table.

Eric’s thankful that Jada’s decided to keep the baby.

They’re going to raise the baby together.

They hug and Kate and Roman seem happy, though Nicole walks up and overhears, looking disappointed.