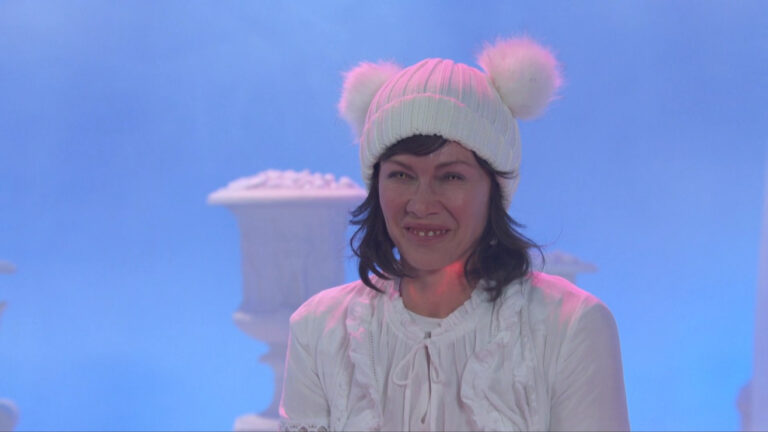 In today’s Days recap, Stephanie gets a visit from Paulina, who hires her in the fight against Sloan, Eric and Sloan have grief sex, and Marlena’s bothered when Kayla’s not to be found in heaven, while Susan isn’t who she seems to be.

In the last Days recap, after Marlena’s death, her children and grandchildren remembered her influence on their lives, while Allie caught Johnny and Chanel about to kiss, Eric turned his back on God and started drinking and Marlena’s soul left her body and journeyed to the hereafter.

Alex drinks alone outside The Bistro and stares at photos of him and Stephanie before calling her.

She ignores his call as she drinks wine at home.

He leaves a message, calling himself a jackass while he grovels.

Stephanie learns  Marlena died via notification on her phone before Paulina arrives with food and her condolences.

She’s also there to ask for her connections now, more than ever. She tells her about Sloan’s civil suit.

Chanel could lose the bakery and she could take her to the cleaners. She needs to know Sloan’s strategy.

She wants Alex’s help. Steph groans. “Tell him to suit up or strip down.”

Steph says she’s broken up with Alex and the reason why. “Oh boy!” Paulina says. She sides with the brunette.

She doesn’t need a man sneaking around, trying to arrange her life. She asks her to bring Chad on board to help them fight against Sloan.

She comments that Chad’s not bad looking. She asks Steph not to focus on not being able to say goodbye. She’ll never get out of that rut.

She should think of all the good times. They embrace and once Paulina’s gone, Steph cries and later thinks up strategies for dealing with Sloan. She listens to Alex’s message.

At Brady’s pub, Eric cries as he drinks shots, wondering what he’ll do without his mother.

Johnny and Chanel are at the park when he gets a notification on his phone that Marlena’s dead.

He lost her, Susan and Kayla and she thinks when her Big Momma dies she’ll be a mess.

He inquires about what happened between her and his sister. She looks around.

It’s obvious since she’s alone. She can’t get over what she walked in on.

Johnny tries to tell her it was nothing. She should blame him.

He is the one who tried to kiss her. He tells her he decked Tripp and Wendy’s livid. Chanel can see he’s mad at the world right now.

He apologizes for making a pass at her. He won’t do it again.

She hugs him, calls him special and is sorry he’s hurting.

Allie runs into Abe at the hospital and they give each other condolences.

He offers to talk but she wants to walk. She directs him to the roof where John should be.

John cries on the roof as he talks to Doc, telling her he knows she’s in heaven.

Abe appears and tells Abe they were looking at family photos on the projector.

She wanted him to take her home. This was a compromise.

Abe knows he made her happy. He thinks she’s “up there” wanting him to be strong but he swears he’ll never get past this.

He cries. Marlena’s been through so much. They beat all the odds.

He asks how Abe went home to an empty bed without Lexie. Abe hugs his friend and invites him to stay with him tonight.

John needs to be at home, to be in their bed and smell her perfume. Abe goes and John smiles as he turns off the projector.

Marlena opens the white doors to heaven and gasps when they shut behind her.

She’s not sure where she is. She calls John’s name. She hears Susan’s voice.

Susan comes stumbling out. Marlena cries, thankful she’s alive and well. Susan’s fit as a fiddle but she’s not alive.

She laughs about the accident and getting blown to bits.

It dawns on Marlena that she’s dead too. Susan says Kate and Kayla are dead too.

She looks around but says nothing. She offers a tour. “You think Kate made it through the pearly gates? That jezebel broke every one of the ten commandments,” she says, producing a bible out of thin air.

Marlena knows Kate’s done some bad things but underneath, Kate’s a good person. She asks to see Kayla.

The bible turns to some paperwork. She finds Bo’s name with an asterisk beside it.

She’s not sure what that means. She continues to look but can’t find Kayla. Susan thinks her paperwork probably didn’t come through yet.

She got to talk to Elvis Presley and take a selfy together. She goes on about that and admits she’s there for Marlena to help her make the transition to the other side.

She says everyone gets a guide to help accept where they are. Susan had a devil of a time knowing she wouldn’t see EJ. She knows letting of John Black won’t be easy.

Marlena tears up. John must be in so much pain. “He is. He’s crushed,” Susan agrees, but he has the kids and friends. Marlena sobs and Susan gives her a mocktail before she goes through another door.

Once Marlena’s gone, Susan takes her glasses off and her eyes are gold. She laughs maniacally.

Eric winds up at Sloan’s place, banging on the door. She answers.

“At least you didn’t bring a kid with you this time,” she snarks. He tells her his mom died and she’s sorry.

She knows what that feels like. She asks if he wants to sue the hospital or the doctors.

He says no. It was the virus. They couldn’t find a cure to fix it.

She’s confused. Shouldn’t he be with family or someone he cares about? He cares about her.

She reminds him they’re just a one-nighter. What does he want from her? He goes at her, kissing her.

They have sex and talk about her mother and he’s sorry if it felt like he was using her.

She says he needed her and she’s unused to feeling needed. She isn’t sure how to comfort him.

She only knows how to take revenge. They go at it again.

Alex finds Allie meandering through the square and hugs her. He heard the news.

He takes her home. Once at home, he’s surprised when she reveals she thinks her girlfriend is with Johnny.

She gets them beer and downs hers. He calls Marlena an institution.

He tries to stop her from drinking and wants to call Chanel. She tells him something is going on between her and her brother.

She explains they almost kissed. Alex thinks she should try trusting them. Chanel chose her, not Johnny.

Talk turns to his problems with Stephanie. He gives her the Cliff’s notes and she sides with him.

If Steve had called, he would have told her to answer the phone. He made a mistake.

Chanel arrives and Allie taunts her, saying Alex came to comfort her the way Johnny was comforting her.

Paulina meets Abe in the square.

They embrace and talk about John.