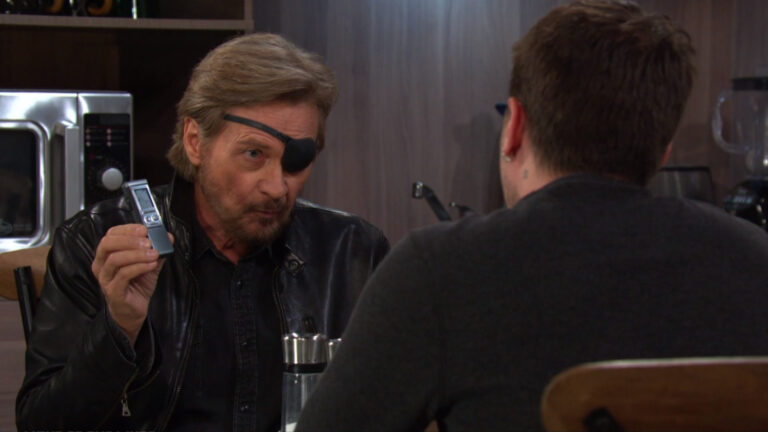 In today’s Days episode, Joey and Tripp share emotional memories of Kayla as they return to Salem, and Brady is outraged by Gabi’s request, while Steve manhandles Kristen.

At the hospital, Brady’s on a call with Tate, who is afraid his grandma will die.

Brady tries to get his son to think good thoughts and thanks him for checking on them.

He says I love you and disconnects. Gabi turns up. She needs to see Marlena.

She needs Marlena to have Stefan’s brainwashing undone.

“Are you out of your freaking mind?” Brady asks. Stefan’s not a priority.

She’s surprised he has no compassion for a brainwashed man.

She knows Marlena would want to help. Brady says, “Marlena wants not to die.”

They argue and Chloe turns up to see how Marlena is and see if she can help.

Brady shows Gabi that this is how one acts. Not selfishly.

Gabi tells Chloe that Stefan wants to be reprogrammed. She’s confident he’ll dump Chloe after. Once she’s gone, Chloe is filled in on what she wanted.

Chloe’s shocked at Gabi’s actions and knows Brady wants an answer about whether or not she’ll reunite with him. She’s confused and cries.

They make out like crazy and then she pulls away, panting.

He apologizes but she says it wasn’t wrong. She can’t do this and runs away.

At Salem Inn, Li talks to his father on a call, reassuring him that though he made Stefan an enemy, he can handle him and the police won’t find out what he did.

Li thinks they can talk things through but Stefan punches him in the face.

Li knows he deserves it but violence isn’t Stefan’s MO. He agrees.

He gets Li some ice, though he’s tempted to hit him again. Li says if he tells anyone he said this, he’ll deny it but he’s sorry.

He was desperate. Stefan knows but in his case it wasn’t just brainwashing but attempted murder.

Li admits he did pull the plug. He wasn’t in his right mind, though it was reprehensible.

It was a moment of madness. Stefan wants to know where Rolf is but Li denies knowing.

He’d tell him. Stefan says if he finds out he’s lying, the punch will feel like a pat on the back compared to what he’ll do to him next.

He fires him but Li points out that EJ’s the only one who can do that. Stefan says to EJ, nothing is more important than family.

He goes and Li snarks that EJ will want to cover his ass.

He calls Rolf from a burner cell phone to update him about keeping quiet and why he had to move him.

He then calls EJ to blackmail him into keeping him at DiMera.

Stephanie lays on the sofa with a box of tissue and a note from Kayla that she made the pie for her. Tripp and Joey turn up and the siblings embrace.

She’s glad they’re there and tells them their dad went out early.

Tripp goes to see his mother since Steve’s not home.

Joey sees the note from his mom and she tells him those were her last words to her.

Someone robbed her of a chance to say goodbye.

She tells him what happened with Alex and thinks their mom was thinking she’d get better and blew her off.

Joey denies that she’d ever think that.

She never should have gotten involved with him. Joey agrees.

They talk about their mother and find a way to go on without her.

Steve arrives at the DiMera mansion and Kristen looks worried.

She tries to close the door but he gets his foot in there.

She runs into the living room and he follows and grabs her.

It’s time for her to pay for what she did to his wife.

Kristen says he doesn’t need to do this.

She feels sorry for him and is sorry about his wife. Steve calls her a selfish, pathetic psycho.

She held three lives over Brady’s head while the virus was ticking away.

She claims she cared but he denies that. If she wasn’t so cold-blooded and deranged, the women would be home.

She took away the love of his life, the mother of his children and she’s going to pay.

She grabs things from the coffee table and hits him.

He grabs her and forces her into a chair before strangling her.

Wendy meets Johnny at the pub. He was there to check up on his uncle Roman.

He lost his wife and sister on the same day. She calls it unimaginable.

He insists he’s fine, though but she thinks it’s clear he hasn’t slept and doubts he’s eaten.

She urges him to take care of himself.

She knows it’s bad with Marlena but she beat the devil, twice.

He asks what happened with Gabi. She says that didn’t go over well.

She tore into her and threw her out.

Wendy runs into Tripp outside the pub. They hug and she’s sorry about his mom and aunt. They talk about her brother. He’s sorry.

She says she’s learned to stay out of people’s love lives.

He’s headed to see Roman and then he’ll see his mom at Bayview.

She offers to go with him but he can handle it.

They may not even let him in. It’ll depend on how she is doing.

He doesn’t think she’s had a visit since she’s been in.

He knows it’s understandable but he can’t abandon her. She understands since she can’t desert her brother.

Outside Salem Inn, Stefan runs into Gabi. They talk about deprogramming him.

He reminds her he loves Chloe. She’s who he wants whether they find Rolf or not.

“We’ll see,” she says, telling him she tried to get Brady to let Maralena deprogram him.

Stefan’s shocked at her selfishness.

Marlena’s dying! They argue about this but Gabi doesn’t get it.

He calls her names and is starting to feel glad Rolf brainwashed him so he could get away from “a bitch like you.”

Li rushes up and yells at Stefan to leave her alone.

Johnny arrives at DiMera mansion and stops Steve from strangling his aunt.

Steve reminds him she killed his grandma and aunt. His grandma might be next.

Steve goes and Kristen thanks Johnny who didn’t do it for her.

“I did it for Steve.” He’s the only parent his kids have left and thanks to her, Roman is shattered and Marlena’s clinging to life.

He doesn’t care about what Steve did to her. Once he’s gone, Chloe shows up.

He says it was just an act, though. Johnny DiMera interrupted and he planted a bug while Johnny took care of Kristen.

He recorded everything. He plans on giving Rafe what he needs to send Kristen down the river.

He lets his son listen to Kristen confessing she hid the orchid, knowing the women would need more dosages of the serum.

At the hospital, Johnny tells Brady that he walked in on Uncle Steve trying to kill Kristen.

Brady can’t blame him. Johnny doesn’t, either. She’s wronged so many.