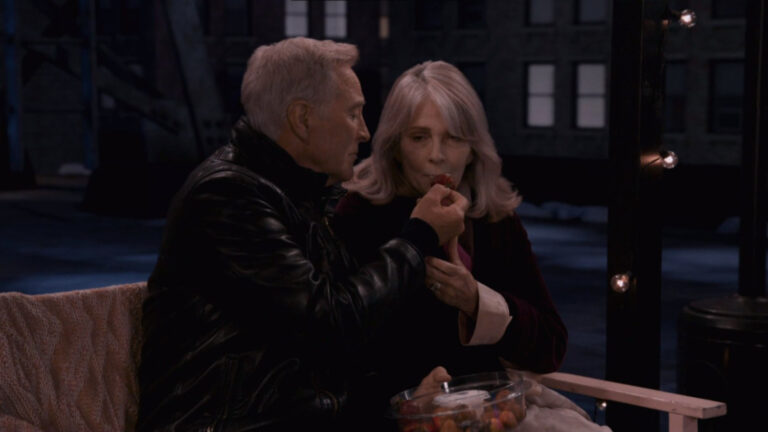 In today’s Days recap, Johnny and Chanel reconnect as they help John with a surprise for Marlena.

In the last Days recap, Kristen prepared to flee Salem with Rachel but was arrested and Belle returned home to be by ailing Marlena’s side.

At the townhouse, Kristen’s rights are read to her and she struggles. She didn’t murder anyone.

Rafe reminds her of what she did to indirectly cause two deaths and Brady tells her about the recording.

She assumes he’s bluffing and Brady says she’s getting what she deserves.

She’s taken away. He calls Belle for an update on their mom and then Rachel appears.

He says Mommy was in trouble. She was going to take her on a trip without his permission and she’s done some bad things.

Rachel reacts with shock, saddened by the news.

Who will read her bedtime stories? She rants and doen’st wat him. She wants Mommy. She races to her room.

At the hospital, Johnny’s on a call with Uncle Steve about the arrest.

Chanel appears to see how Marlena is and to give Allie support.

In her room, Marlena cries when John says he can’t take her home.

She doesn’t want to die there. He tells her the doctors are buying her time but she tells him they’re out of time.

She wants to go home and reminds him he’s been through this before.

John says she had time for him to take her to Venice but Maralena’s only asking for across town. She begs and he compromises.

John finds Johnny with Chanel and asks for their help. He returns to Marlena and tells her someone is going to set up something for them. He wants to surprise her. He calls it an adventure of a lifetime.

Back at the DiMera manse, Stefan learns Kristen was arrested.

EJ looks concerned. For himself. Stefan asks why EJ let her move back in.

When she’s gone, the men play chess. Stefan gloats about being a chess champion.

At SPD, Rafe and Jada play the confession recording for Kristen.

She calls it a deep fake. “Nice try,” Rafe says.

She calls EJ, who has barely started the chess game. She wants his help in getting her out of jail, reminding him he has a law degree.

He’s busy. She blackmails him again that she’ll sell him out to Stefan.

In the outer room, Rafe brings Jada some of Caroline Brady’s special pie for doing a great job.

They talk about how the DiMera’s area experts at eluding justice. Rafe assumes Kristen’s talking EJ into doing that now.

They discuss how poorly Steve’s doing.

In the interrogation room, Kristen’s on a call with EJ who says the CEO of DiMera can’t get involved so he can’t be her lawyer.

She’ll call Stefan then. He puts her on speaker and invites her to talk.

When she won’t, EJ tells Stefan the truth, that he knew Li had him brainwashed and he kept it to himself.

Kristen calls EJ an idiot but he won’t be her lawyer.

He disconnects and Stefan seethes as EJ explains it was a business deal. Stefan reels as he puts it together.

EJ admits it’s been held over his head and he’s glad it’s out, even if it means dealing with the consequences.

Stefan thought he found an ally in his brother. He pounds the chess table and rails on his brother. EJ says his intentions weren’t to do that but he couldn’t have Gabi control the company.

EJ knows that’s a crap excuse. He’s sorry. Stefan says at least he wasn’t involved in the brainwashing. He thinks their father would have approved.

He’ll forgive him under one condition. He wants to be co-CEOs. EJ says Shin’s being terminated at the company in the morning.

They’ll make the change then. They shake on it and EJ thanks him. He goes upstairs and Stefan stares at the chess board, saying that he’ll get EJ who won’t see him coming.

He drinks Grappa and looks at Stefano’s portrait.

Meanwhile, Jada and Rafe go to Kristen who wants to cut a deal with what she knows about Li Shin.

She wants murder off the table and immunity. Rafe tells her to start talking and they’ll see.

On the roof of the hospital, Johnny sets up a blue tooth projector and Chanel sets up some lights.

She talked a store into giving them their window display.

They didn’t mind since Marlena was a regular customer. They discuss her case.

She tells him about being sued in civil court. He’s sorry.

Sexy guitar music plays as he says just because they’re not married doesn’t mean he doesn’t care about her.

She asks, “What about Wendy?” She reminds him they’re a thing. He says they’re not really dating. It was a cover for their investigation into Li Shin.

He tells her about helping Gabi to find out what happened to Stefan.

She heard about it coming out at the wedding. As they talk, they decorate a bench and the surrounding area.

Chanel falls off a chair and Johnny catches her. They lock eyes and hold each other.

They’re ready to kiss when John wheels Marlena up.

He hands over the remote for the projector.

They joke that Johnny drives around with it in his car.

Chanel gives Marlena chocolate-covered strawberries and she blesses their hearts.

They kiss her and Johnny tells her he loves her.

She says it back and the men embrace and Johnny goes. Jarlena kisses.

They sit on the bench and eat strawberries.

He feeds them to her and tells her Johnny uploaded family photos to the cloud so they can reminisce.

They look at family photos. She wonders where the time went.

They want to do it all over again.

She cried and he holds her close. They keep watching the images and Marlena dies.

Downstairs in the hospital, Chanel can see where Johnny got his romantic side from. He chokes up and says he could see it in her eyes. She knows what’s coming. He’s not ready to lose her.

Johnny drinks as he tells Chanel he tries not to cry because it always makes his throat dry. She thinks he should let loose. They hug.

Chloe arrives at the townhouse as Rachel runs to her room.

He lets her know about Kristen’s abduction attempt and the arrest.

He doesn’t know how to tell his daughter that her mother may be in prison for the rest of her life.

Brady tears up. He can’t believe this is happening to his kid.

He feels powerless and neither is sure Kristen’s being honest about not knowing where the orchid is.

Chloe hugs Brady as Rachel stomps into the room and tells her to get away from her daddy.

She blames Chloe for her mom going to jail and Brady tells her not to talk to Chloe that way. He says her mother lied.

He tells her he loves her and to go to her room.

When he comes in, they’ll get some things straight. After she’s gone, Chloe’s not sure they should be together.