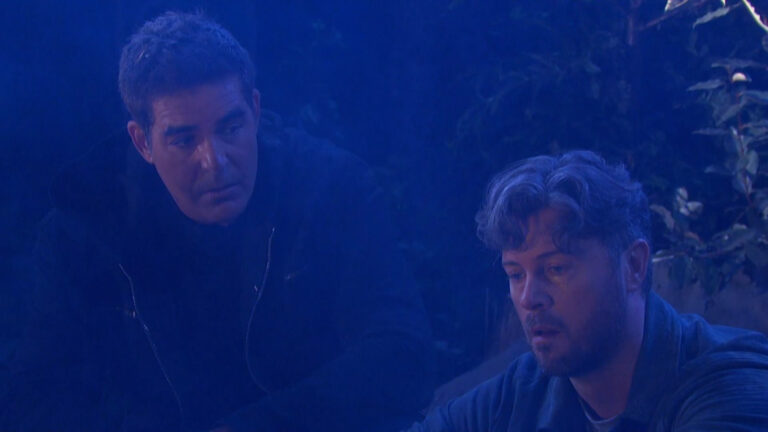 In today’s Days episode, EJ’s devastated at the loss of his mother, Wendy and Johnny turn the tables on Rolf, and Gabi tries to make Stefan jealous again, though Chloe and Stefan don’t notice.

In the last Days recap, EJ’s plan to rescue Susan went terribly wrong, Bonnie tried to remember everything about Mr. Clown and Sarah had no clue what Xander has been up to.

Stefan and Chloe race to the square for dessert but Sweet Bits is closed.

She had a lovely time as did he on their date. They kiss as Gabi wanders up.

She interrupts and gives them invitations to the wedding.

They’re surprised that she wants them there. Chloe says they may be going to Miami but Gabi thinks Li would want her there.

Stefan gives her one of the invitations back. Chloe will be his plus one. “How nice,” Gabi snaps, with a fake smile plastered on her face.

Li stands around waiting for his sister to call when Rolf calls using her phone.

He reveals that Wendy knows what they did to Stefan. She’s indisposed right now so can’t talk.

They’re passed out on gurneys.

Li reveals his need to tell Gabi everything. Rolf’s excited.

He needs vocal cords for his next project. A set of two would be wonderful.

Li balks at that. He has a better idea. Inside the lab, Wendy and Johnny awaken.

At the no-tell-motel, Sarah is paranoid, thinking she saw a roach.

Xander flashes to kidnapping Susan and nods his head. “Yeah. One without feeling.”

He tells her he’s done something terrible. She asks him to tell her.

They’ll figure it out. Xander flashes to telling Susan that Sarah will never forgive him.

He keeps flashing back to Susan. He says, “I quit my job.” This surprises Sarah.

He had no choice. She hugs him and they kiss and fall into the bed.

After sex, he says he wants to be proud of how he makes a living.

She’s encouraging. He goes and showers while she watches a car squeal tires on TV.

From the Salem Airfield, Rafe puts an APB out on Ava and Susan.

He then calls the FBI with the news. He gets a call that there’s been a crash and takes off, damning Ava.

From the road, Ava is distracted and angry as Charlie tells her EJ’s going to catch up soon.

In his own car, EJ snipes that he gets to decide what to do with Ava.

Charlie says they can be together forever and s he can still hurt EJ.

Ava swerves into the other lane and goes over the cliff as EJ screams, “No, no, no, no, what are you doing?”

EJ stops his car and screams over the cliff for his mother.

Rafe finds him ready to jump and demands he not do it.

They struggle and Rafe says the rescue crew is on the way and has a better idea of finding her.

EJ struggles some more and the car blows up into flames.

They fall back from the force.

EJ gets up and says not to stop him. He crawls over the cliff and Rafe follows.

The rescue crew arrives and tells EJ that there was no way anyone would have survived the crash.

EJ and Rafe sit side-by-side. Rafe offers condolences and a ride to SPD for his statement about the kidnapping.

At the mansion, Stefan tells Chloe that as soon as they said their vows, she kicked him out of the mansion.

He knows Gabi doesn’t want to marry Li. He can’t wait to figure out what she’s up to.

He assumes she’s trying to claw her way back to the top at DiMera.

Chloe doubts it. She thinks Gabi’s marrying Li for love.

Stefan thinks she’ll regret the wedding and seeing them holding hands in the front. He laughs.

“Why do you want to hurt her?” He claims he doesn’t.

He wants to get through to her. That’s it. “I don’t care about Gabi enough to hurt her,” he says, claiming he doesn’t care who she marries.

He only cares about Chloe They kiss.

He wants more and she stops things.

She realizes she has to move on and they make out until Stefan’s so happy to be getting some, he stops kissing her and shows his excitement.

EJ strolls in and goes to the drink cart.

He takes a drink and Stefan gets up to ask if he’s okay.

Was he in an accident? EJ says no but his mother was. “She’s dead,” he says.

Chloe clutches her heart and Stefan says, “No.” EJ throws his glass at the fireplace and falls to the floor.

Gabi questions him. He reveals that she and Johnny commandeered the jet and took it to Indonesia.

He lies that he has no idea why and says they were never that close. “Right,” Gabi says.

What’s he afraid she’ll bring back?

He covers and says he’ll fire her when she returns. She thinks his sis and Johnny are cute together.

Li calls him a spoiled brat. Gabi’s surprised he is so angry.

She convinces him not to fire her and he starts to relax.

“No real harm was done,” he says. They look at the invitations and kiss, thinking about their New Year’s Eve wedding.

Back in Jakarta, Rolf goes to Wendy and Johnny.

He gets rid of the recording Johnny made, melting it in a machine.

Wendy demands to talk to Li but Rolf says she just missed him.

Wendy asks if he has a soul. He asks why they’re there for a person who means nothing to them.

They tell him that Stefan was the love of her life and now wants nothing to do with her.

Hasn’t he known someone who he loved? They ask to let them go.

They’ll tell Gabi the truth. Rolf calls them fools. She did know the truth but she forgot. He shows them the syringe filled with CRS 17.

They ask what that stands for. “Can’t Remember…Stuff,” he says, with a maniacal laugh.

He moves to inject Wendy and Jonny somehow makes it out of his binds and knocks Rolf out.

When he comes to, he’s tied up on the gurney. They leave him there yelling, “Nein, nein!” (No, in German)