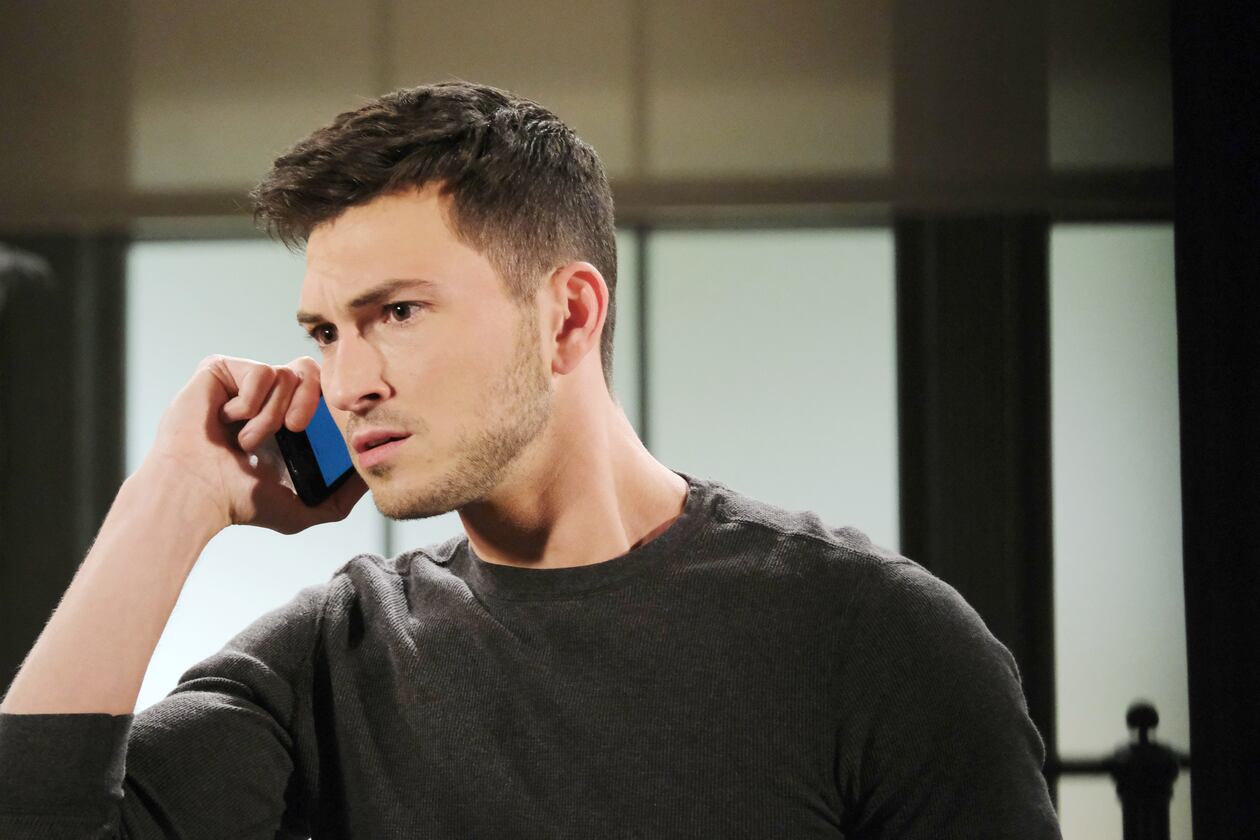 On today’s full episode recap of Days of our Lives, Allie feels terrible about accusing Tripp of rape, Nicole makes Ava an offer that shocks Rafe, and Claire runs into Charlie.

At the hospital, when Nicole offers Ava to stay at Rafe’s house, Rafe asks her into the hall and questions why she offered his house. Nicole thinks she’d be safe with him from Charlie. It wouldn’t be forever. She reminds him he terrorized her and she’s still having flashbacks and hallucinations. Rafe reminds Nicole of some of Ava’s nastier deeds. “Kidnapping, blackmail, making planes fall out of the sky,” he says. Nicole thinks Ava has changed. Rafe says the extra bedroom is Duke’s (the plush toy) room. Nicole laughs. Rafe starts to crack. She keeps up the pressure and Rafe reminds her that Ava’s a mob boss who has loads of minions who can guard her body. Still, he’s closer to saying yes, when Nic reveals she’s trying to get Ava away from her mob family.

Claire finds Charlie at the park and she learns that the DA dropped all charges against him. Claire is astounded when he lies that he slept with Allie, but didn’t rape her. Claire’s disgusted and calls him a liar, but he insists he’s not. Charlie lies that Allie called him over. “I guess she decided that she liked me better.” He knew she was wasted but went over to her apartment. “And assaulted her,” Claire whispers. Charlie says Allie came on to him. “It was her fault,” he says, calling it a one-night-stand. He couldn’t tell her before. He tells Claire he’s head over heels in love with her. He asks her to tell him she loves him, too. Claire tears up. She calls him disgusting and says she’ll never believe him. Allie remembered what happened to her that night. Charlie snaps and grabs Claire and she tries to break free.

Allie and Marlena discuss her food poisoning, and Marlena’s sad she didn’t get to officiate at Steve and Kayla’s wedding. Allie tells her gran that she apologized to Tripp for accusing him of rape. She feels terrible for everything. Marlena thinks Tripp will forgive her in time. Marlena asks how she’s been doing. Allie hasn’t been sleeping. She keeps thinking of Charlie holding her down and raping her. It’s powerful and she fears it’ll never go away. Marlena says she’ll never forget, but the memories will fade in time. Marlena is impressed with the proof of her healing already, by her wonderful mothering of Henry. Allie thought Henry would be a reminder of what happened to her at first but now, she just sees the little boy she loves.

Lucas runs into Tripp. He apologizes for accusing Tripp of raping his daughter. Tripp admits it hurt but he understands. When Lucas tells him that Charlie’s free and that the British police aren’t going to press charges, both men become outraged.

Ben receives a call from a wrong number and picks up. “Ciara?” Ciara says, “Ben? It’s me. It’s Ciara. Oh my God, I can’t believe I finally got through to you.” She cries as Ben keeps asking if he can hear her. The connection is bad and Ben can’t hear anything but static. Rhodes returns and tells Ciara to hang up the phone. Rhodes finally lets himself into the cage and grabs the phone. Ciara yells, “Ben, I love you!” Ben yells, “Ciara?!” They’re disconnected and Ben runs off. Meanwhile, Rhodes has taken his phone and tells Ciara he thought she was done with her tricks. He’s angry. She asks if he’s angry enough to kill her.

Tripp arrives at the hospital to visit his mother. Ava tells him about Charlie’s lies and that he’s looking forward to taking his girlfriend out for Valentine’s Day. He’s even looking forward to getting back to work! Tripp calls him delusional. Ava reveals he threatened to kill her. Ava’s not worried but Tripp reminds her he already put her in the hospital once.

Lucas arrives at Marlena’s townhouse. They discuss Lucas’ apology to Tripp. Marlena and Allie are rocked when Lucas reveals that Charlie called it consensual. Allie and Marlena are horrified that the authorities in London aren’t proceeding with the case due to a lack of evidence.

Ben catches Charlie in the park manhandling Claire. Ben tears them apart and Claire says she doesn’t love Charlie. He’s nothing to her. She runs away and Ben threatens that if he goes near her again, he’ll be sorry. He leaves and is comforting toward Claire by the pub. Ben tells her Ciara called him. He details the call.

On a walk with Henry, Lucas and Allie run into Charlie in the square. Allie flashes to him raping her. He asks if that’s his son and Lucas realizes who he is. “Man, I’m gonna kill you,” he says, launching himself at the rapist. Allie stops him.

Rhodes goes to Statesville and tells Vincent they need to talk, but when Vincent turns around, it’s Orpheus!

On the next full episode of Days of our Lives, Orpheus is back.