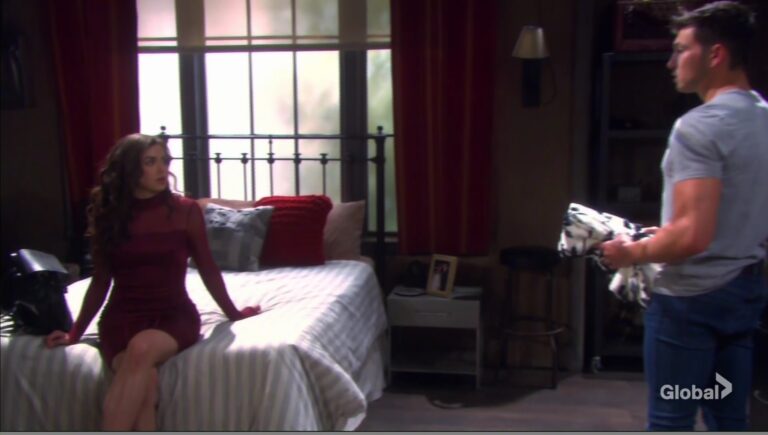 In the Thursday, July 1, 2021, full episode recap of Days of our Lives,  Gwen and Xander get close, Chanel finds a new place to live, and Ciara turns up while at the lake, a dead body is discovered. In case you missed out, on Wednesday’s Days of our Lives episode, Chloe chose Philip over Brady.

At his place, Tripp gets suited up for the lake. Allie says Chanel’s not coming. She used to make her carry all her stuff. “And now, you get to do the honors.” She hands him her beach bag.

Gwen wakes Xander up with a glass of water tossed on his face. She hasn’t been able to sleep. He complains that he was sleeping like a baby. She demands to know what he did with Snyder’s body. He doesn’t tell her and admits Doug rented a steam cleaner for the sofa. Gwen gets the conversation back to Snyder. What if someone finds his body? Xander tells her it’s over. She’s free and he’ll never threaten her again. Later, they eat crappy storebought donuts. Xander says they have to eat them all or face “that shrew” Julie, who will gloat that hers are superior. Gwen can’t finish and guesses hers are superior. Xander stares at Gwen and asks why she’s so guilty. Is it to do with her blackmail? He asks her to spill it. She asks why she should trust him. He says he’s charming and fun. She tells him he’s a reprobate. He reminds her they moved a dead body together. She asks him to swear to keep it to himself. It’ll ruin things for her and Jack if he doesn’t. Xander swears that her secret is safe with him. Gwen reveals that she miscarried before she fell down the stairs. She tells Xandy she went to tell Chad but ran into Abigail and reveals the fight they had, that she didn’t have a chance to tell her the truth. She shares the whole story and that she wanted to hurt Abigail. That Snyder found out and blackmailed to tell Jack if she didn’t become a drug mule. Xander hates that she’s deceiving Jack but understands why. She wants a real relationship with her father. He can relate. Gwen says Jack mentioned his family hasn’t welcomed him with open arms. Xander tried to prove himself worthy but he gets no acceptance, respect or love. It hurts. A lot. Xander doesn’t love what she did to Abigail, but her secret is safe. She hugs him in thanks and then backs up and apologizes.

Ben dreams that Ciara’s back and wants to be with him. She remembers everything! He happily holds her close and then wakes up yelling and a knock comes on the door. He gets the door and Claire, who looks ready to go swimming, asks Ben to come with her, Tripp and Allie to the lake since it’s July 4.

At Eli’s, he loses his towel once again at home and Chanel gets an eyeful. He rants that she didn’t hear the smoke alarm and now the place smells like smoke. He asks what the cake she was making is for and she tells him it’s for his anniversary with Lani. He tells her they can’t tell Lani about this. Lani walks in and questions them. They try lying and then Chanel admits, “I’m sorry cousin, but I saw Eli naked again.” Chanel says she has excellent timing. Lani loves her but she needs to find a new place to live.  She knows. She’ll leave once her bakery is open. She’s grateful to them for putting up with her drama. Lani goes to care for the crying babies and Chanel says she’ll get her things together and head to her mom’s to complete the cake. “No more headphones on while I’m cooking,” she says. She goes and later, Eli dresses and Lani says she’s not angry about Chanel. “I know that you and all of your Sweet Bits are mine,” she says. They’re looking forward to a quiet night of celebration.

At her condo, Paulina admits to Abe she was married to her work and hasn’t been involved with a man for ages. Abe thinks she didn’t meet the right man in Miami because the right man was right here in Salem. She asks him to bring her around to his way of thinking so he kisses her gently. He talks up her good deeds with her new project and she cringes. Abe goes to shower and Paulina calls someone to demo the Horton Square today. Chanel walks in and asks what’s happening with the project in the square. Paulina covers. She is starting renovations after the holiday. Abe appears, dressed and Chanel learns he spent the night. He takes off. Chanel’s weirded out about her mama hooking up with her ex’s dad. She asks to crash there. Paulina agrees to it. Later, she apologizes for not being kind about her dating Abe. She’s glad for her mom. Paulina thinks her father is smiling down from heaven proudly on Chanel. They embrace.

At the lake, Allie and Claire race to the dock to swim and Ben asks what’s going on between him and Allie. Tripp says they’re taking it slow. He asks about Ben and Claire and Ben calls them friends. He’ll never stop fighting to get Ciara back. Allie and Claire run back to the men. “There’s a body in the lake!” They yell. The men drag him out and realize it’s Dr. Clay Snyder. Eli turns up and Tripp shares what happened and that he didn’t like the guy. They ponder what happened. Eli questions Tripp who reveals that there was an issue with the opioid count being off at the hospital. He spoke to his aunt Kayla about it. He also reveals there was tension with Gwen and Snyder.

Abe arrives at Lani’s with flowers for her anniversary. He talks about going to the fireworks later with Paulina. He likes her. He’s impressed by Paulina’s drive and work ethic and notes that she hasn’t been involved with anyone for a long time. Lani recalls Paulina telling her otherwise. She tells her dad she thinks Paulina’s hiding something.

Back at Alice’s, Xander and Gwen share a close moment and almost kiss when Eli comes to the door and tells Gwen that her doctor is dead. She says it’s awful but asks what it has to do with her.

Ben returns home. He’s sorry Claire had to see the dead body. She feels fine. He invites her in to watch the hot dog eating contest on TV. She laughs. It sounds fun and gross but needs to go. Ben goes inside and sees Ciara sitting on his bed.