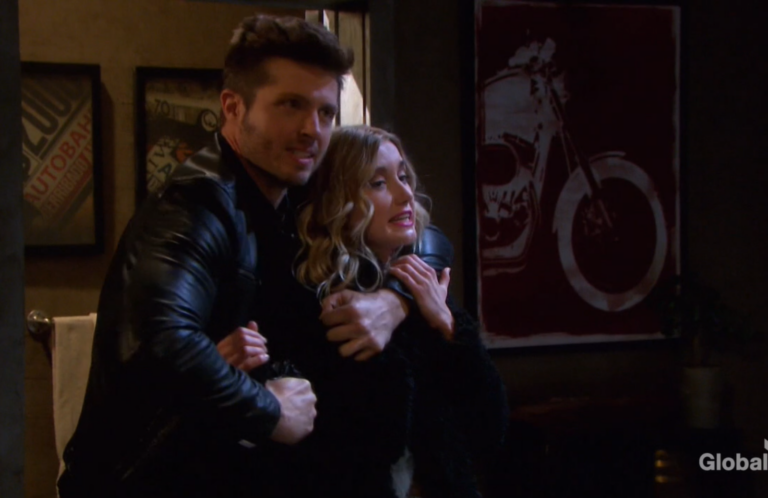 Thursday, March 11, 2020: On today’s full episode recap of Days of our Lives, Ciara is in trouble, Sarah sees Kristen, and Jack is Xander’s best man.

Xander goes into Sarah’s room at the mansion. They flirt and talk about their upcoming wedding and marriage. Sarah’s phone beeps and he asks her to leave it be as he kisses her.

At Basic Black, Chloe finishes sending Sarah’s text, telling her she’s about to pick up her wedding dress. Kristen as Susan walks in and hands Chloe flowers, surprising Chloe. “That’s what you do when you tell someone you’re sorry.” “Susan” thinks she should care for Brady since it’s her fault Brady got shot. She didn’t get the warning until it was too late. She let everyone down and blamed Chloe. She asks for forgiveness. Chloe says of course she can and “Susan” hugs her and fantasizes she’s stabbing her. She tells Chloe that her psychic sight is telling her Chloe’s falling for Brady. “Susan” thinks she’s better for him than that “mean, mean, mean Kristen DiMera.” Does Chloe agree? Chloe refuses to go there. “She’s Brady’s love.” “Susan” asks why she turned down Philip for a date. Chloe’s surprised she knows. “Susan” says Philip really cares for her and he thinks she cares for Brady. Chloe admits she has had thoughts. Kristen looks at the letter opener. Brady calls and invites Chloe to dinner and “Susan” squirms. Chloe disconnects the call which was on speaker, and wonders if this is a sign. She leaves and “Susan” smashes the flowers in anger and calls Chloe a “conniving slut.” She’ll kill Chloe before she can take Brady away.

Ciara’s upset wondering how she’ll warn Ben that Evan’s gunning for him. She tries to use her psychic connection to tell Ben he’s in danger and why. She somehow twists off the gas pipe in her room and then seems shocked by what she’s done.

At SPD, Shawn and Ben wonder why Evan’s by the docks, where Ben lives. Ben hears Ciara’s voice, telling him he’s in danger. Ben tells Shawn this. Shawn assumes he’s under a lot of stress. Ben insists he heard her. They take off.

In Ben’s room, Evan tells Claire he’s going to kill Ben. Claire begs him to let her go. She won’t tell anyone she saw him. Evan accuses her of lying. “Say goodnight, Claire,” he tells her, bringing the gun to her face. Evan tells her he’s holding Ciara hostage. Claire says she’s in a room with glass walls. Evan’s shocked she knows. She tells him about Ben’s psychic connection with Ciara. Evan says it doesn’t matter. He’s going to take care of Ben tonight. He reluctantly tells her when she asks, how Ciara came to be kidnapped and that Orpheus wanted to use her as his ticket out of prison. Claire offers to call her grandfather for Evan. He could have millions. They argue and he grabs her as Shawn and Ben rush inside. Evan tells him to hand over the gun or lose his daughter. Shawn kicks the gun under the bed and Evan laughs. Shawn races at him and goes for the gun. They struggle and there’s a gunshot. Shawn’s shot. Ben grabs Evan’s gun and Shawn grabs his own and begs Ben to wait for backup. Ben takes Evan and they head to find Ciara, while Claire calls 911.

Back in Sarah’s room, Sarah tells Xander he has to go. Her dress is on the way over. She doesn’t want to jinx anything and asks him to go back to Salem Inn. She’ll see him tomorrow. “You’re having a bachelorette party. Male strippers.” She nods and then denies it. They need a maid of honor and a best man. They kiss. He goes and Justin and Bonnie appear. Sarah’s wrapping a new sporran for his kilt. “It’s a pouch, actually.” Bonnie finds kilts sexy. Sarah grins and agrees. Justin will be officiating and asks what Sarah needs. Sarah says her sister can’t be there to be her maid of honor and so Bonnie offers. Sarah’s thrilled. Bon Bon goes to get them all drinks and the three of them drink to the wedding. Bonnie brings up her marriage to Rex but Sarah doesn’t want to talk about that.

Xander finds Jack at home reading. He asks if Jack has plans tomorrow. Just work. Xander wants him to take the day off. He’s marrying Sarah and wants Jack to be there. He actually wants him to be his best man. Jack isn’t sure why. They don’t know each other well. He recalls Xandy sold him to Eve Donovan. After some thought, Jack says he’ll do it. Xander picks him up in a big hug. They learn that Bonnie’s the maid of honor. Jack asks what he should wear. Xander says it doesn’t matter. Nobody will notice him while he’s in his kilt. Xander’s ready to go on a pub crawl.

Back in her cage, Ciara has ripped the pipe open and a gas leak starts. She tries to get out of the room by hitting the glass. Ciara hears the gunshot in her head and yells, “Ben!” She continues to hit the window and the pipe hits the bed and sparks start to go off. Ben and Evan arrive.

Chloe goes into the pub when Sarah calls and cringes. Her dress is in her office and she forgot to bring it. She’s sorry. Sarah offers to go get it. Chloe tells her how to get in and they disconnect. Sarah has to get the dress and apologizes to Bonnie and Xander. She brings the gift with her. She’ll drop it off to Xander after. Later, Brady shows up, and he and Chloe drink. She tells him Susan brought her flowers. “Stink weed? Poison Ivy?” Chloe laughs and tells him what happened between her and Susan, how she helped her to recognize she wasn’t admitting something to herself.

Back at Basic Black, Kristen as Susan rants about how Chloe is after her man. She pulls off the wig before Sarah arrives. Sarah’s in shock.

Join in the conversation with a comment or two and feel free to like and follow Soaps Spoilers on Facebook and Twitter. Take a peek at this week’s daily photo spoilers in our gallery below, and let us know what you’re looking forward to most!