Home » Days of our Lives » Days Recaps » Chad Convinces Abigail to Come Home, While EJ Lays a Beating on Xander

Chad Convinces Abigail to Come Home, While EJ Lays a Beating on Xander 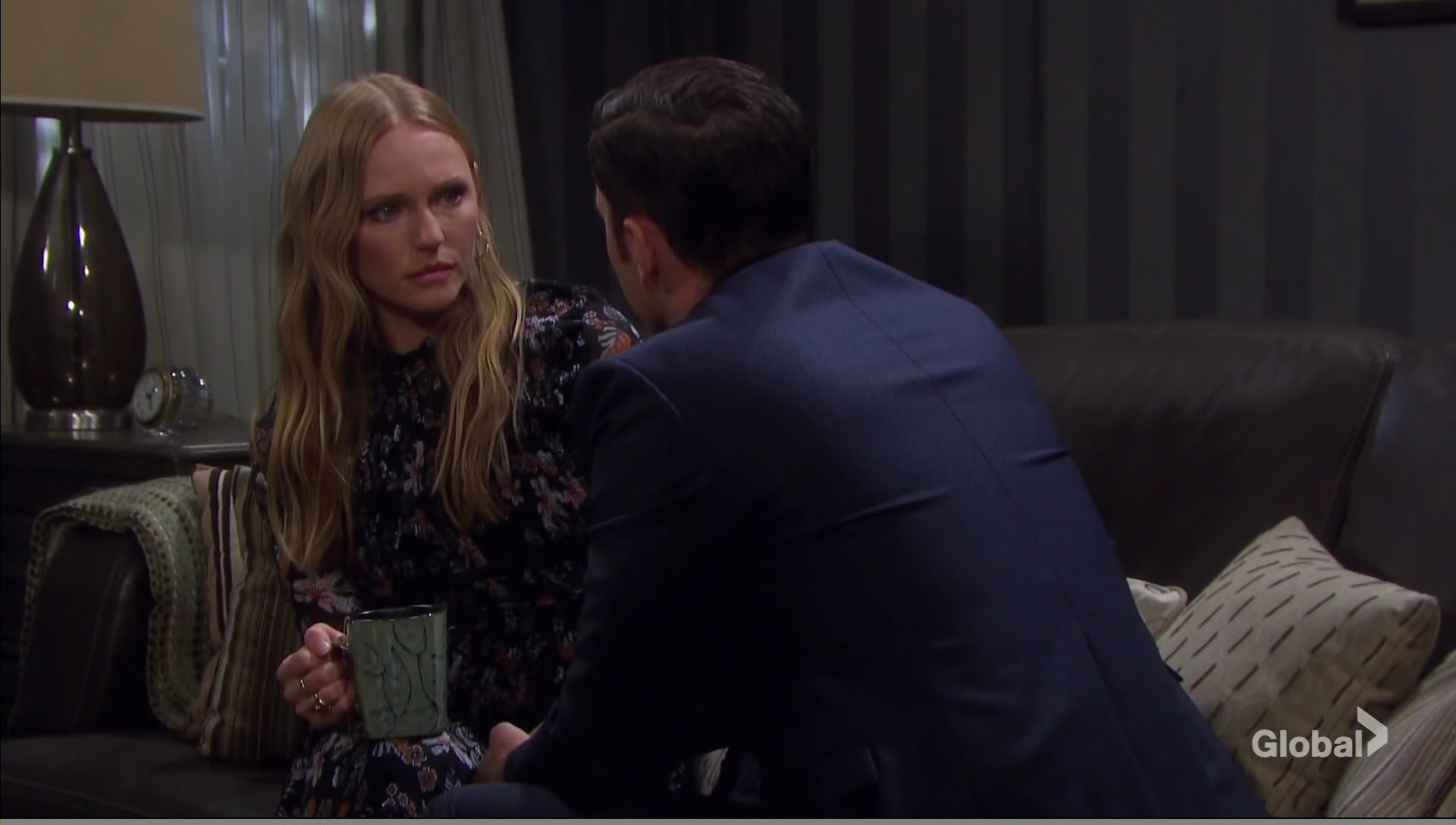 In the Monday, September 13, 2021, full episode recap of Days of our Lives, Kayla runs tests on Doug for his memory issues, EJ and Xander fight, and Gwen lies to Jack again. If you missed out, Soaps Spoilers has you covered with Friday’s Days recap: Allie admitted to her jealousy.

At Alice’s, Gwen admits to Jack that she’s ashamed of the reason behind Snyder’s blackmail. She thought her father would disown her and says she can’t keep it from him any longer. She reveals that Snyder knew that Abigail didn’t cause her miscarriage. He asks why she lied. She explains her jealousy over Abigail and that Xander was covering for her. “He did it for you.” He didn’t want Jack to know that his oldest daughter ruined his youngest daughter’s life. Gwen feels a tremendous weight lifted. Jack jumps up and screams at her to pack her things and get out. “Dad, please?” Jack yells, “You are no daughter of mine!” She comes out of her fantasy and Jack prods her to tell him about her and Snyder. She can’t do it and uses Xander’s lie. “I used to be a prostitute.” She lies about making contacts and offering her services. Snyder was a client and was in Philidelphia “on a conference or something,” she says. He recalls that Snyder was in her room the night she miscarried. Gwen asks for forgiveness. Jack’s upset with himself. She wouldn’t have felt forced to hook if he had known her. She did what she did to survive. Gwen tears up. “You’re not ashamed of me.” He cries. He’s done a lot of things he’s ashamed of and if he judged her harshly, he’d be a hypocrite. He tells her about his father, Harper, who hunted and killed sex workers. Gwen can see his life hasn’t been easy. He’s grateful he met Jennifer and glad Gwen got out of that work before she encountered a psychopath like him. They hug and he leaves the room to take a call from Jennifer. Once he’s gone, Gwen calls herself a “bloody coward.” She couldn’t let her father hate her. “I couldn’t lose him.”

In Xander’s room, EJ gets on a call with the judge. While he waits, Xander reminds EJ that he cared for him in Nashville. “I wiped the drool off your face. You were helpless as a baby.” He snatches EJ’s phone and disconnects and says, “My little Elvis.” EJ demands his phone. “What are you going to do if I don’t?” Xander provokes. EJ will get another phone. Xander tosses the phone on his bed and says this wasn’t his fault. He warns EJ and then belts him one. Xander goes flying and gets up and grins wildly, accepting the challenge. He punches EJ and they go back and forth brawling. Xander and EJ are a little bloodied and disheveled. EJ finally beats Xander to the floor and limps out, laughing. Xander finally hauls himself up on his bed and can barely breathe. He talks about having the last laugh and calls EJ a son-of-a-bitch.

Kayla gossips about what happened at Justin and Bonnie’s wedding to Marlena, who is stunned that Bonnie would steal a million dollars. When Kay gets a text, she lets Doc know that Doug’s appointment to be tested for memory issues has been canceled. Marlena considers that he might be fine. Johnny arrives and hugs Kayla before she goes. He kisses Marlena and says he’s sorry he hasn’t seen her before now. She’s having problems with Allie, he admits and wanted to talk to her in private. He’ll get it that but first thanks his grandma for helping his twin get through her rape. “We’re so lucky to have you for a —” Marlena interrupts. What is he buttering her up for? He admits he wants her to help finance his film project. He thought about writing about someone who inspires him like Mat Fraiser or Gret Thunberg. Marlena suggests he call his brother Will who spent time in Hollywood. Johnny recalls moving to Hollywood for Will to make the movie on Sami’s life. He wonders if Will would let him read the script. Marlena agrees to talk to John about financing. She advises him to save the charm for Hollywood because he’ll need it. She talks about making an elevator pitch. “What’s that?” he asks. She whispers, “Look it up.” They embrace and he goes.

At the square, Doug asks Julie who the heck Alice is. Julie says, “Alice Horton, my grandmother.” He suggests Julie take a box of donuts to her and find out her recipe. Julie takes him to the plaque and asks if he remembers them. “Of course I do,” he says, knowing the square is dedicated to their memory. Julie worries he read the plaque and really doesn’t remember Alice. He admits he has the feeling that Alice and Tom are fine people but he doesn’t know either one of them. Julie looks worried and Doug asks, “Why can’t I remember them? What’s wrong with me?” Julie isn’t sure but they’ll find out and fix it. She kisses his hand.

Abigail and Chad greet each other awkwardly in Boston. He asks if he can hug her and she doesn’t make a move toward him. When she finally hugs him, it’s uncomfortable. He asks her to come home with him. She needs more time. He begs her to at least talk to him. They get some tea and she says while cleaning up, she found little kid clothing and they wondered why she kept them. It hit her that Gwen’s daughter was her niece and would have been Chad’s daughter and their kids’ half-sister. “I thought I was getting past it but I can’t get over that I killed that child.” Chad denies that’s what happened and reminds her she’s an excellent mother, even from miles away. She’s grateful he says that but can’t help think that Gwen probably loved her baby too and she wanted it to disappear. They talk it out and again, he asks her to come home but she can’t. She’s having a hard time trusting him. He wants to help her do that. “However long it takes.” He’s devoted from now on to making her happy. She gives a half-smile and she tells her she’s the most important person to him. “I’m nothing without you.” He again asks her to come home. She finally says yes.

At the hospital, Doug and Julie find Kayla. She examines him and Julie explains all the confusion Doug’s been having. Doug asks if he has Alzheimer’s. Kayla says there are a lot of reasons why he is having memory issues. She’ll do a lot of tests and they’ll figure out the next steps together.

Johnny finds his dad at home, drinking. He takes in the way is father looks. “You should see the other guy,” EJ says. Johnny lets his dad know that he got his financing and is doing The Sami Brady Story. EJ laughs. Not all characters get their happy ending.