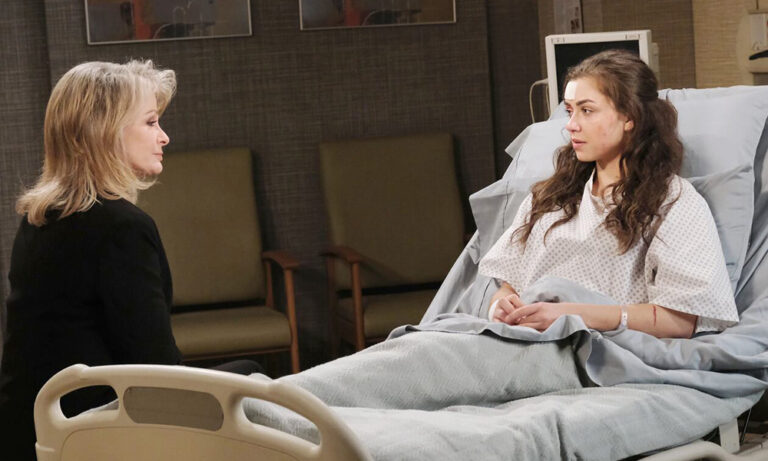 Monday, March 29, 2020: On today’s full episode recap of Days of our Lives, Brady has an awkward visit with “Kristen,” Ben asks for Marlena’s help, and Ciara flirts with Theo.

Theo and Ciara hang out on her bed at the hospital. She whines about wanting ice cream and flirts with Theo, and then mopes. She can’t believe she married a serial killer. She looks at their photo together and comments on how happy she looked. “He’s a literal psychopath.” She thinks there was something seriously wrong with her if she really married him. Why didn’t Theo stop her? He reminds her that nobody tells her what to do. He asks her to forgive Claire. Ciara knows she’s missing a huge chunk of time but she still hates Claire. Ciara doesn’t like that he always defends Claire. Ciara asks if everyone was fine with her marrying the Necktie Killer. “Not at first,” Theo admits. They tried to talk her out of it. Meanwhile, in Marlena’s office, Ben asks Doc for help in getting Ciara to remember him. She says they need to give it time. The amnesia may be temporary. He asks to give her Rolf’s serum. She tells him that it could be dangerous. Ben relents. He’s upset that Ciara wants her gone. Marlena wishes she could do something about it. Ben asks her to hypnotize her. Marlena stammers, “I don’t know.” With convincing, she finally agrees to ask. She goes to see Ciara, who is snuggling with Theo in bed watching cartoons. Theo goes and Marlena is glad to see her alive and well. Ciara admits she’s not well so Marlena offers to help get her memory back. Out in the hall, Ben finds Theo and asks how Ciara is. Theo says she’s tough but hasn’t remembered anything.

At the DiMera mansion, Gabi fixes Philip’s wound from the punch in the face Xander gave him when Kate and Jake appear. Kate notices blood on Philip’s shirt which lays over a sofa and asks what Gabi did to him. Philip shares that Xander punched him. Kate makes snide comments about Gabi giving her son a lap dance. Gabi rolls her eyes and invites them to dinner. Kate tries to get out of it. She and Philip leave the room and Jake asks if Philip’s who Gabi is moving on with. Gabi asks if he’s jealous. Jake goes on about how in this war of theirs, he and Kate will have the last laugh. Later, the foursome drinks wine and toast to the war between Gabi Chic and Basic Black.

At Marlena’s townhouse, “Susan” is upset to hear from Chloe that Brady’s visiting Kristen at the prison and sends Chloe into the kitchen to help John cook and calls Vivian on her cell phone. Vivian’s reading in bed when she takes Kristen’s call and snaps, “What?” Kristen needs her help keeping Brady away from Susan. Vivian reminds her she hasn’t broken up Kate and Jake yet. Kristen swears she will.

Brady walks in on Susan in the Kristen disguise saying, “You are not the boss of me Miss Kristen DiMera,” in her own voice. She asks why he’s there. “I’m here to see you,” he says. She toys with her hair and he asks if she’s okay. She says it’s been a long time since he’s visited. He apologizes and blames it on recuperating and talks about her visiting privileges being taken away. She blames Chloe but Brady reminds her she stabbed Victor and busted out of prison. “Kristen” calls him protective of Chloe and says she knows for a fact that Chloe has romantic feelings for him.

Back at Marlena’s, Chloe appears with dinner just as Kristen’s saying goodbye to Vivian on the phone. Chloe hears her say, “Susan needs to play her part.” “Susan” lies that she and Roger were roleplaying. Chloe’s heard enough and tries to run off. “Susan” begs her to stay and talk about Brady. Chloe admits she didn’t tell him about her feelings. The timing was inappropriate today. She bashes Kristen as she talks about her thoughts on being with Brady and Kristen clutches a knife in her hands in anger. Chloe asks for the knife to get a piece of cheese. “Susan” hands it over and Chloe thanks her for listening. When “Susan” says she smells something burning, Chloe runs to the kitchen to help John again.

Back at Statesville, Brady doesn’t want to discuss Chloe. He sees her license plate and asks who The King is. Vivian interrupts and Brady tries to get rid of her. Vivian tells Brady that Kristen made the plate for him because he’s the king of her heart. It’s awkward and Brady thanks “Kristen” but asks Vivian to leave. Vivian says Kristen has a shift to take over for her and tells her that Kristen doesn’t want him to visit for a while. “Kristen” agrees. She needs to focus on her penance. Brady refuses. Vivian offers to be the one Kristen can lean on. Brady reminds Vivian that they hate each other. Vivi denies that and Kristen tells Brady she needs to focus on herself right now to get stronger for him and Rachel. He says fine, he’ll give her time and will visit in a couple of weeks. Kristen says, “In a little bit.” He goes to take the plate and she grabs it. She wants to keep it to remind her he’s the ruler of her heart. They profess their love and he goes. Susan’s glad Vivian’s being a friend to her and later Vivian mutters that Kristen better break up her son and Kate.

Brady arrives to Marlena’s place and finds “Susan” talking to herself about Brady finding out her secret.