Home » Days of our Lives » Days Recaps » Beyond Salem: The Finale Reveals Twists as the Mystery of the Stolen Peacock is Revealed

Beyond Salem: The Finale Reveals Twists as the Mystery of the Stolen Peacock is Revealed 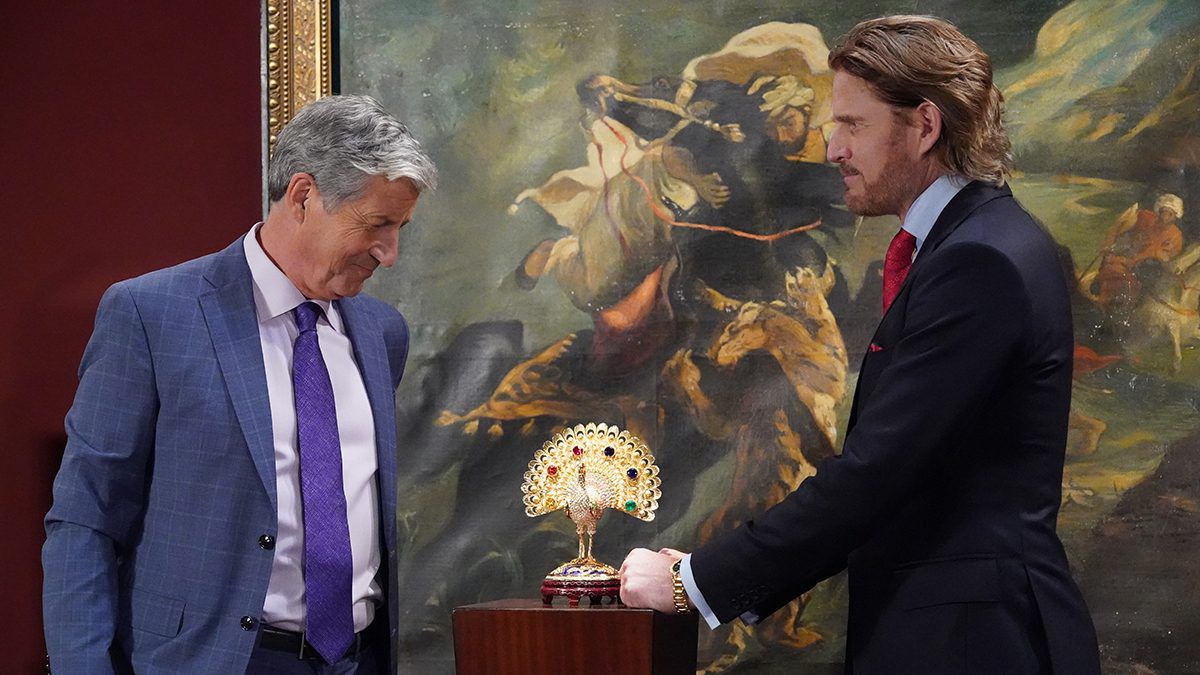 Friday, September 10, 2021, fifth and final episode recap of Days of our Lives: Beyond Salem. In this episode, there are twists, turns as the show is wrapped up. Soaps Spoilers has all of the recaps for Beyond Salem, which showcases plenty of adventure, excitement, romance, and danger with Salemites involved in the mystery of the stolen peacock, which is finally revealed.

A knock comes to Ben and Ciara’s door. Shane calls out, “ISA!” Ciara opens the door and introductions are made. “You are Paige’s grandfather.” He’s uneasy and tells him he’s Ben Weston. He was responsible for Paige’s death. Ciara tells him he isn’t that person anymore. He wasn’t in his right mind. Shane made peace with that a long time ago. He needs the brooch. He wonders if they’re worth the pain they’ve caused. Ben and Ciara wake up. He’s deep in thought. He thought Paige’s death would be harder on him. Considering what Ben did, he expected a bigger reaction. Someone arrives. It’s Shane, who points a gun at Ben. He and Ciara are confused. Shane feels dizzy and almost falls. Someone hit him over the head. He asks them if they got the amethyst. Ben says they gave it to him last night. Shane’s confused. He wasn’t there last night. Drew was. Ben asks who Drew is.

Phoenix, Arizona, The Next Morning

Will and Sonny sit on the sofa and Will has to file a story before Ronan Farrow scoops him. They see the news that Austin was arrested. Sonny needs to call Grandma Kate. Maybe he should let Chad break it to her. Sonny thinks he’s asleep. In Chad’s room, he snuggles up to “Abby,” and Leo says, “How did you know I liked being the little spoon? Goodmorning, Bae.” Chad falls off the bed in shock and Leo tells him they had a night of passion and he proposed. “Move over Abigail. I’m the new Mrs. Dimera,” he says. Later, Chad’s half-dressed when he races into the living room, freaking out as Leo follows and tells him that they made passionate love last night. Nobody except Chad believes him. Leo thought that bi-curious Chad would be more understanding considering his best friends are “Bert and Ernie.” Will looks at security footage from last night which shows them going into separate bedrooms. Leo snuck into Chad’s bedroom ten minutes ago. Chad screams, calming down as Will pats him on the back. “Fine,” Leo says. “I still say it was the best ten minutes of your life.” He knows they all had fun last night and that Chad felt empowered as Bolinda Chinashop. He gripes that Will and Sonny were in a rut like an old married couple. “I was just trying to unstick you.” Sonny aruges that he’s not that selfless. Leo says maybe he was trying to be friends. They roll their eyes. “Fine,” he says. “I’ll just go pack.”

At the police station, Billie paces and Kyle criticizes her impractical shoes. She’s worried about her brother. Kyle says they need to face that her brother is guilty. In an interrogation room, Austin tells Carrie he didn’t do this. In the apartment, Anna makes a call and snipes that her son-in-law better is released. She disconnects and hates that Tony’s being calm. Marlena and John walk in. Anna yells at John for turning Austin in. Everyone else says they couldn’t have turned the other way but Anna knows Austin. He’d never be a part of a jewel theft ring. Back at the police station, Kyle kisses Billie goodbye after she asks him to go talk to Anna. Billie goes to talk to her brother. She knows he didn’t do this. They talk about Kyle and how hot he is until Austin reminds them he’s there in cuffs. Billie promises he doesn’t need to worry. It’ll be okay. “Shane” turns up at Austin’s and Anna snipes that Austin’s not a thief. “Sometimes people just aren’t who they appear to be.” Kyle shows up with the sapphire, citrine and ruby. “Shane” has the rest. They should get them back to Alamainia. He rushes Kyle out the door, saying it was wonderful seeing them all before. They go.

Eli and Lani want to go deep-sea fishing but Paulina’s worried her friend will find her and make her pay for losing that ring. Abe appears. The orange diamond is one of the missing gems. Paulina’s upset. Lani suggests that her friend Michelle won’t be so upset. A jet ski is heard and Paulina breaks out her binoculars, thinking Rosie O’Donnel moved back. Instead, she sees her friend Michelle. “She’s coming straight for us!” A few moments later, Paulina answers the door to Michelle. Eli and Lani are surprised she’s not Michelle Obama. Introductions are made. “This is Michelle White and her husband is Dr. Ronald White.” He’s the most prominent plastic surgeon in Miami. Michelle apologizes that Paulina ended up with a stolen gem. She had no idea. “You could have been killed.” Later, Abe professes his love for Paulina, and she calls him the most wonderful, caring man. They kiss and hug before Lani and Eli appear, bags packed. Paulina frets that they may not have everything and wants to ensure they don’t forget anything. Lani comments that she reminds him of her mom.

Shane calls John, who is surprised to hear from him since he just left. Shane groans. He wasn’t there. His twin brother Drew Donovan was. Ciara calls to the front desk and gets a car to take him to the airport and Ben tries to apologize for murdering Paige but Shane doesn’t want to hear it. She was innocent. Ciara stops Shane from saying how he feels and he takes off. Later, Ben reads Will’s article in the news and thinks Ronan Farrow can eat his heart out. They discuss Ben’s past and he can only try to be better and help when he can. They profess their love and kiss.

Billie arrives at Austin’s. She learns that Shane’s brother stole the gems.

Lord Sebastian Alamain points out all of the gems that are put back into the peacock. He asks Director Donovan how he can repay him. “Shane” (Drew) will think of something. John barges in with Billie, guns drawn. John asks Kimberly’s birth date and Drew has no idea. He realizes he’s busted. He loosens his tie and grabs Kyle and pulls a gun on him. Marlena appears. They discuss Camila’s death and John says Kyle isn’t who he claims to be. Everyone’s confused and “Kyle” grabs Drew’s gun and with a Russian accent says, “I’m Dimitri von Leuschner.” He’s Carly Manning’s cousin. He’s been in on it all along. The Alamainian Peacock belongs to the House of von Leuschner and was part of  Katerina’s (Carly) dowry and presented at Lawrence (Alamain) and Katarina’s wedding — the one that never happened. The Alamian’s never returned it. Lord Sebastian asks why they would give it back. Eventually, Katerina did marry him and then killed him. Dimitri doesn’t care. He joined the ISA just to get the peacock back, but John says the peacock is going back to the ISA. Drew says no, it isn’t. He pulls out an app with a peacock on it and a red button. The peacock isn’t just a bauble. It can activate satellites under deadly lasers that can cause mass casualties around the world Phoenix, Zurich, New Orleans, Johannesburg, Miami and their beloved Salem. Drew says once he activates it, the great economies will come begging to ask what they can pay him to stop the lasers from taking out other cities. He activates it and nothing happens. A fight breaks out and Marlena holds a gun to Drew as Billie kicks Dimitri between the legs.

Austin is released and her and Carrie arrive at home. They discuss Drew taking Shane’s place. As they discuss it, they realize Drew had an accomplice.

Leo returns from packing and apologizes. Chad appears, yelling that Leo stole his watch. Will checks his pocket and Leo enjoys it far too much. Will finds the emerald. Sonny thought Shane took it but Leo swapped it with a duplicate. “Do you think anyone will notice?” Later, Sonny thinks he and Will should go out more. Chad wants to be included, but he’s not sure he’ll be in heels anytime soon. Being with them made him realize how much he missed them. Will wants to make a bros weekend happen. They embrace.

Billie and Shane are with Lord Sebastian. She feels used. Sebastian invites her to dinner. She asks Shane. They need to submit a briefing to headquarters and need to give a detailed history of the peacock. Sebastian can help with that. Shane tells Billie her assignment is to have dinner with “this guy.”

Austin tells everyone Billie texted. The ISA dropped charges against him. John’s there and they talk about the excitement being over. Marlena thinks it’s time to say goodbye. John takes photos of everyone and they pack, ready to return to Salem.