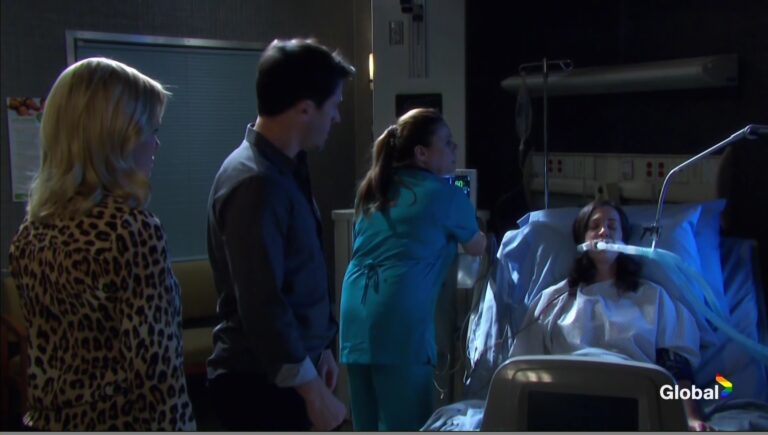 In the Wednesday, June 16, 2021, full episode recap of Days of our Lives, Belle takes care of business, Chloe goes home, and Paulina meets Allie and Abe. In case you missed out, on Tuesday’s Days of our Lives episode, Marlena walked in on Sami kissing Lucas.

From the hospital, Steve calls Justin to put their dinner off, but Kayla walks into her office and says that they’re still on. Justin’s upset, knowing Steve wanted to cancel because he doesn’t want to get to know Bonnie together. Bonnie eavesdrops, looking hurt. Kayla grabs the phone and assures Justin they’ll be there. Once they disconnect, Kayla admonishes her husband who doesn’t want to be friendly to someone who made a mess of Bonnie’s life. In Jan’s room, Belle recaps everything Jan has done to her while the woman’s comatose. Later, Philip wheels Chloe out. She’s grateful to him for letting her stay with him. Shawn stops them. Belle’s with Jan. She wants to ensure Jan can’t hurt anyone ever again. Belle pulls the plug. When Shawn walks in, Jan’s monitors are going crazy. He fixes the ventilator and calls the nurse. Chloe and Philip arrive as the nurse tells them Jan seems fine. The nurse leaves and Philip cheers Belle for what she’s done. Belle admits she only wanted to test the woman. Shawn clarifies that Kyle tested Jan. “This is a coma, and it’s real.” Belle fights tears. She was trying to protect everyone and lost control. Shawn says Jan won’t hurt them again. Chloe tells her that she and Claire will testify against her for murder if she wakes up. Belle’s sorry for what happened to Chloe. They hug. Shawn wants to take her home to celebrate. They leave and Jan’s pinky finger moves a few times.

Roman finds Abe deep in thought at the square. He tells his friend he’s thinking about Paulina Price. She’s spearheading the transformation of the square and thinks they need more women, people of color, and LGBTQ-owned businesses. Abe calls her passion infectious. “She’s also very funny, and charismatic.” Roman thinks he sounds smitten. Abe’s not sure he wants to mix business and pleasure, plus, she’s Tamara’s younger sister. Roman doesn’t see an issue. “Go for it,” he says. He reveals he wanted to reunite with Kate and that didn’t go well.

Related: Next week on Days, torn between two lovers

At Paulina’s, she eats the sweet potato pie Chanel made and calls it almost as good as her grandmother makes. Chanel gushes at how nice it was to hang out with her mama without stress. Paulina couldn’t agree more. Chanel wants to put her past behind her, no more marrying for money. She wants to change people’s lives, like her mama. Paulina thinks Sweet Bits will be a success. Chanel is proud of her mom too. She tells her she knows she could have been trying to maximize profit. Paulina feels guilty.

At the mansion, Bonnie tells Justin she’ll meet him at the restaurant. She looks upset as though she’s trying to fight tears. Once he’s gone, she looks depressed.

At the pub, Allie is happy to talk to Tripp about going into business with her friend. Chanel and Paulina show up. Paulina chastizes Chanel when she realizes that Tripp’s the one that Chanel stuck with a bar tab. Chanel says they’re good now. She introduces her mom to Allie. Paulina wonders why her daughter has not hired a person of color. Allie had the same reservations and she’ll step aside if it’s important. She does need the money as she’s a single mother. She’s determined to stand on her two feet. She tells Paulina how important the square is to her and her family. She thinks Paulina’s fabulous – as is her style. “Oh I like her, Paulina says. When she learns Tripp is going to be a doctor, she thinks he’s the type her daughter should be with. Paulina sees Abe and Roman walk in. Roman’s introduced and he has heard she’s charming and charismatic. Paulina invites Abe to lunch with her and Chanel. Nearby, Tripp gets a call from Dr. Snyder. He has to go back to the hospital. Chanel’s happy that Allie is happy dating Tripp. “Are you really?” Chanel promises. She wonders how her mama would react to learning that they kissed. Paulina appears over her shoulder.

Justin arrives at Julie’s Place and apologizes for being so harsh on the call to Steve. Steve apologizes to him and Kayla promises that they’ll try. Bonnie walks in, having had changed her clothes and hairdo. She orders white wine and Steve asks if she’s trying to impersonate his sister. Bonnie denies it and Justin goes after Steve, who calls the Adrienne act unbearable. Bonnie feels like a fool because she was looking forward to this night. She’s thought about it non-stop. Steve apologizes for upsetting her. Bonnie’s used to it. Justin yells at Steve for humiliating Bonnie. That wasn’t what Steve was trying to do. It was painful watching her try to be like his dead sister. Justin gets it. Adrienne was his wife. He feels his share of pain, even at the mention of her name. Bonnie realizes she shouldn’t have come. They’ve been putting her off for three months.