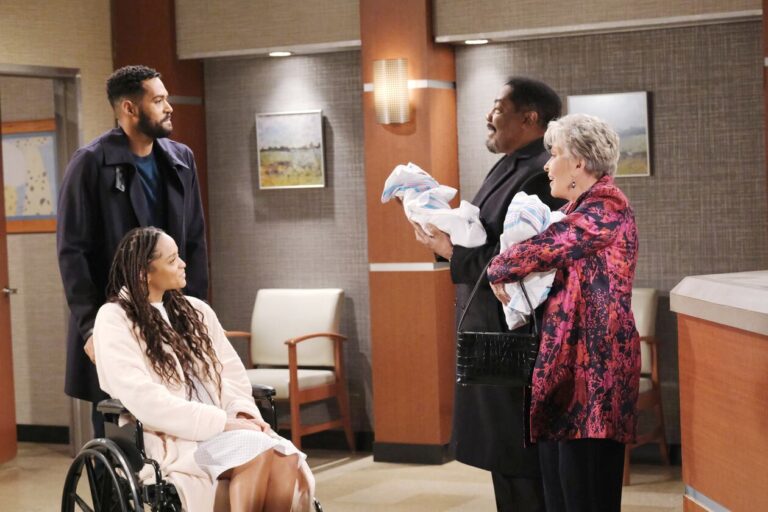 On today’s full episode recap of Days of our Lives, Anna and Jack compare notes on Gwen, Gwen continues to manipulate Chad, and Kate tells Jennifer she and Jake are done.

Abe finds Lani and Eli holding the twins at the hospital. He asks if they have names yet. They show him some silly list of names they’ve made up and Abe says he’ll go eat breakfast while they feed the kids.

Jack and Jenn come down the stairs of Alice’s together. He fawns over her beauty. Julie wakes up, thrilled that they’ve reconciled and that Jack stayed over. Julie runs off to cuddle her great-grandbabies.

Anna and Tony drink to the new year at the mansion, where Kate finds them. Anna asks if she was looking for “young Jake.” Kate scoffs and then Anna says they know she was “doing the nasty with him.” Anna’s all for having a younger man in her life “especially one who knows how to keep the old engine running.” Kate barks at her for dragging an urn of ashes around and tells her to stay out of her business. She goes and Tony says they’ve touched a nerve. Anna talks trash about Gwen. Jack arrives and they change the subject. Then Anna decides to tell Jack her thoughts that Gwen is after their family. Jack agrees with her and shares his own thoughts on her manipulations of him and Jenn Jenn. Anna calls her a “two-faced conniving little tramp.” She wants to “confront the beast and run her out of town.”

Jake wakes up in his bed alone. He thinks about breaking up with Kate. Outside his room, Abigail calls Chad. Gwen gets out of the bed at Salem Inn and sees Chad’s still passed out. She must have tired him out.

Abby gets Jake out of bed at the mansion to tell him that Chad never came home last night. He tells her about his break up. Abby’s comforting. Jake thinks all it was for Kate was sex, but Abigail points out that it was obviously more, for him.

Back at the Inn, Chad wakes up with no memory of last night. He finally remembers kissing Gwen and asks, “Did we?” Gwen whispers, “Yes we did.” Gwen pretends that she’s chagrined over what they did, especially since Abby’s her friend. Chad holds his head in his hands, finding it hard to believe that he did this to his wife. Gwen plants seeds that Abby doesn’t care about his marriage as much as him. “You wouldn’t even have looked at me if Abby hadn’t betrayed you first.” Chad blames himself for making things worse. Gwen links his pain to her pain over losing Jake as a boyfriend. Gwen encourages him to tell Abby the truth. Chad listens to Abby’s voicemails and thinks she sounds worried for him. Gwen tries to make Chad think she’s just a good actress. Chad apologizes for last night, for taking advantage of the situation and her and it makes him sick. If he was sober, he never would have touched her. He goes and she laughs.

Julie arrives at the hospital to see the babies and Abe takes her for breakfast. Later, they meet back, and finally, the names are revealed. The girl is Julia Harriet (Jules) and the boy is Carver Malcolm. Abe and Julie are touched by the names. Eli and Lani canoodle and kiss once back in her room, while Abe and Julie swoon over their grandbabies, proud that they’re their namesakes. Once they go, someone stares at the kids…

Jenn runs into Kate in the square. They wish each other a Happy New Year and Jenn apologizes for assuming she was still boning Jack. She had no right to take her to task. Jenn admits she knows about Kate and Jake but she won’t tell anyone. Kate confesses that she’s sure she and Jake are over. Kate tells her the reason behind it and Jenn asks why she doesn’t want anyone to know about her and Jake. Kate thinks that after being with two DiMera men, she needs to tread carefully. Jenn asks if Kate’s embarrassed by Jake.

Jack watches Gwen walk into the mansion, with her clippings in his hand. Upstairs, Abigail leaves Jake’s room as Chad appears. He takes in Abby’s robe and Jake’s lack of a shirt and looks upset.

In the next full episode of Days of our Lives, Jack confronts Gwen.