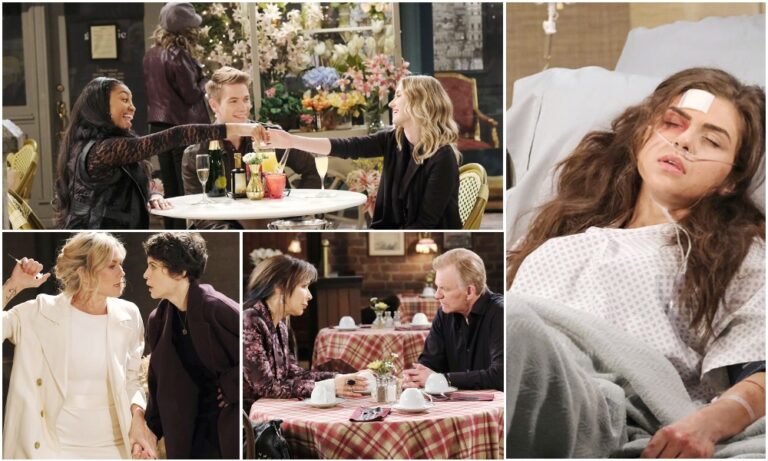 For many viewers, this was one of the most depressing weeks with Sarah’s devastating sendoff and Ciara and Ben nowhere near to reuniting. We also had Julie matching her dress to her cardigan to her earrings to her necklace. That was almost worse. While Julie’s yammering for half the week turned me off once again, Doug saved the day and gave her a lecture and then made out with her. Crazy!!

Chanel blasts her way into Salem

Chanel is who I always thought Allie would turn out to become or Ciara. Since we didn’t get that, having spoiled Chanel on the show will either drive some to drink their own mimosas or give others one more thing to be entertained by. So far, I’m enjoying the heck out of her. I’ve missed fun-loving and bad girl Nicole and now we have Chanel. I loved her passion and arguing with Claire. I loved how Paulina has turned out to be not just your average fun stunt cast but a deep and caring person. I felt for Paulina and Chanel during the lecture about sending Chanel out on her own to make her own money.

One pitfall? Claire shouldn’t be drinking while she’s on medication for her mental illness. This was short-sighted by the show, as usual, and unless she’s going to go off her meds, or have issues, why go down that road? Did someone forget that her medication won’t be effective if she drinks?

I understand waiting for the tests to come back before they tell Ciara she has amnesia, but everyone was making this a bigger deal than it needed to be by keeping the truth from Ciara. Julie telling Doug that Ciara’s too “fragile” to learn the truth was ridiculous. She’s hardly fragile. And Ben telling Jake that Ciara could have a “relapse.” WTF? What kind of bloody relapse? She isn’t in remission from any disease. She was involved in an accident. It’ll be difficult on her no matter when she finds out, but waiting only makes it worse when she realizes her family let her marry the Necktie Killer. Cause you all know that’s what’s coming! I was glad Ben told her and that he came prepared with proof. I also feel more invested in this story than the whole Romeo and Juliet fiasco and the kidnapping as a way to pine for this couple before they eventually reunite.

My issue with this story:

Ciara would have, in reality, called for Kayla or a nurse to get Ben out of her room if she thought he was going to strangle her. I thought this was really stupid to overlook. It took me outside of the story as did Ciara’s dialogue and odd feistiness.

I honestly don’t care who killed Charlie. But so far, I don’t believe Sami, Allie, Kate or Tripp or even Ava did it. This story is moving very slowly, which is outside of the usual fast pacing for Days of our Lives and I really am starting to wonder if Charlie killed himself.

Roman in Kate’s orbit again. I like it. I enjoyed them as a couple when they were together.  I would love to see them reunite and Jake back with Gabi.

Meanwhile, though I am enjoying Rafe and Ava together, I can’t help but nod my head when other viewers remind me that she murdered Shawn Brady Sr. and raped Steve. Why kill off Charlie Dale the rapist because they couldn’t reform him when they’ve got a few rapists still wandering about Salem? I mean are the other rapists grandfathered in?

In the 90s or early 2000s, Kristen arranged to sell Susan into slavery as a harem girl for The Supreme Leader by drugging her. At the time, I hated Kristen for it. Over the years I’ve loved and hated Kristen. I’m a fickle fan. There are loads of us, here for the story, the drama. It wasn’t Kristen’s fault that Sarah got injected with Rolf’s drug, but she could have at least waited to see how it affected her before shipping her off to an island, which I’ll assume is either Melaswen or Tony’s island. I was horrified, and normally don’t want people killed off but a huge part of me wanted Kristen killed off on Monday’s episode because of this. I’m calmer now and don’t want that.

Some of these storylines that we may have liked several years ago don’t hold up today. We’ve changed, society has changed. Many viewers are really angry that Kristen could be so heartless. But she hasn’t changed. Days hasn’t changed. We have. As soon as I saw Xander’s reaction to Sarah “leaving him,” I was into it. Team drama and all. I still believe we’ll see Sarah again. I’m crushed that they pulled this couple apart just before they could marry, but this isn’t my story to tell and I don’t know how it’s going to end up. The silver lining is that Paul Telfer gets to show his devastation, and possibly he’ll revert a little more to a bad guy. The fallout could be interesting. I’m curious if Xander will find out from Rex that “Sarah” dumped his ass, too.

Will Sarah’s story go on for several months, giving Xander time to dig deeper into his bad boy side? And will Sarah be okay on that island hallucinating? Will she be alone? We all have a lot of questions. Why did Days decide to change both the DiMera and Kiriakis mansion sets at the same time? Does that have anything to do with new storylines coming up? Is it just cheaper to put them together and take them apart? Am I reading into it too much because I don’t really understand the reason behind it? See? Loads of questions. I’d love to hear your thoughts.

This is for anyone who doesn’t realize that crazy things have been happening on Days for decades. The mask idea isn’t new! If you’re going to watch the show, you won’t have any fun if you don’t suspend disbelief. Not that I don’t understand where you’re coming from…