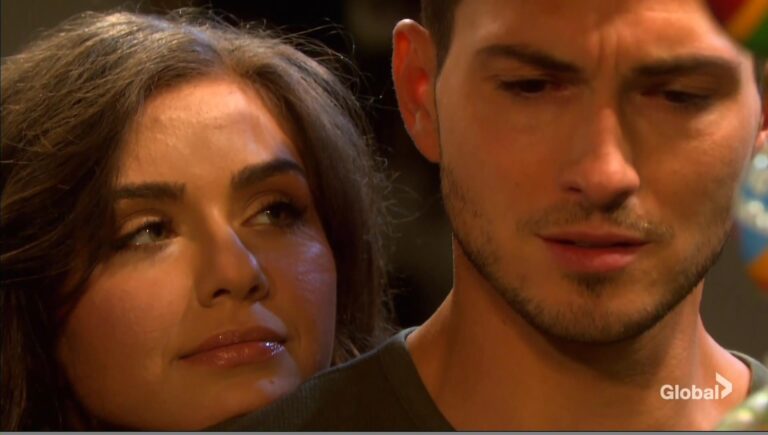 Welcome to my Days of our Lives opinion for the week of December 21 – 25.

Christmas came to Salem for three days, which meant that families weren’t blended as usual. It was more realistic, but many were missing several family members at the Horton Christmas ornament hanging.

It’s been only two months and Sarah is more annoying, more obnoxious now than she was when I took a break. Her scenes all feel forced with Philip, and it’s obvious that he’s playing her. The whole mistletoe kiss scene between her and PhillyK and Xander and Chloe was lame. It might have appeared to be funny while writing but possibly lost something in translation. I’d rather have seen some romance between the actual couples, myself. It was good to see Victor, who was adorable in that Santa hat, and Xander’s chemistry with Chloe surprised me, but otherwise, the festivities at the Kiriakis manse weren’t of interest to me.

That Christmas craft Rachel did for her mama seemed like something a four-year-old would be able to create. Did they SORAS Rachel a few years between September 11 and December 9? Or is she merely prolific AF?

Last Friday saw Tony and Ana’s Christmas return, which was heartwarming, though that’s all we saw of the family festivities, with the exception of the DiMera men’s visit to see Kristen in the pokey. Dr. Rolf giving Kristen and Chad a photo of themselves with Stefano was weirdly touching, and I was surprised to laugh aloud when Chad forgave Rolf for trying to murder him. Only the DiMeras. I was really psyched that Anna is already overly curious about Gwen the Gaslighter and I can’t wait until she outs her. If that’s where this is going. I saw a little more of Kate and Jake’s relationship, which appears to be 99% physical. I’ve no problem with that. Gaslighting Gwen intercepting Jake’s gift meant for Kate and gifting it to Abigail was fun, though I again questioned why Jake wouldn’t simply tell the family that he bought it for Kate.

Over at the townhouse, we had a Shawn and Belle wedding, which was sweet. I love that these two are still around. John sobbed throughout an old movie classic that I’d never seen before. It was the first time I’d seen him since he was out of his coma. In real life, I don’t have a problem with a grown man crying, but seeing kickass John Black sob over a movie was startling. I’ll wait to dig into that until I see more of how much he’s changed. My big question is to ask what the point is of his changed behaviour.  I gather we don’t know yet. We also still don’t know what happened to Will. He turned up, left the room, and never came back for the rest of the holidays.

The Hanging of the Ornaments

The next Christmas event was the ornament hanging. It’s always lovely to see the characters trim the Horton tree with their custom made ornaments. It always reduces most to tears. This year, for me at least, it was no exception, though I missed Lucas, Hope, and several others. Many viewers commented on Ben getting an ornament. There were, as usual, a few camps. The CIN lovers were thrilled to see those scenes, especially with “dead” Ciara’s “ghost” coming to his side. It was romantic for that camp. Another camp was furious that a serial killer got a precious Horton ornament, only reserved for the good people of Salem. And then there was me, who hadn’t seen the show in two months, and realized I’d missed out on a lot. I think it’s important that they cater to whoever is popular on the show, especially since the ratings are so low, but I didn’t care one way or another. It might have been sweeter, though, had Hope been there to give Ben his ornament and watch him hang it. Lastly, Lani went into labour. I didn’t care about that either, except that my Val turned up, which was lovely.

Roman, Lucas, Allie, and Sami had a small gathering at the pub. It wasn’t Christmassy. Joey appeared and said he was already leaving Salem. I’m fine with that. If he stuck around Salem, he’d have reminded us that he’s an Eeyore. It was great to see Sami and Roman, but the entire episodes on Christmas Eve and Christmas Day were dedicated to discussion on Allie’s rape. I suppose it was realistic, and it furthered the story, which is always good. Much of it focused on how Allie, Lucas, and Sami felt about it, also a plus, but it left many feeling as though it took away from the loving celebrations of the season. I think we’re all a little more sensitive this year, considering we’re missing our own families and friends. Sami’s return via video chat was pretty amazing and seemed like a first for this show.

I wanted to like Patchy Claus this year, but watching Steve trying desperately to find someone else to blame Allie’s rape on other than Tripp was a letdown. It’s a good thing since Tripp is innocent, but still a letdown. I found it interesting that John and Steve are at odds over this story, and that is perhaps the only thing that works for me about it.

Overall, what I was impressed with most was that there’s virtually no social distancing in any of the episodes, which makes me forget we’re even in a pandemic, for the hour a day that I watch. I’m assuming they’ve got every protocol imaginable in place and I hope that it works out for them. I’d hate to see anyone get sick.