Take a look at the past comings and goings.

To read the upcoming storyline spoilers for Days of our Lives’ comings and goings, check out Days’ spoilers section. To read about who is leaving and who is returning to DOOL in 2022, check the Days news room.

Both Matthew Ashford (Jack Deveraux) and Melissa Reeves (Jennifer Deveraux) returned to Days of our Lives for the Horton’s Christmas celebration on Friday, December 24 from Boston. Look for them to say goodbye to the family on Thursday, January 6 before they both head back to Boston together.

According to Soap Opera Digest, Jay Kenneth Johnson is out after Philip framed Brady. This is the end of the actor’s latest run.

Expect Eileen Davidson to reappear in Salem as OG Kristen DiMera once more the week of December 27.

Remington Hoffman is back as Li Shin on Days of Our Lives starting December 30. Check the spoilers for who he’s in scenes with and a teaser.

Greg  Vaughan is back to Salem as Eric Brady from January 28 on for a few episodes. For the reason behind his return, check out the December 27-31 spoilers. The actor will quickly leave Salem once again, though there are rumors that he may be back permanently in 2022.

Heather Lindell brings Jan Spears back to DOOL to wreak havoc on Salem once again. This time, Jan will have a powerful cohort. Lindell is back the week of December 20.

Evelyn Stephenson will be playing Sydney DiMera in Days of our Lives: A Very Salem Christmas. Stay tuned for her appearance December 16.

The children who portray Thomas and Charlotte DiMera, Cary Christopher and Autumn Gendron, will be seen on Days of our Lives this month.

Mark Colson appears once again as Gabe (Gabriel) the guardian angel. For those who didn’t watch during the first possession storyline on Days in 1994/1995, Gabe was seen in 9 episodes  and returns Friday December 3 in scenes with Ciara and Ben. He will return again at Christmas to help John try to capture the devil.

Arya and Wynter Wells, one-year-old twins, were seen on the December 1 episode of Days of our Lives as Carver Grant, Eli and Lani’s child. Starkidz posted about this on their Twitter feed.

Kyle Lowder returns to Days this winter as Rex Brady. Rex was last seen in March 2021 and according to Kristen, was sent on a Doctors Without Borders mission where he hasn’t had access to telephones. Lowder’s first airdate is Tuesday December 7. Check the spoilers for who he is in his first scenes with.

Noel Gugliemi will be making his first appearance on Days as Jason, the goon holding Sami captive, the week of November 29. Check the spoilers for what’s to come. If the actor looks familiar, it may be that you’ve seen him on Sons of Anarchy as Louie, Fresh Off the Boat as Hector. He has played small roles in The Fast and the Furious, Training Day, and more recently, on Mayans M.C. as Louis.

Expect AJ McLean to appear as a prison transport officer on DOOL the week of November 29. Camila Banus had a photo taken with him, and he was on Instagram telling fans that he and his grandmother used to watch Days of our Lives when he was growing up. The singer/actor, AJ McLean reported in a video on Instagram,  “Oh my God, I’m freaking out,”  about his new role. He fondly remembered his grandmother, saying, “I hope I made you proud, Grandma.”

Christopher Matthew Cook comes to Days of our Lives the week of November 29. He will portray a prison employee who works with AJ McLean’s character.

Greg Vaughan returns to Days of our Lives this winter. Viewers haven’t seen Eric Brady since July, when he and Nicole said goodbye before he returned to Africa. Spoilers: Watch this video promo to find out the reason behind his return, which aired during Day of Days 2021.

Ali Sweeney will be returning to Days of our Lives as Sami Brady DiMera on November 19. Have a peek at the spoilers about her scenes from Days’ November sweeps. If folks have forgotten what happened to Sami, here is a collage of her being kidnapped from someone. Let SoapsSpoilers know who you think kidnapped Sami in our comments.

Eileen Davidson will make a guest appearance on Days of our Lives coming up this November 12 and November 15. Not to worry, this does not mean that Stacy Haiduk is out. Haiduk will be back this week to portray Susan Banks and Kristen DiMera on November 12. Since they used Davidson in Beyond Salem, this is likely a similar type of appearance. SPOILER: Satan will turn into Kristen DiMera with Davidson playing the part for a bit of a fun throwback.

Marla Gibbs is back in Salem as Olivia Price for Abe and Paulina’s wedding. Days’ November sweeps shares a few tidbits about what’s going down around the time of the wedding. Check it out to see if Paulina’s big secret will come out.

Days of our Lives is bringing Vincent Irizarry back to the show for the Halloween episode, November 1. Irizarry played Deimos Kiriakis and was accidentally stabbed to death by Nicole in June 2017.

Blake Berris returns to Days as Nick Fallon as a part of the Halloween November 1 episode when MarDevil brings villainous Salemites back from the dead to wreak havoc on Salemites. Last we saw Nick, he was killed by Gabi in May 2014.

Days of our Lives has Mike Manning returning to Salem as Charlie Dale for the Halloween episode on October 31 and November 1. Here’s a little greeting from the actor’s Twitter page. As folks will remember, Charlie was killed off by Jan Spears in May.

Jake’s associate from Philadelphia, Carmine (Richard Stevens) turns up in Salem this week, which (spoiler) spells trouble for Abe. The actor will be leaving on November 2. Check the Days spoilers for the reason behind his departure. 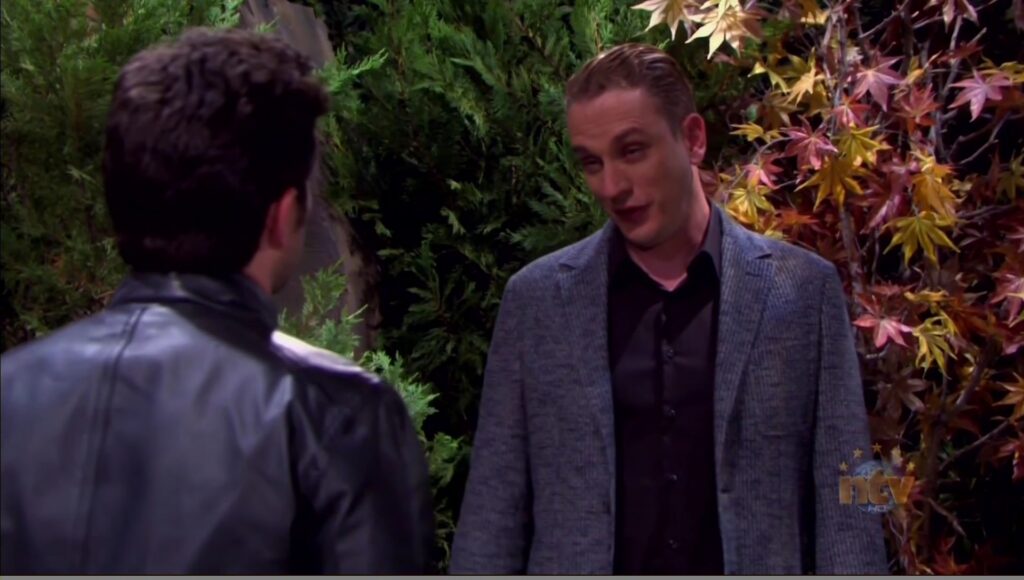