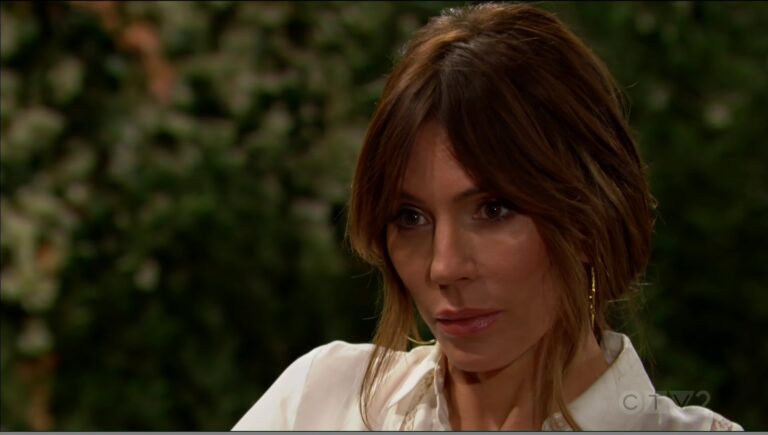 When Finn’s memory returns, Sheila begs for forgiveness, Ridge and Brooke share a romantic moment during a power outage, and Jack turns to Taylor and Thomas for information about Li.

Mike can’t resist Sheila’s request to help with Finn as they reflect on some of their best moments together.
Finn wakes up, seizes and flatlines.

Paris, Carter, and Quinn have an unexpected ending to an emotional day.
Grace comforts her daughter.

Sheila remembers her time with Mike from years gone past.
Paris takes a ride home from Zende.

Steffy gets sentimental as she remembers loving memories with Finn.

Steffy takes a call from her parents and tells them how she’s doing.

Sheila is able to shock Finn and he comes back to life.

Finn and Steffy share a cosmic connection as Sheila fights to save Finn’s life.

Finn wakes up and sees Sheila. He appears confused.

Finn awakens and is startled by his surroundings and his situation when he sees Sheila and Mike.

Finn asks where Steffy is.

Liam and Hope gossip about Paris and Carter’s non-wedding.

Liam tries to get Hope to take a mental break.

Ridge tries to reassure Taylor that Sheila won’t get to her.

Brooke takes a fall down the stairs.

A power outage has Ridge tending to Brooke’s leg.

B&B opinion: Glorifying infidelity only when it suits their mood

Jack visits Taylor and Thomas in hopes of getting information about Li and Finn.

Jack tells Taylor that his wife left him.

Finn asks Sheila to let him go to the hospital but she refuses.

Sheila attempts to keep Finn calm as his memory comes flooding back.

Ridge feels bad Brooke hurt herself when he wasn’t home.

Ridge asks to come home and after Brooke agrees, they kiss.

In Friday’s B&B recap: Ridge informed Taylor of his reunion with Brooke.

Eric and the family toasted to the reunion and Donna.

Taylor grills Deacon for information about Sheila before spilling the tea about Ridge and Brooke.

In an attempt to escape his captivity, Finn plays a trick on Sheila.