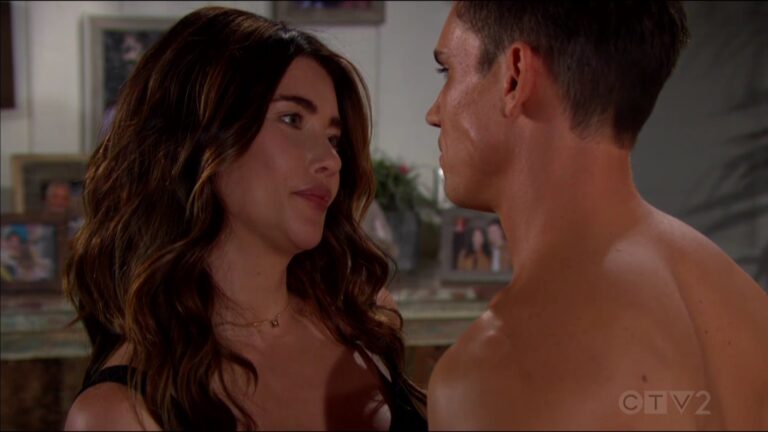 Find out what’s coming up on Bold and Beautiful 2 weeks ahead.

Li chats up $Bill about Sheila and Jack, while Thomas receives support from his family, and Brooke and Deacon agree to disagree.

The Forresters still find it hard to believe Sheila is dead.

Bill offers to listen if Li wants to talk about Sheila.

Deacon’s disgusted that Sanchez showed everyone the toe.

Li tells Bill she respects him.

Steffy and Taylor get real with Thomas about Douglas.

Steffy thinks Hope’s environment is loving but she thinks Thomas could provide that, too.

Hope and Brooke have lunch and talk about Douglas and Thomas taking him from her.

Eric gives his blessing and grants a special request to Thomas.

Steffy maintains that Brooke took everything from them and they need to take it back.

Ridge confesses to Brooke the kiss he shared with Taylor.

Li tells Dollar Bill about what Jack did, not telling her that their child was his biological son.

Thomas asks his grandpa to move in with Thomas.

Eric is happy to have Thomas and Doulgas move in.

Li and Bill talk about Sheila.

Steffy and Thomas watch their parents get close.

Opinion! How to fix Brooke Logan!

Deacon sees a redhead and gets excited.

Brooke reacts to Ridge’s confession. It hurts. She’s disappointed, especially since it was his ex-wife who he shares kids with.

The bartender reminds Deacon that he has an appointment with his parole officer.

Deacon realizes he’d be a fool to screw everything up and wind up in prison.

Steffy pushes Taylor to admit that she’s ready for a future with Ridge.

Thomas tells Hope that Douglas should live with him, his father.

Thomas and Hope get emotional over Thomas’ plan to live with Douglas.

Steffy thinks that kiss her mama shared with Ridge is on his mind.

Taylor thinks Brooke’s trying to keep attention on her.

Steffy thinks her mom and Thomas are in similar situations. “He needs Thomas and you need Dad.”

NotSheila winds up at Deacon’s house and he doesn’t know who she is but she intimates she wants him.

Thursday’s B&B recap: Sheila reveals herself to Deacon as his lover

Taylor and Steffy go on the offensive with Ridge about Brooke’s past transgressions.

Steffy and Taylor bash Brooke while Ridge tries to defend her.

Brooke reveals to Hope that she learned Ridge kissed Taylor.

Hope has other ideas on why Ridge kissed his ex and asks her mom how she feels about that.

Deacon wakes up in bed with a complete stranger.

Deacon is rocked to wake up with Sheila.

Carter and Quinn get busted kissing in the Forrester CEO office.

Ridge is pissy when he sees Carter and Quinn make out.

Ridge shows everyone the photo of Sheila’s removed toe to remind them all that she’s dead.

Finn and Steffy show each other their great love for the other.

Steffy canoodles with her husband after he surfs.

Sheila tells Deacon that she pulled out her hair and cut off her toe to throw everyone off.

Deacon’s shocked and grossed out that Sheila cut off her own toe.