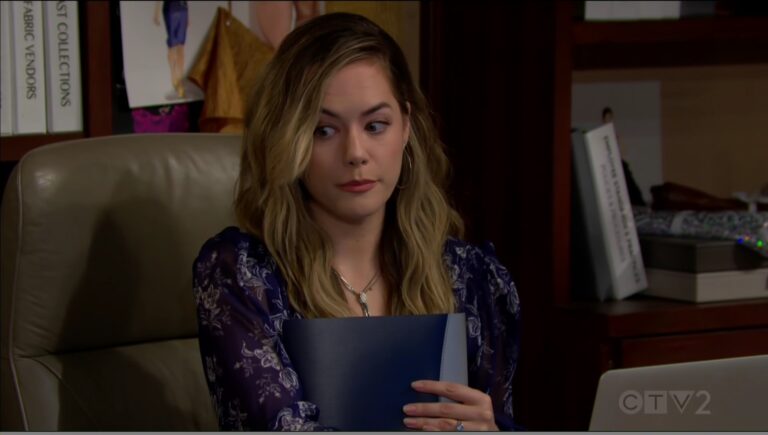 Due to recent preempts, the epsiodes may be moved to new airdates.

Coming up this week on the show, it looks as though a wedding for Carter and Paris is in store. It may even happen this week since in this week’s Bold and Beautiful spoiler video, Carter tells Paris, “I wanna get married right away.” Mama Grace isn’t having it and tells her daughter, “I won’t let you do this, Paris.”

Paris has something to say about that. “Nothing and no one is going to stop this wedding.” Hmm not even Quinn?

Quinn barks to Wyatt (Darin Brooks) that she can’t let him throw his life away. Wyatt realizes, of course, what we already know which is that Carter’s still in love with Quinn. What happens when Quinn finds Eric in bed having pickle ball with Donna and she kicks Eric’s butt to the curb?

Will it be too late? We’ll tune in this week and find out. Meanwhile, watch the Bold and the Beautiful spoiler video.

Are wedding bells in Carter and Paris’ future? 💙 Tune in this week to find out. #BoldandBeautiful is new this week on @CBS! Watch the latest episodes on @paramountplus. pic.twitter.com/S8lYL25Afj

For those who missed out this weekend on the Creative Arts Daytime Emmy Awards, the show is celebrating a big win having Bold and Beautiful’s Ted King win for Outstanding Guest Performance in a Drama Series. Congrats to Ted King. He had some steep competition. Did you agree with the win or were you hoping someone else was more deserving of the Emmy?

Carter moves on from his love for Quinn and proposes to Paris.
One thing leads to another and it gets physical between Sheila and Li again.
With Sheila in hot pursuit, a frightened Li makes a run for her life.
Sheila bumps Li’s car right off the pier and into the water. Li’s car catches fire.

Really B&B, yet another sacrificed character for Sheila who no longer needs to be there.

I don’t agree, Li has to come back, she’s not dead#BoldandBeautiful #Li #Sheila pic.twitter.com/GbAw8YUQGg

Bold and Beautiful Opinion: Stories Finally Moving, But Why Are Drama and Juicy Details Happening Off-Screen?

Bold and Beautiful was pre-empted today due to the ongoing hearings. The spoilers have been moved one day ahead.

Paris says yes to Carter’s proposal and agrees to be his wife.
Carter wants to marry as soon as possible.

Sheila chokes Li.
Sheila and Li get into an accident. Li’s car is engulfed in flames and she goes over the pier and into the lake.

Bold and Beautiful Opinion: Stories Finally Moving, But Why Are Drama and Juicy Details Happening Off-Screen?

B&B recap: Ridge is upset with Carter for proposing to Paris

Paris instigates an argument after flaunting her engagement ring to Grace.
Ridge offers Carter a truthful perspective on his situation with Quinn and Paris.

Once Li is gone, Sheila is left to take care of Finn.
Ridge makes a stunning admission about Quinn to Ridge.

Paris and Carter up their wedding date amidst push back from their loved ones.
Carter makes a stunning admission about his genuine love for Quinn to Ridge.

Quinn tells Eric about Carter proposing to Paris.
Eric worries about Carter.
Quinn comments that Eric loves pickle ball and is surprised that he doesn’t go and do it daily.

Ridge and Carter have it out about Carter’s proposal.
Hope is uneasy watching Grace yell at her daughter over the upcoming marriage.

Quinn finally reveals her true feelings to Carter.
Carter can’t get Quinn out of his mind.

Carter asks Ridge to come to his wedding.
Carter fakes a smile when he finds his bride-to-be.

Grace goes to Zende to stop the wedding.

Quinn and Bridget bust Eric and Donna in bed.
As Carter and Paris’ wedding begins, Quinn grapples with having lost her two true loves.
Eric promises a bright future to an overjoyed Donna.
Quinn and Bridget learn a shocking truth about Eric’s pickleball “exercise.”

Quinn embarks on a comical journey in the name of true love.
Frantic, Sheila enlists her longtime partner in crime to help save Finn’s life
A passionate love affair once denied is joyously renewed.