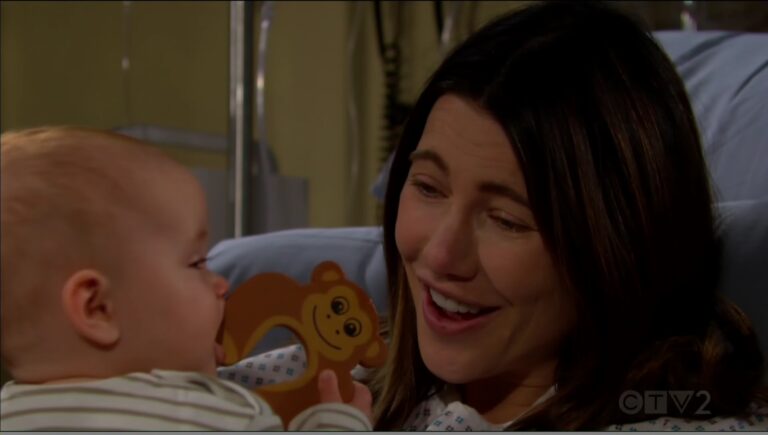 In the Friday, April 29, 2022, full episode recap of CBS’ Bold and the Beautiful, Taylor brings Hayes to visit Steffy, Bill arrives to offer his support, and Deacon tries to get Sheila to open up.

We also have Thursday’s B&B recap where Liam interrupted Sheila’s attempt on Steffy’s life and Hope got more paranoid.

At the hospital, Hope eavesdrops as Liam assures Steffy that he will always care about her. He promises her he will always be in her life. She doesn’t know how she will go on.

Liam tells her this is all unfathomable. She wants to hold Hayes. Kissing her on the head, he agrees to make that happen.

Out in the corridor, Taylor and Brooke continue to argue about Liam’s role in Steffy’s recovery. Brooke is glad that he can be so helpful, but reminds her that Liam is Hope’s husband, not Steffy’s.

Ridge gets between the women and reminds them that the most important thing is Steffy’s recovery.

Bill rushes in. He just got back to town. Ridge isn’t thrilled to see him. They fill him in on the latest. Taylor doesn’t want to force her daughter to remember more.

Hope joins them and tells Bill his son will be happy to see him. She’s really tired. Liam comes out next and his father offers him whatever he needs. He’s already got private investigators looking into this.

Taylor offers to bring Hayes to the hospital and wanders off with Ridge. Liam asks his wife how she is doing.

She sits and listens as Liam tells his father what a powerhouse Steffy has been. This all seems very random to Liam. Bill knows how frightening this must be for him and encourages him to focus on the positive.

Ridge joins Bridget as she tells Steffy she’s doing well. They discuss her pain levels. They are higher than Bridget wants to hear. Steffy insists she only needs to be with her kids.

After the doctor bustles off, Ridge asks his daughter if she’s had any more memory flashes. Steffy wants the monster who killed her husband caught more than anyone. As she tries to remember, she wonders why she can’t.

Taylor enters with Hayes and places him in Steffy’s arms. “It feels so good to have you in my arms,” she sobs. She tells him how much she loves him and promises he will never be alone. Ridge holds Taylor.

Steffy tells her son that they will get through this. The baby cries. Bridget returns and announces that the patient has improved so much she is well enough to go home. Everyone is thrilled.

B&B spoilers up to May 6

Sheila paces her room and flashes back to killing her son. She repeats how sorry she is and that it was a horrible accident. She’s determined to make sure that Steffy never remembers what happened that night.

Deacon shows up and immediately recognizes that she has someone in her sights again. He understands why she might be a little more intense than usual.

She explains that Steffy is still conscious. He assumes she must be relieved and grateful that her girl Taylor’s daughter is getting better. Sheila doesn’t look relieved.

Deacon wants to be supportive. He’s sure she’s suffering and he’s sorry. Sheila never realized you could experience so much pain in a lifetime. Her son is dead and should be there with them.

He offers to listen to her and hit him if she wants. Laughing, she asks him not to tempt. Deacon worries that keeping her devastation inside will destroy her.

“Use me. Tell me everything,” he encourages. As they sit on the bed, he tells her there is nothing worse than losing a child. He wants to help her.

She explains that when she first came face to face with Finn, she could see herself in his eyes and felt complete, like anything was possible.

He and Hayes were going to be her redemption and she was going to become worthy of them. But now her son is gone and she is afraid she is going to lose everything else.

Deacon hopes that wasn’t the sound of defeat coming from his friend. The Sheila he knows is a street fighter and not down for the count. She tells him he can’t being to understand how this has changed her.

He is sure this is temporary. Her son would not want her to give up on life. Finn will get justice and whoever killed him will pay.