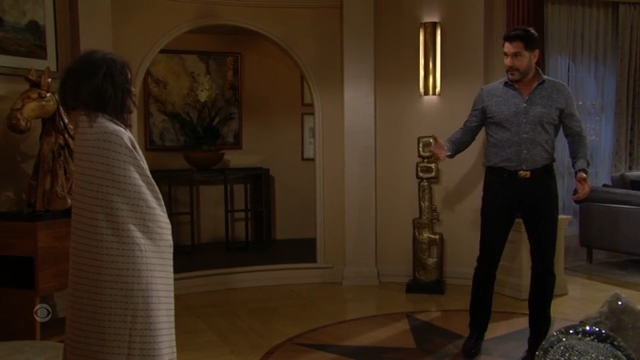 Unable to overcome her loss of Finn, Steffy moves to a mental health facility, as Wyatt and Liam worry about Bill now that Katie, Will and Justin are gone.

Finn’s drugged and Mike wants Sheila to leave him there since there’s already a death certificate. They can go away together.

Taylor admits her feelings on destiny between Brooke and Ridge.

Hope and Ridge get into it over Deacon.

Tuesday’s B&B recap: Finn risks death to get out of bed

Finn pleads with Mike to throw Sheila under the bus and help him escape.

Ridge and Brooke put the pieces of the puzzle together for Baker about Mike Guthrie.

Hope provides comfort to Deacon about his trauma before gently questioning him about Sheila.

Ridge grills Mike Guthrie about his relationship with Sheila Carter in the police interrogation room.

Finn verbally lets loose on a distraught Sheila before pulling himself out of his hospital bed.

Finn is stunned as he listens to Sheila describe what she did to Li.

Finn tries to work out how Sheila could have fed him and moved him there from the morgue, since she’s not a doctor and hasn’t been a nurse in decades.

Finn falls and Sheila worries he’ll hurt himself, before she helps him back to bed.

Brooke and Ridge help Baker rake Mike over the coals.

Thomas, Ridge and Taylor blame Sheila for this.

Bill confides in Wyatt about his current relationship status with Katie.

Bill is compassionate which shocks Wyatt.

Bill goes outside of a restaurant near the water and finds Li, alive.

Friday’s B&B  recap: Bill cares for Li in his house

Bill takes Li home with him.

Li struggles to talk but says she has a son.

Taylor looks into the rehab clinic Steffy’s at.

Finn loses it with Sheila, calling her psycho and telling her he hates her.