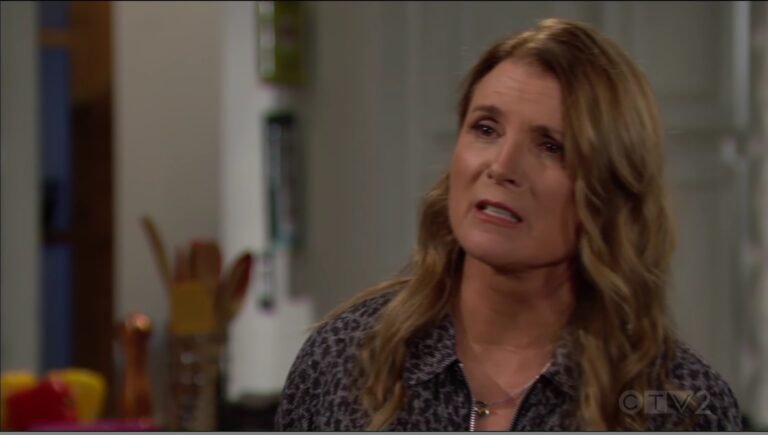 In the Monday, September 27, 2021, full episode recap of Bold and the Beautiful, Steffy yells at Sheila to get out, Carter and Quinn are shocked by Justin’s home intrusion. If you missed out, Soaps Spoilers has Friday’s B&B recap when Paris fantasized about Finn and Thomas spent time with Douglas.

Quinn and Carter jump out of bed, demanding Justin tell them what he’s doing there. He tells them to nevermind that. They’re caught! They rush to dress and Justin snidely laughs, knowing what he walked in on and everyone else will know soon, as well. Quinn tells him he has no idea what he’s walked in on. They demand to know who sent him. They know it wasn’t Eric. Justin admits he’s working for Ridge. Carter asks what they have to do to get Justin to forget this. Quinn tells Justin that he and Eric have an understanding. “Eric knows, okay? He knows about me and Carter. He gave us permission.” Justin thinks they’re nuts. “Eric doesn’t roll like that!” Carter says it’s true, not that it’s his business. Justin asks why he’d do that. Quinn glances at Carter and admits her husband is suffering from ED. They work hard to convince Justin that this is true. If he tells Ridge, he’ll humiliate Eric. She begs him to stay quiet.

At work, Ridge tells Katie he’ll find out what Quinn is up to. Katie’s surprised he has someone following Quinn. He tells her the man is a former employee. “Justin?” She gasps. Ridge hired him? Ridge says he owed him one. Katie knows they all have their secrets but Quinn probably has a few extras. Ridge doesn’t want his dad’s heartbroken. That’s where Justin comes in. It breaks Ridge’s heart to see his father with “this woman.” He seems upset all the time now. Katie knows that he and Quinn shared a lot of good hears. Ridge brushes that off. “That was then.” It seems this whole marriage is a chore. They go back and forth about how she wouldn’t be stupid enough to cheat on Eric again.

At the cliff house, Steffy kicks Sheila out after she scares the life out of her by popping in unannounced. Sheila says, “I just want to see my grandson.” Steffy yells that she’s not welcomed there. “I said get out!” When Sheila makes no move, Steffy ask how she got past the guard at the gate? Sheila says she was on a mission to see her grandson. Steffy can’t wrap her brain around this. Finn would be disappointed. Sheila knows he’s not far. She saw him go down to the beach. Steffy tells her she has five seconds to leave. “One thousand one…” Sheila counts. “Or what?” She asks. Again, Steffy tells Finn’s biological mama that she’s unwelcome. “Stop expecting people to want to see you.” Sheila seethes. “People?” She’s given Finn space. “Until you snuck back into my house!” Sheila came to see Steffy, woman to woman, mother to mother. She was hoping she’d see Hayes to spend time with “my boys.” Steffy reminds Sheila that she made a choice to put Finn up for adoption. Sheila thought she was doing what’s best. “I’m not a monster.  I didn’t come here to cause you any trouble. I just wanna hold my grandson.” Steffy says she did already when she was there without permission. Sheila doesn’t mean to frighten her. “You tried to murder half of my family.” Sheila claims she’s not that person anymore. She asks for a chance to show her she’s not the woman she once was. “Please, Steffy. Don’t keep me away from my son.” Steffy isn’t buying it. Sheila was struggling with dark demons, she tells the younger woman. Steffy calls her fake. Finn sees her for who she is. She insists Sheila’s making things worse. Sheila’s angered and asks what makes her the gatekeeper.