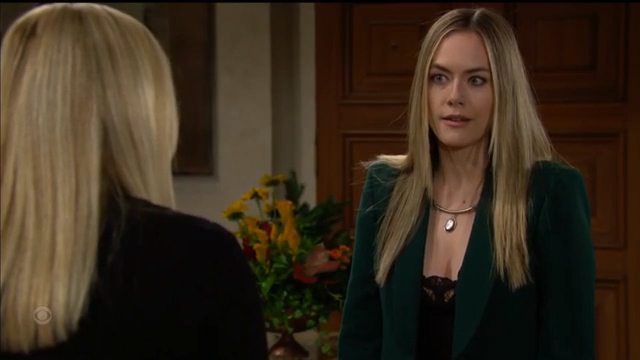 Trying to make sense of all this nonsense.

B&B threw me for a loop this week with Liam’s shocking revelation that Hope and their daughter Beth have been spending the night with Thomas and Douglas at the Forrester manse.

What? Did I miss an episode?

Hope, who was victimized by Thomas (who once played house with a lookalike doll of Hope and made Hope believe her daughter Beth was dead), is now spending the night at Fort Forrester with Beth and Douglas, the son he abused?!

Do I have that right?

Has Hope been brainwashed?

I can buy that Hope is putting her feelings aside for the benefit of her children, because that’s within the realm of possibility for this character.

But why are we getting intimate moments between Thomas and Hope, like that awkward hand touch?

I thought we had gotten past that whole “violence as romance” nonsense on daytime.

Memo to the writer: it’s possible to write dramatic and engaging stories that don’t insult victims of abuse, recovering alcoholics, law enforcement, social service workers, the intelligence of viewers, and women in general.

B&B should try doing that for a change.

Ridge never takes the “for better or for worse” part of wedding vows seriously, so it came as no surprise that he left Brooke AGAIN and ran straight to Taylor AGAIN.

It got weird when Ridge gave his parting lines not to Brooke herself, but to the door he just walked out of.

I suppose his soliloquy was meant to be high Shakespearean drama, but it only emphasized Ridge’s routine cowardice.

Am I right about this?

Thomas has a gift for daddy.

Let’s get real. Ridge has been looking for a righteous reason to drop Brooke for months and Thomas just handed it to him with that CPS call.

So why is NO ONE suspicious of how convenient this all is?

Ridge probably doesn’t care because he’s already mentally moved on to his next relationship with Taylor.

Ridge is a serial monogamist who moves from one romantic affair to the next, usually with no bachelor time between, endlessly repeating this cycle to avoid being single and alone.

Ridge makes his choice… sort of.

Of course Ridge showed up in Aspen because he wanted to lockdown Taylor before he tells Brooke it’s over.

That way, he’s got a fallback in case Taylor says no.

So while it’s amusing that Taylor wants to be Ridge’s “first choice,” could she ever really feel confident that this relationship is solid?

A new destiny… for now.

Taylor has said that she would not be part of ending Brooke’s marriage because that’s what Brooke would do. Come again?

That’s something Taylor has actually done before and here she is making out with Brooke’s husband AGAIN.

First, tell Ridge that before they can be together, he needs to break up with Brooke, get divorced, get his own place and see a therapist.

Then, and only then, Ridge can take Taylor on a dinner date that does not involve smooching or hunching.

Ridge loves the pursuit, so make him work for it!

Second, tell Steffy and Thomas to back off and mind their own business, which is Forrester Creations which is what the show is supposed to be about, no?

Matchmaker Steffy, give it a rest!

Steffy the nag is such a waste of a legacy character. She’s a successful businesswoman married to a handsome not-dead doctor with a fabulous house and two adorable kids.

Yet she dropped it all when she had the opportunity to whisk Taylor off for a girls’ weekend designed to give more time to campaign on behalf of her daddy’s peen.

If Steffy is so desperate for her parents to be together, she should DO something about it.

Find a way to trap Ridge and Taylor together. Set Brooke up for a fall. Fake an illness.

Where is the real Brooke Logan?

Steffy keeps telling us that Brooke is a poisonous viper with no moral code who can’t control her libido – that lady sounds fun!

But the current version of Brooke is a helpless sad sack who is always confused and only slightly aware of what’s going on around her.

Is it necessary for Brooke to be dumbed down to imbecile level?

For instance, Brooke not knowing why Ridge went to Aspen is just idiotic. Brooke has been down this road many times before, so there’s no reason for this foolish writing.

Give us the Brooke we know!

Brooke should hire Deacon to dig into what Taylor was doing while she was away from L.A. It should have happened weeks ago!

What might Deacon find out that Taylor wouldn’t want anyone to know? A lover left behind? A recurrence of her alcoholism?

Bill, about Ridge: “Trust me. I don’t want to see Forrester’s ugly mug any more than he wants to see this work of art right here.”

Some fans are seeing alleged clues that they think point to everything we’ve watched for the past few months being Brooke’s very long (and boring) dream.

I’ve had my own theories about a dream but I’ve re-thought that idea, and here’s why.

What would a backward time jump achieve? Do we really want a re-set that is going to start another six months of “Thomas has made strides” and “who will The Dressmaker choose?”

What do you think? Will Taylor and Ridge make it work this time? Can Steffy find something else to do?

Will Brooke remember who she is?