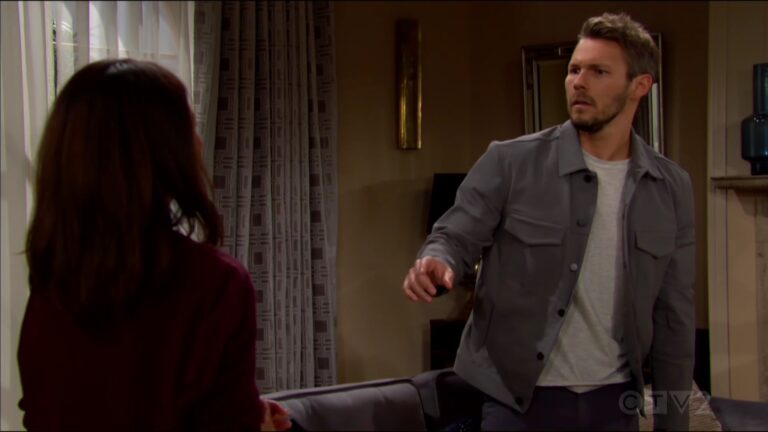 In the Tuesday, July 26, 2022, full episode recap of CBS’ Bold and the Beautiful, Deacon wants Taylor, Bill learns who Li is, and Finn repeats to his bio mother that he’d like to go home, as Taylor and Ridge travel to Monaco.

We also have Monday’s B&B recap where Dr. Jordan came by $Bill’s to examine Li, while $Bill’s mention of Finn had her memories flooding her.

In Taylor’s office, Taylor tells Deacon that she and Ridge are headed to Monaco to be with Steffy, who she says is having issues struggling with her grief.

He’s glad to hear and thinks it’s a good idea. He’ll be thinking about her when she’s gone. Taylor opens and closes her mouth a few times and then tells him they shouldn’t see each other like this when she returns.

She doesn’t want to appear hurtful or insensitive. He gets it.

He won’t fight it. He knows this has to do with Ridge. “It’s always Ridge.” She nods. She can’t handle more conflict right now, and neither could her kids.

Deacon worries he’ll ditch her the way he did Brooke. She sighs. He reminds her Ridge is close to recommitting to her so why is it that he gets to dictate who she gets to see? “It’s a Sharp point,” she says, playing on his surname.”

See what I did there?” They smile but all she can think about is her kid being depressed.

When this is over, he asks that they see where this can go, whether it be friendship or more.

He points at his bod and asks if she doesn’t want to know about “all this.” She starts laughing. It can’t happen because she’s focused on her kid.

She’s flustered and asks him to go. “I have things,” she says, making him grin.

At Li’s place, Sheila paints her toe nails as Finn begins to come around.

She apologizes for sedating him and doesn’t want to keep doing that. He’s groggy. She lays down the rules.

No more outbursts. He ignores her. He just wants to go home to see Steffy. “Today.” He bites that his mother is dead because of her. Sheila thinks he was “twisting” his words.

He reminds her she was chasing her when she died. Sheila claims to love him and Finn asks her to prove it and send him home. She’s left a path of destruction in her wake and it has to stop.

She agrees and it has. She only ever wanted to meet him and apologize for giving him up. He repeats himself — wants her to set him free. She harps on how Steffy and Li betrayed her.

Finn just repeats himself. He wants to go home. Steffy and Hayes need him.

At Bill’s house, Li flashes back to Finn in his hospital bed as Dollar Bill brings her tea. She’s all cleaned up and he comments that she looks great.

He asks if she slept well, if she wants to tell him her name and what happened to her.

She says nothing. He perseveres. He thinks they’ll have a breakthrough today.

He offers to tell her about himself, “Which is my favorite subject anyway.” It might spark something. He tells her he has three sons, and she runs away. Liam turns up.

He looks for “this total stranger” he invited into her house. “She’s in her room,” Bill says. Liam’s confused and doesn’t know who his dad is right now.

Bill wants to help her and thinks his son would understand that.

He wants to make a difference for one person, without his check book.

Liam says he doesn’t know her.

They could be unstable, a drug addict or… Bill thinks he’s being ridiculous and asks him to keep his voice down.

He’s trying to get her to trust him.

“Call it my Spencey senses tingling.”

Liam smirks and Bill doesn’t like it. Li returns and eavesdrops as Bill says he has to help her. He needs to do this.

When Li shows herself, Liam’s rocked to see that his guest is Li.

He says he knows her. Bill’s surprised. He’d never met her. Li starts remembering the whole accident again and tells them that Finn’s not dead. “My son’s alive!”

Zende bursts into Ridge’s office as Ridge is cleaning up his desk.

He learned they’re going to Monaco and asks Ridge to give his cousin his best. Ridge rushes off.

Ridge and Taylor get on board the Forrester jet. The captain tells them they’ll be in the air as soon as possible.

Trevor goes to the cockpit and Taylor says she wishes they were there already.

They talk about Steffy keeping her struggles from them and how the family comes together.