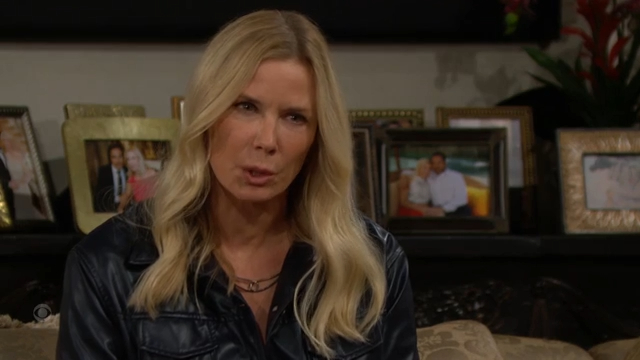 In the Wednesday, September 21, 2022, full episode recap of CBS’ Bold and the Beautiful, Steffy’s happy to see Thomas and Zende collaborating, Dollar Bill talks to his sons about being caught in an embrace with Brooke, and Hope’s stunned by Brooke.

We also have Tuesday’s B&B recap where Steffy stirred the pot with Brooke and kept her from talking with Ridge, and Hope learned that Dollar Bill was caught hugging Brooke.

At home, Brooke leaves a message for Ridge.

She’s sorry she missed him last night and this morning and assumes he’s on his conference call.

Hope appears and they discuss what happened last night with Steffy intercepting her call to Ridge.

Hope is shocked that Steffy told her she wasn’t going to be with Ridge for long because he’s with the woman he truly loves.

Hope’s aghast. She has no right! Taylor and Steffy have gone too far.

Brooke agrees and each of them plans to have a talk with the other women.

At her house, Steffy looks at a beautiful sketch that Thomas and  Zende worked on together.

She loves the Forresters’ collaboration and thinks that all they need is for their mom to reunite with their dad.

She asks if she’s really inviting Zende into her quest to reunite her parents.

She tells Zende not to let her kids badger him.

Steffy just wants her father to come to her senses and leave Brooke for her mama.

Taylor shoots her a look.

Steffy believes in the direct approach but Taylor thinks that not every thought in her brain needs to come out.

Zende leaves with the sketch and Taylor begs them to stop parent trapping her and asks them to focus on themselves.

Steffy just can’t do that because she knows her parents are meant to be.

They’re both happy he’s making up for lost time. Thomas goes as Brooke appears in the doorway.

Brooke tells Taylor that her daughter’s out of control and she expects her to stop it.

Taylor’s baffled so Brooke explains that her daughter is interfering with her marriage. As a grown woman, she should focus on her own marriage. Taylor admits she told her kids the same thing.

Brooke was frustrated last night and explains last night was supposed to be a special night but when she called, Steffy answered and refused to put Ridge on the phone. Taylor is shocked. She doesn’t want to believe that.

B&B opinion: Is Taylor a queen?

At Il Giardino, Liam and Wyatt wonder why Dollar Bill summoned them. He just wanted to have lunch with his boys. “Now give me a kiss,” he jokes.

Liam grosses out and then quickly asks why Ridge found Brooke in his arms.

Bill smirks and finds that amusing but Wyatt gasps that they’re together.

Bill calls it a gross exaggeration. Forrester made something out of nothing because he’s riddled with insecurities.

They were discussing Katie. “Why she puts up with Poser The Clown, I will never understand.”

It irks him that Ridge isn’t on his knees thanking whoever blessed him with Brooke. Instead, he manipulates her, takes her for granted and Brooke sticks around.

Liam says that Ridge does the same. Wyatt thinks that’s the destiny part, while Bill doesn’t know what she sees in him.

Liam thinks she likes that he’s a family man, he’s looser, he laughs more and has a sense of humor.

He sees the connection and deep love between him and Brooke and knows Steffy and Thomas are working against them.

The men all agree that grown kids should stay out of their parent’s lives. Liam talks about all of these sudden Forrester gatherings which keep Hope in Thomas’ orbit.

Dollar Bill’s sure it’s to ensure she sees him as the doting dad.

Liam thinks it’s getting to Hope.

She also sees Steffy and Thomas disparaging Ridge and Taylor cozying up to Ridge.

She’s not sure how much to tell Brooke because she doesn’t want the Forrester/Logan war to return. Bill calls Brooke a fighter who won’t let anyone undermine her marriage.

Hope turns up at Forrester Creations as Paris and Steffy are looking over the sketch.

Hope asks to talk to Steffy alone so Paris goes and Steffy calls Hope chasing Paris out of there “inappropriate.”

Hope calls her inappropriate for trying to harm her mom’s marriage to Ridge. She tells Steffy she heard what she did last night and calls Steffy obvious.

Steffy shrugs her off. She believes her parents belong together.

Hope thought she was past this and wanted to bring the families together. Steffy calls this about her father’s happiness.

About a woman who will never throw herself into another man’s arms.

She says Brooke disrespected her dad long enough and it’s time for a reunion between her parents.