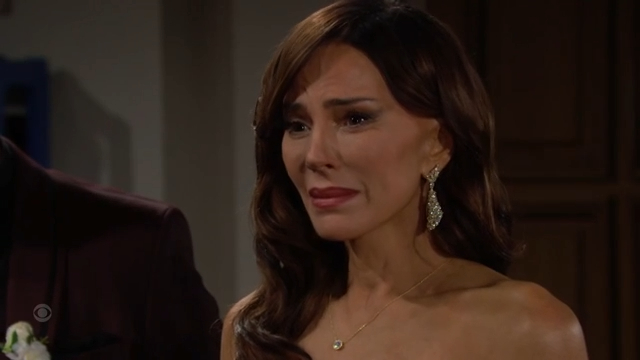 In the Wednesday, November 23, 2022, full episode recap of CBS’ Bold and the Beautiful, Stephen visits his daughters, Ridge and his guests worry about Douglas, and Thomas tries to stop Steffy.

We also have Tuesday’s B&B recap where Thomas caught Douglas playing the CPS tape and tried to stop Steffy from confessing to Taylor.

At the Forrester estate, Taylor says nothing will lose how amazing it is that she is about to marry Ridge in five minutes.

Thomas tells her to stick to that while he and his sister worry about their “little thing”.

Steffy insists their mom needs to know what he’s done. Taylor starts to freak out.

Thomas tells his sister to let this go but Steffy blurts out that Brooke didn’t call CPS.

Steffy knows her parents love each other but they should know the truth about the call.

She explains the app and plays the call for her as Thomas protests.

Taylor shakes her head. Her son claims it’s not exactly how it seems.

He admits he called CPS but it doesn’t matter. He got the job done and Brooke is out of their lives.

Steffy insists that Ridge needs to know the truth. Thomas says that’s up to their mom.

As the siblings bicker, Taylor paces and asks her son what is wrong with him.

He claims this is different from anything he’s done before.

This is about their family.

He’s sorry if he’s let her down, but Ridge loves her and wants to be with her.

The siblings both think they deserve to be happy together but Steffy thinks her father deserves to know the whole truth.

Both women are furious with Thomas.

Taylor is sure that Ridge isn’t with her because of what he did, but…

Thomas points out that if this comes out, his relationship with his father will be ruined.

He encourages her to go downstairs and move on with her life.

Steffy repeats she needs to tell Ridge the truth.

They can hear music and Taylor doesn’t know what to do.

She asks for a moment.

“Just do it,” Thomas encourages. His sister repeats she needs to talk to Ridge first.

Downstairs, Ridge and his guests worry about Douglas and wonder if he’s feeling overwhelmed.

Li tells him what a big day this is.

Ridge thanks Carter for agreeing to perform the wedding ceremony.

As they look out the window, Carter notices he seems a little off.

He wants him to be happy.

Eric says that Thomas and Steffy should be down by now.

They all assume emotions must be running high upstairs.

Thomas and Steffy jog down the steps.

Thomas claims they were just talking to their dad about how meaningful the day is.

Douglas and Steffy lock eyes and nod at each other.

She hands the kid his phone as everyone takes their seats.

The wedding march begins and Taylor comes in.

She looks at her children and catches her breath. Ridge looks confused.

When she gets to Ridge, he asks if she’s okay. Her eyes are welling up.

B&B opinion: How Bill could ruin the wedding

Katie and Donna are with Brooke at her place, telling her they will help her through the day.

As they discuss how great sisters are, their father Stephen, and Lucy show up.

They were just passing through and wanted to say hi.

Lucy tells Brook how stunning Hope’s preview was and how much Stephen has been boasting about the Logans and Forresters.

Stephen realizes something is going on.

They sit down and Brooke explains her suspicions of Thomas.

She’s glad her father is there to support her right now. They hug.

None of the Logan can understand what is going on. Brooke recaps all she knows. The sisters note how much Thomas disdains Brooke.

There has been a relentless campaign to put Taylor and Ridge back together.

“This guy has been bad news for this family,” Stephen realizes.

Brooke hates that things are so hard with Ridge’s son. Somehow he came between them and is now minutes away from marrying another woman.