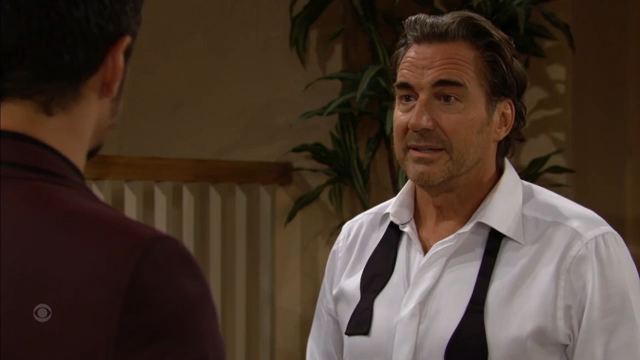 In the Friday, November 18, 2022, full episode recap of CBS’ Bold and the Beautiful, Bill tells Brooke to move on with him, Katie reminds Eric that Brooke is the love of Ridge’s life, and Steffy tells her mom she knew this day would come.

We also have Thursday’s B&B recap where Thomas and Ridge explained the CPS call to their family, Taylor believed Ridge was totally committed, and Katie urged Brooke to fight.

At Forrester Creations, Carter tells Ridge that he’s looking pretty dapper. Ridge realizes he should likely wear the cuff-links Taylor gave him years ago, but they are Brooke’s.

Carter offers to swing by and get them. He brings up his friend still loving Brooke.

Once Carter is gone, Ridge glares at a photo of Brooke on his desk.

At the Forrester estate, Taylor twirls around as she smells the flowers and looks at the champagne and crystal that have been prepared for the wedding.

She skips up the stairs and finds Steffy sneaking a glimpse of her wedding dress.

They giggle about the day of her wedding finally coming.

Steffy gets her to sit down so she can do her hair.

She notices her mom is distracted.

Taylor admits she’s thinking about Ridge not telling her everything that was happening with Brooke when he came to Aspen.

As they do her hair, Steffy admires her glow and they rehash what happened with CPS.

Taylor notes that her daughter has never given up faith that today would happen.

Steffy is sure that her father is marrying her because he loves her, not because of something Brooke did.

Taylor admits she’s been thinking a lot about Phoebe and Stephanie today and wishes they were there.

Steffy says they are and this is everything they ever wanted.

She’s finally getting her happily ever after and she couldn’t be happier.

Thomas drops by Douglas’ room and notes his son has not gotten ready.

He reminds his son that his grandparents are counting on him for today and so he is.

“Counting on me to keep quiet?” Douglas asks.

He thanks him for being there for him and keeping him together.

He and his sister have faith in him and his commitment to their mother.

Everything has been worth it to make sure they end up together again.

Thomas sure that his father is marrying Taylor because he loves her, not because of something Brooke did.

He wishes that he hadn’t told everyone about that call though.

“Brooke can never know,” he adds.

Ridge doesn’t want to discuss this.

Douglas comes down the stairs and his grandfather teases him about how good he looks.

Douglas says he wants to be happy for him and asks to go back to his room until the wedding starts.

Ridge realizes something is off. His son tells him to focus on Taylor.

Ridge tells his son how proud he is of him and the man he has become. This day wouldn’t have happened without him. They hug. Thomas looks worried.

B&B column: How Bill could ruin the wedding

Back at Forrester, Katie and Eric notice the office is almost empty.

She assumes he’s going to the wedding.

He’s sure this can’t be an easy day for her.

She is sure that he knows that her sister is the true love of Ridge’s life.

Eric admires Taylor but he agrees with Katie.

She wonders how he can support this marriage if he knows it’s not really the end for Ridge and Brooke.

Brooke paces in her living room looking at a wedding photo until Bill interrupts.

He knows about the wedding and notes Ridge didn’t waste any time.

She thought her marriage would last forever last time.

He just wants to support her and tells her nothing is going to stop Ridge from marrying Taylor.

He’s sure it’s hard for her to think about a life without Ridge, but he assures her that turning this page will present her with all sorts of opportunities.

Bill loves her and wants to show her true commitment, proving that he can make her happier than Ridge ever could.

She insists the vows she made today mean as much as they ever did.

He points out they clearly don’t mean so much to Ridge. Apparently, they were just words.

Carter arrives outside and eavesdrops as Bill tells Brooke that he will always love her.

He may have married her sister, but Brooke turns him on to life more and never tried to change him.

He asks her to give him the chance to have a future.

“You are the woman I want, not Katie,” he says.