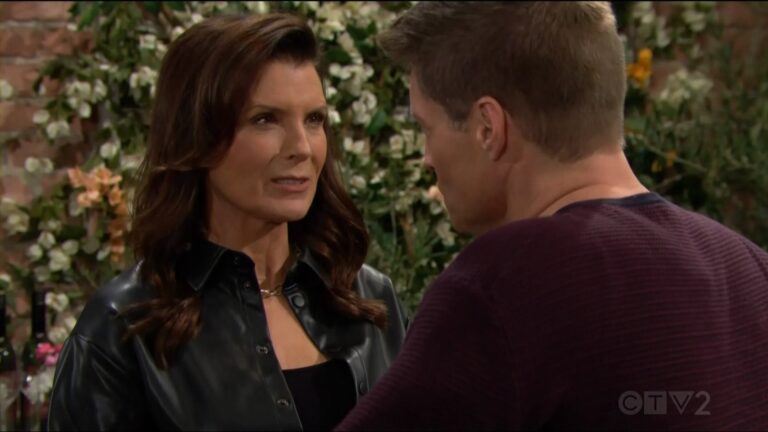 In the Tuesday, January 24, 2023, full episode recap of CBS’ Bold and the Beautiful, Hope and Steffy wait for the reviews, Zende feels like he’s in Thomas’ shadow, and Deacon tests pizzas.

We also have Monday’s B&B recap where Brooke screamed for Sheila to shut up as Sheila called Brooke and the others hypocrites, and Hope learns Deacon owns Il Giardino.

At Forrester Creations, Hope keeps checking her phone for news. Steffy says it shouldn’t be much longer.

They are eager to get the reviews for the latest collection. It wasn’t done by Thomas and a lot resides on how the press reacts to that.

Hope admits that Thomas is a hard act to follow. Steffy reminds her Eric is no slouch.

They start worrying about Sheila and the kids.

Steffy talks about how disappointed she is in her brother. He hasn’t even reached out to reconnect. Not that she’s thought about him much.

Hope admits she really misses Thomas’ designs. It was like he knew what she wanted before she did.

Down the hall, Zende and Eric talk about how happy they are with the work they’ve done.

Zende is starting to feel really confident for the first time, even if he feels like he’s still in Thomas’ shadow.

Eric knows Thomas is gifted, regardless of how despicable he is. But Zende is a good designer too.

Zende appreciates that but is worried about how their collection will be received.

They meet with Hope and Steffy. All of them are eager for the reviews.

One review comes in. Hope reads it aloud. It goes on about how amazing Thomas was before adding that Zende and Eric aren’t nearly as good.

Thomas brings Paris coffee at her place and thanks her for letting him stay when his family kicked him out. She might be able to think of a better way for him to repay her.

She reminds him that he gave her a place to stay once. Plus, she wants him to do all the cooking.

He knows he doesn’t always play by the rules but his heart is in the right place. He’s glad to have her in his corner.

She’s glad to have him in her life. They high-five.

She remembers she has a Hope for the Future meeting this morning. Everyone has to give Hope support since he got kicked out.

Once she gets dressed, she explains the reviews will be coming out any minute now. Thomas is sure they won’t match his because he is awesome.

He reads the review and is happy about how bad it is. He chortles that the company might call and beg him to come back.

At Il Giardino, Deacon is testing pizzas and scribbling notes when Sheila shows up.

She tries a slice and they discuss sun dried tomatoes.

He wonders why she’s there now that she’s footloose and fancy free. They congratulate each other on what they’ve accomplished.

She’s happy for him and he’s happy that she proved him wrong and got out of prison. “Daddy” won’t count her out ever again.

As they joke around, she starts thinking about the night in the alley. She says it was regrettable but she’s trying not to dwell on it.

She’d rather remember when he closed early and planned a special night out for he. They flashback to dancing in the restaurant. That meant the world to her.

He asks what’s going on with Bill. Deacon admires what an evil genius she is and how she played Mike like a cheap fiddle.

Again, he asks how she played Bill. She gets a bit uncomfortable.

After they recap all that happened, he asks how she really accomplished this.

She confirms that she and Bill are in a relationship and living together. Deacon thinks Bill is a jerk but he’s happy for her.