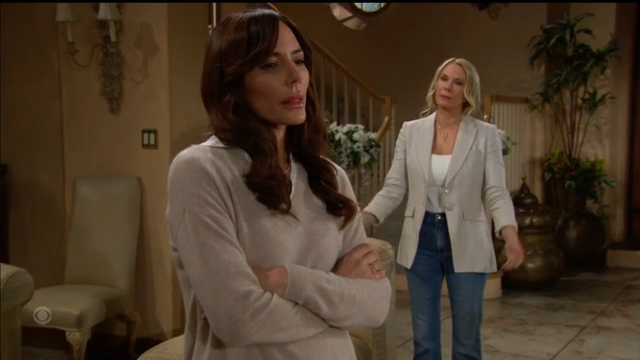 In the Friday, December 2, 2022, full episode recap of CBS’ Bold and the Beautiful, Liam and Hope tell Douglas how proud they are of him, Steffy lectures Thomas, and Brooke has unfinished business.

We also have Thursday’s B&B recap where Ridge told Brooke how Thomas framed her, she was outraged Taylor knew, and Thomas wanted to go see Brooke.

At Eric’s, Steffy huffs as she puts away the last of the wedding decor.

Taylor comes in and tells Thomas that what he did was hurtful and destructive.

He claims that was unintentional. He just wanted to remove Brooke from their lives.

His sister sneers at him for bungling things.

Taylor admits she played a role in this. She panicked and couldn’t tell Ridge the truth.

After she asks for a minute, her kids exit.

In the cabin, Hope and Liam wrap their head around what happened at the wedding.

Brooke tells them it was all so shocking.

Her daughter agrees that she was right about Thomas all along.

Brooke says the one good thing to come out of this is Douglas is coming home.

Hope can’t wait. She’s so proud of him for standing up to his father.

She wonders what’s next for her mom. Brooke encouraged Ridge to go off and think of what he wants.

She takes off to finish some unfinished business.

Hope tells Liam how foolish she feels for trying so hard to believe in Thomas. She should have listened to him or recognized the signs.
Liam starts twitching and stuttering when she explains Thomas tried to kiss her.

She shut him down and he backed off.

Hope didn’t want to make a bad situation worse, so she kept it quiet.

She’s sorry. He hugs her and makes sure she’s okay.

Eric brings Douglas in and they rush over to him.

Eric tells the kid how happy he was to have such a terrific young man around. Hope hugs her son.

Douglas thanks his great-grandad. Eric lists all his admiral qualities and tells him how well he will do in his life.

Once he exits, Hope and Liam tells the kid how different things have been without him.

They know he’s had a heck of a few days.

“It’s been hard,” Douglas admits, recapping how his father tried to keep him silent and he played the app recordings for Steffy.

They are proud of his bravery.

He explains that he couldn’t keep secret when Brooke was being blamed for something she didn’t do.

They commend him on his moral sense and then cuddle him.

Thomas and Steffy arrive in the office, and he tells her that she destroyed what they have been working for.

She tells him what he did was wrong and wishes she had her normal brother back.

Steffy thinks their parents would have gotten back together on their own. Her brother thinks that’s wishful hindsight.

She doesn’t know why he has to constantly re-learn about not crossing lines.

The damage he caused is enormous. He’ll have to pay the consequences.

Brooke shows up at Eric’s. “What a day!” she bellows to Taylor.

She explains she knows everything.

Taylor is upset with her son and worried about him.

Brooke says he needs serious professional help not from his enabling mother.

She feels sorry for her but is appalled she was going to go through with the wedding after learning what he did.

Taylor was going to tell him after the wedding.

She didn’t want to think it would matter to them getting married.

Brooke insists that Ridge never would have left her unless she did something unforgivable.

“I expected better from you Taylor,” Brooke complains, lecturing her about her moral failings.

The doctor tells her she only found out the truth five minutes before the ceremony. She knows this is a mess.

Steffy insisted she tell the truth and Thomas insisted she go ahead with the wedding. She thought they were both right.

She and Ridge were getting married because of them, not because of anything Brooke did.

Ridge chased her to the top of a mountain to swear he wanted to be with her and that had nothing to do with the other woman.

Brooke tells her that her past few weeks with Ridge were based on a lie.

She sent him off to do some soul-searching. She doesn’t want him back until he commits to her completely. None of them deserve the endless back and forth.

“For what it’s worth, I’m sorry,” Brooke says, wiping her nose.

Taylor is sorry too.

“Goodbye Brooke,” she says, walking out.