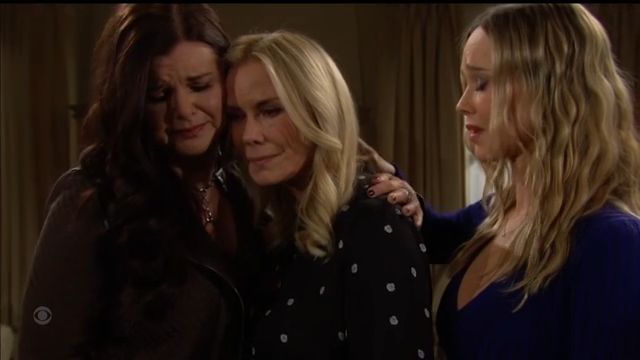 In the Tuesday, November 15, 2022, full episode recap of CBS’ Bold and the Beautiful, Donna and Eric are shocked to hear about the engagement and that the marriage will take place the next day, while Thomas gives his son another warning.

We also have Friday’s B&B recap where Ridge proposed to Taylor, and Thomas ordered Douglas to delete the app he used to make the CPS call.

Ridge and Taylor rush into the Forrester office to tell Stephanie they’re engaged.

Ridge smiles as Steffy takes in the ring and looks at the two embracing.

Donna and Eric both ask, “What about Brooke?” Ridge says nothing and stares.

Eric says obviously his son knows what he wants and congratulates them. Taylor calls it a shock to her, too.

She knows he’s a Bridge fan and this has to be hard for him.

At Eric’s, Thomas asks Douglas to come to work with him. “Whatever,” he says.

Thomas hopes he’s not going to sit around and sulk all day. He can’t stop thinking about what he did to Grandma Brooke. “That was wrong.”

At Brooke’s, Brooke tells her sister all about her talk with Thomas and that it always seems like he’s hiding something.

She doesn’t blame Brooke for her stance but thinks it’s made things worse for her and Ridge.

Brooke says there’s not much more that could make it worse since they signed annulment papers. He’s been so vague.

Brooke doesn’t think Ridge wants it to end. She doesn’t know how to give up on the love of her life.

Thomas and Douglas come strolling into Forrester. Steffy is beaming.

Taylor whips out her hand, making a whiplash sound as she grins at her son.

“Wow,” he says, happy they’re together.

Donna runs off to tell Brooke, Eric says, “To soften the blow.”

When Steffy again asks if Douglas is happy about the news, Thomas answers for him. Of course, he is.

Thomas takes his kid to sit down nearby and Steffy gets into wedding plans while Ridge goes to Eric.

He admits he’s not sure what to say. He wants his son’s happiness.

Only he can decide what makes him happy or who. He adores Taylor. It’s just that…Ridge knows.

They both thought she was his happily ever after. Steffy asks when the big day is.

She’s rocked to hear it’s tomorrow. They’re not getting any younger.

Taylor wants her daughter to stand up for her. Douglas watches the exchange looking sad. Ridge asks Thomas to be his best man.

Thomas is thrilled and agrees. He thought his dad was going to ask him to make a new suit, “Cause this one is bland.”

Thomas goes back to Douglas and tells him to watch how happy everyone is.

It’s a good thing and the right thing for their family and their future. He can’t say anything about that app.

Donna arrives at Brooke’s. Her sisters can see she’s not happy.

Donna admits that she came from Forrester.

Ridge and Taylor just announced their engagement. Brooke’s floored by the news.

He must have had intentions of marrying Taylor already.

She thought she had time to turn things around.

Her sisters think she does. Katie says it’s worth fighting for.

Brooke’s not sure how she can.

She doesn’t get why any of this is even happening.

Her sisters comfort her with hugs.