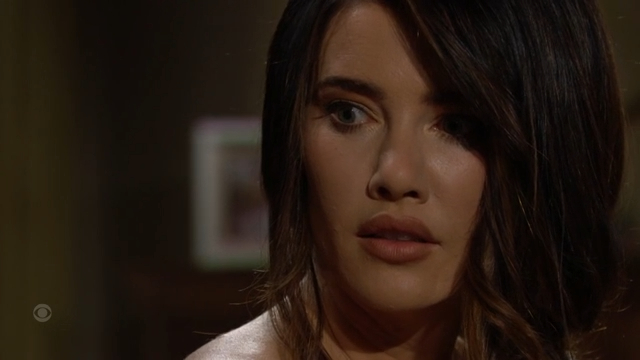 In the Monday, November 21, 2022, full episode recap of CBS’ Bold and the Beautiful, Taylor thanks Thomas for his support, Eric asks Ridge if he has any doubts, and Carter eavesdrops on Bill throwing himself at two Logans.

We also have Friday’s B&B recap where Thomas urged Ridge to never tell Brooke about the CPS call, and Carter eavesdropped on Bill asking Brooke to share his future.

At the Forrester estate, Steffy admires how beautiful her mom looks. Taylor has been waiting for this day for so long. Her daughter looks forward to her mom and Ridge finally being husband and wife again.

Downstairs, Ridge tells Thomas that without him and his sister, this day would not have happened.

Thomas assures him he would have made it to this point anyway but is happy if he played a part in it.

Thomas goes upstairs to see his mom and tells her his dad will be blown away when he sees her in her dress.

He knew this day would happen. She says it’s almost like he willed it.

“It’s crazy what some positive thinking will do,” he says.

She thanks him for refusing to give up. She never thought this day would come and throws her arms around him.

He’s glad it worked out when so much could have gone wrong. There’s nothing he wouldn’t do to make her dream come true.

Thomas assures her that Brooke will not be crashing this wedding. Not a horse, a moose, a cow or a goose.

Steffy assures Ridge that she has her mom on a schedule. They chat about Douglas staying in his room and not feeling great.

As Steffy goes off to check on him, Eric fusses over his son and suggests he listen to that voice in the back of his head.

He brings up the CPS call and asks if he’s sure he wants to go ahead with his wedding.

Ridge assures him that he is not rushing into anything. He’s glad his children are finally happy and he is proud of them.

His son insists that he is marrying Taylor today. He is surrounding himself with the people who make him the best man he can be.

In Douglas’ room, he thinks about his dad calling CPS on himself. Steffy shows up.

She urges him to talk to her if he’s upset about something. His aunt thinks he should be happy.

The kid brings up Grandma Brooke. Steffy says her dad realized he didn’t want to spend the rest of his life with her. Why is he bringing her up?

Douglas admits that his dad asked him to keep a secret and it’s stressing him out. She urges him to tell her what it is so he can feel better.

He plays the CPS call for her and explains how Thomas made himself sound like Brooke.

Steffy is speechless. “No, no way,” she says. With Douglas’ help, she realizes Thomas did this to split up Brooke and Ridge.

B&B opinion: How Bill could ruin the wedding

At Brooke’s, she remains confused. Bill asks if she wants to continue being part of this pathetic merry-go-round.

He thinks she should be with a man who really loves her and that’s him.

She reminds him he’s married to her sister. Carter eavesdrops on all this from the open doorway.

He claims he will always appreciate the family he had with Katie, but Brooke is the love of his life and the woman he wants.

She needs to accept Ridge is Taylor’s problem now and never let him come crawling back again.

Bill tells her Ridge is no longer an option, but she still feels he belongs with her. She wants Bill to understand and respect that they will never be together again, no matter how magical it may have been.

As soon as she walks off, Katie arrives. She guesses he’s already making his move on her sister.

“I am glad to see you my beautiful Katie,” he says. She looks perplexed and so does Carter.

He tells her that her sister’s “destiny” is marrying someone else right now. Bill wants them to talk about their own relationship.

This wedding has made him wonder why they aren’t working this out.

Brooke sits in her room along and fantasizes about Ridge.