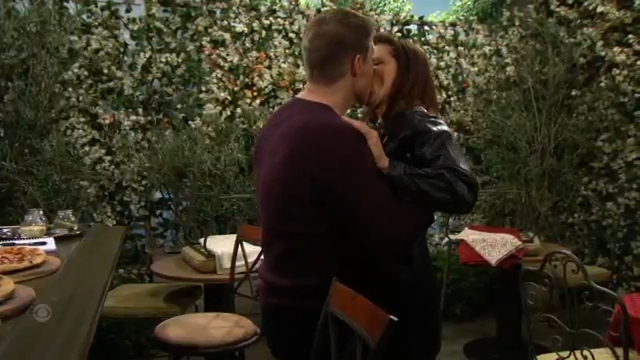 In the Wednesday, January 25, 2023, full episode recap of CBS’ Bold and the Beautiful, Sheila tells Deacon how she fell for Bill, Zende and Eric want to go back to the drawing board, and Thomas thanks Paris for her support.

We also have Tuesday’s B&B recap where Thomas was thrilled the Hope For Future reviews were bad, and Deacon asked Sheila how she played Bill.

At Il Giardino, Sheila eats pizza and tells Deacon he’s outdone himself. He thinks that’s nothing compared to her managing to stay out of prison.

He asks if she’s really in love with “megalomaniac” Bill or just using him.

She doesn’t see why it’s so hard to believe she’s in love with Bill. Deacon thought she was into him and now she’s suddenly with Bill.

She tells him not to take it personally and he keeps prodding for details about her spicy romance.

She explains that she followed Bill to the beach one night and they sat in the sand until sunrise talking. He really surprised her. They are more alike than she imagined.

They both just wanted to be loved.

Deacon notes how glowing she is and she confirms her feelings for Bill are real.

“I am going to spend the rest of my life with Bill Spencer,” she insists.

Deacon is sure she hopes that. She laughs uncomfortably.

He keeps trying to wrap his head around this. It’s hard. Deacon wonders if she was just using him for shelter.

Sheila cared about him and enjoyed every minute with him.

He asks how he “measures up” to Bill. She says he measures up fine but she’s not giving any details.

Deacon marvels at how this miracle happened. “I make them happen,” she says, laughing.

She tells him how organically she and Bill bonded. They recall their times in his little apartment. He reminds her no one can know about that.

He’s sure she will never forget how much sex they had in every nook and cranny.

What really impressed her was when he came to visit her in jail.

Deacon accepts that her feelings for Bill are legit, but are they really that tight?

He kisses her. She pushes him off and says that will never happen again.

Sheila wanted to tell him about her new relationship and congratulate him.

At Forrester Creations, Steffy assures Hope that the new line is spectacular, even if the top critic thinks it’s weak.

Eric prompts her to read it again. It praises Thomas’ artistry and innovation.

Zende feels responsible. Eric blames himself. Hope says no one is to blame. They just missed the mark and have limited time to make it right.

Panicking, Hope wonders if they need Thomas back. Everyone’s eyes bug out.

They remind her of what Thomas did to her and her mother. She says this is bigger than her.

They aren’t convinced when she suggests Thomas work remotely. Steffy wasn’t ready for this but will consider it.

They need to speak to Ridge before they make any decision.

At Paris’ place, Thomas reads the review to her and gloats. He starts checking his phone, expecting his sister or Hope to reach out and tell him how much they need him.

She’s never seen him so happy and confident. He thanks her for being so great to him and letting him stay with her.

Paris says she always tries to see the best in people. He recalls all he’s lost and how much he misses his son.

She can see he’s trying to be a better man. Plus, things seems to be looking up now that Forrester needs him.

Paris shows up in Hope’s office after missing the meeting. Hope tells her the review for the line was bad.

Paris guesses that’s because Zende and Eric aren’t Thomas. She though the collection was beautiful.

She asks Hope if she’s planning to ask Thomas to come back.

Steffy is not happy when Thomas sneaks into her office. She reminds him he’s not supposed to be there.

He’s read the review and is sorry she’s stuck doing damage control. She tells him his timing couldn’t be worse.

Smiling, he says it couldn’t be better. He sets out a bunch of his designs and says they are exactly what the line needs.

Thomas knows he screwed up but he can’t be banished forever.

He claims to have remorse and says he’s not asking for a full pardon. But at least she could let him be part of the business?

He keeps pleading for a chance and asks if he can still be a part of Forrester Creations.