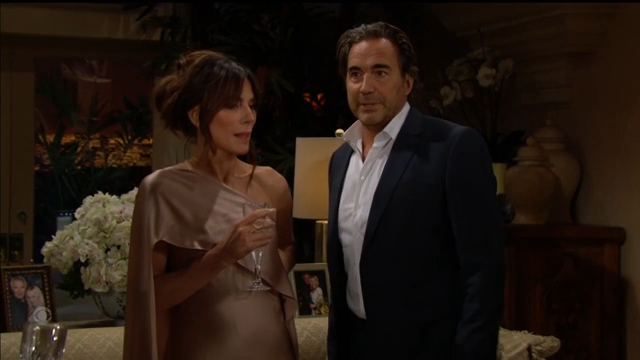 In the Wednesday, November 16, 2022, full episode recap of CBS’ Bold and the Beautiful, Katie and Carter don’t understand Ridge’s behavior, Thomas tells Douglas to forget what happened, and Donna refuses to attend the engagement party.

We also have Tuesday’s B&B recap where Ridge and Taylor’s engagement devastated Brooke, and Thomas warned Douglas to keep quiet about the app.

At Forrester Creations, Ridge, Carter, and Justin discuss a contract until Ridge’s engagement comes up.

Justin congratulates him and Carter reminds his friend he still loves Brooke.

After flashing back to “Brooke’s” call to CPS, Ridge tells them to drop this.

Carter asks if he’s sure about going through with this wedding.

Brooke shows up and says she was about to ask the same thing.

Once Carter and Justin file out, Brooke pokes Ridge for a confirmation of his wedding plans.

She assumes that is why he wanted the annulment.

He has to go to his rehearsal dinner. She demands he be honest.

Ridge reminds her they’ve done this already and it’s too late.

Brooke still loves him and demands to know if he is really marrying Taylor.

“I want you to have everything you ever desired in your life… and know that I will always love you,” he says, walking away.

Carter and Katie are in her office.

She’s livid about Ridge marrying Taylor and thinks her sister deserves an explanation that makes sense.

This doesn’t make sense to Carter either.

At Eric’s, Donna tells him that she can’t celebrate his son’s engagement while Brooke is in so much pain. She won’t be able to make it to the wedding either.

He understands. As she heads out the door, giggling Taylor, Steffy and Finn arrive.

Steffy isn’t surprised that a Logan couldn’t stick around for the celebration.

She thinks this is for the best and declares nothing will interfere with this wedding.

Taylor wonders where her son and grandson are.

Thomas visits Douglas’ room and prompts him to get ready for the party.

The kid doesn’t want to be around everyone because it means he will have to lie about the real reason Ridge and Taylor are back together.

Pulling up a chair, Thomas tells him getting upset won’t help anything and he needs to put it out of his mind.

It’s all a complicated adult situation.

Douglas repeats that Ridge has the wrong idea.

His father insists he doesn’t and Grandma Brooke has been trying to keep the family apart for years.

Nothing should stop the wedding between Taylor and Ridge because they are in love.

Once Douglas is in his suit, his father leads him downstairs, urging him to smile.

Eric tells Taylor the flowers are all from Stephanie’s garden and reminds her of how much she loved her.

They notice Ridge isn’t there.

Thomas talks about finally getting something he’s wanted his entire life.

There is no stronger love than between his parents. It’s true love and it needs to be protected.

Ridge says that Taylor is precious. Thomas says she will never let him down.

They drink to this.

Steffy can’t beat this toast. Eric wants to hear from the groom.

He doesn’t know how all this happened.

Thomas and his son exchange looks.

With some prodding, Ridge finally blurts out that he knows who called CPS on Thomas: it was Brooke.

Everyone is shocked. Eric can hardly believe it.

Ridge says he heard her voice and there is no doubt.

Douglas and Thomas stare at each other.

Back at Forrester, Donna and Katie corner their sister and offer their sympathies.

They all shake their heads and talk about how none of this makes sense.