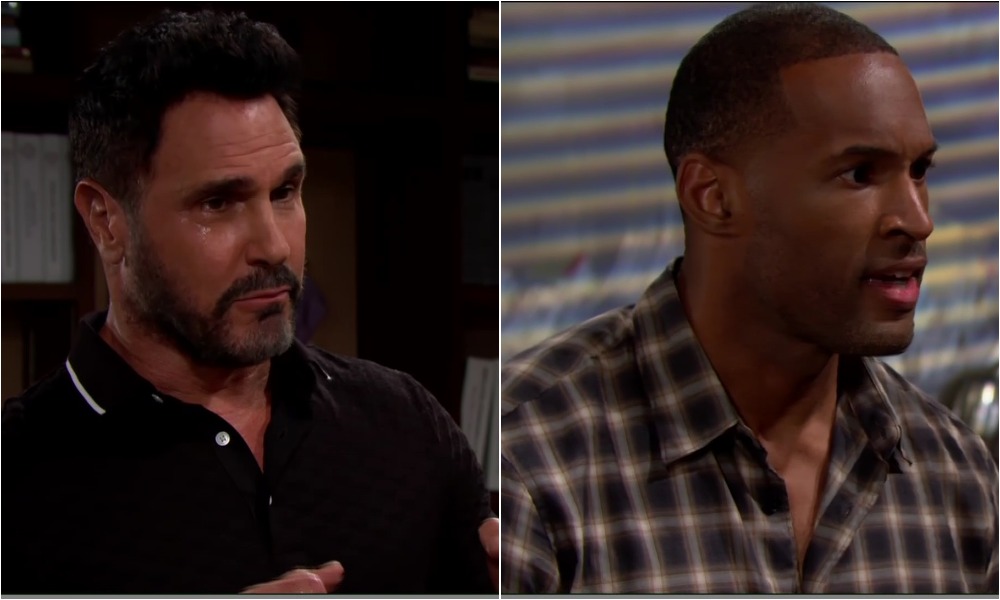 In the Friday, October 15, 2021, full episode recap of Bold and the Beautiful, Katie and Bill discuss their relationship, Ridge goes at Eric again and Quinn is told to dump Carter. In case you missed it, Soaps Spoilers has Thursday’s B&B recap where Ridge blamed Carter for his issues with Eric.

After Quinn tells Eric she doesn’t understand his need to push her into Carter’s arms, Eric says maybe they can rectify this. “Can you make it clear to Carter that this is over for good?” He asks her to go to him now. Later, she’s gone when Ridge walks in. He’s still trying to wrap his head around his father’s marriage. He doesn’t get how Eric encouraged his wife to be with Carter. Eric says it seemed like the best thing at the time. He agrees with his son that no affair would have been best. Ridge thinks this must have been painful for him and blames Carter and Quinn. Eric sneers and tells him to stop blaming them. He says he knows that this is wrong and tells his son Quinn is telling Carter it’s over.

In her office, Katie looks at a photo of Quinn and Eric. She turns around and Bill’s there. “It’s been way too long.” He wants her back and needs her in his life. There’s a hole in his heart, he tells her and he misses their son. Katie thinks that boarding school is good for him. She still has a hard time with what Dollar Bill did. “It frightened me.” He left a man on the side of the road, destroyed evidence, covered up the scene. Bill admits he was laser focused on protecting Liam. She says this is familiar. He does this all the time and it blows up in his face and then he comes to her, knowing she loves him and will be there for him. At that moment, she’s the one he loves more than another. She always wanted to believe that. She cries as he says it’s true. She’s the woman he wants to be with. She’s not sure. He loved Brooke. Katie forgave her but the thought of them together always hurt her. Bill deeply regrets that he tells her, his voice filled with emotion. She wonders why she allows herself to be in situations such as this that are demeaning. She thinks she deserves better. He agrees. She’s the one he wants. Katie has spent time thinking about what she wants. He cries and asks her to open the door for him, just a crack. He learned his lesson. He swears not to let her down.

In his apartment, Thomas hopes Paris won’t regret sharing his place with him. They shake on it. She calls it a temporary arrangement until he finds a new house. Zende wanders in with a new coffee maker as a housewarming gift. He kisses Paris and she tells him Thomas isn’t going to move out. “Say what?” He asks. “We’re gonna be living here together.” He stares at Thomas. “You and Thomas?” She asks if he has a problem with this. He turns to Thomas. “You and my girlfriend?” She wants him to be comfortable with this. “Are you?” He thinks on that.

Quinn arrives at Carter’s place. “You and I have unfinished business,” she says. He grins as he lets her in. She used to think of his loft as their sanctuary until Justin barged in. Carter admits that her presence is there always. He wants more than that. “Stop,” she tells him. She talks about being vulnerable to him and how he made her feel like the most beautiful and desirable woman in the world. “You are,” he says. She cherishes the moments they’ve spent together. He was surprised to find love again too. He wants to finally be together. She tells him she’s married. He wants her to give it all up for him and knows it means a lot to her but what they have is rare. He asks her to tell him she wants a life with him.