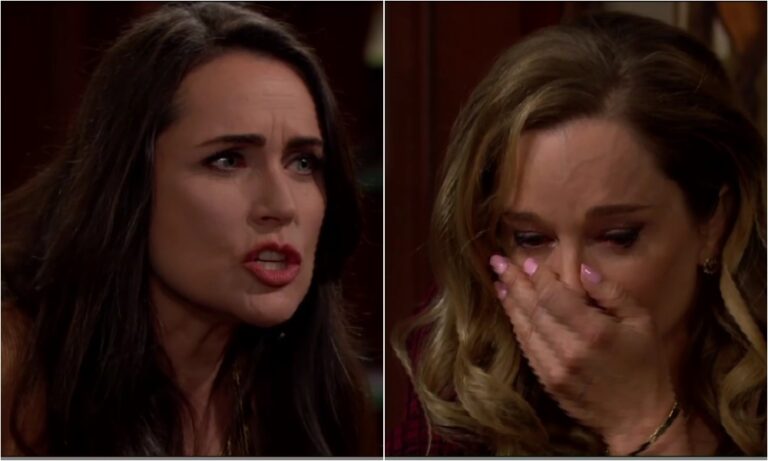 In the Monday, November 1, 2021, full episode recap of Bold and the Beautiful,  Katie and Carter hold hands, Quinn warns Donna some more, and Brooke worries Quinn will go after Donna. Soaps Spoilers has Friday’s B&B recap where Quinn went ballistic on Donna for thinking she “stole her man.”

Keep your hands off my husband,” Quinn spits. Donna doesn’t know what she’s talking about. Quinn thinks she’s going after her husband and warns her not to or she’ll make sure she never sees Eric again. Donna cries. She wants to get back to her desk. Quinn doesn’t think she understands that Eric’s her husband and she won’t tolerate Donna disrespecting her marriage. She won’t sit quietly while she makes moves on her husband. “What I’ll do is make you pay.” Donna cries that they only shared a hug. “Must have been some hug,” Quinn snaps. She stops pinning Donna against the desk and Donna moves behind it as Quinn rants that she looks down her hypocritical nose at her like her sisters. Quinn knows she’s made mistakes and has apologized for them. “It doesn’t justify you going after my husband.” Donna tries to explain she isn’t. “I am not letting you steal my husband. I am going to do everything I have to do to protect my marriage and if that means that I have to eliminate you from our lives forever, so be it.” She takes off.

At the mansion, Eric tells Brooke that Quinn deserves to know the truth about him having a breakthrough with another woman. Brooke gets it but knows Quinn’s notorious about getting out of hand when she’s upset. Eric doesn’t think she’ll do that with him. “She may go after my sister,” Brooke worries. “She doesn’t have a deceptive bone in her body.” Eric agrees. When Quinn feels slighted, it gets stuck in her head. “She can be dangerous. I’m just worried about my sister.” Eric knows. He kisses and hugs her and assures her that Donna will be okay. “Go on,” he says. Brooke goes. Quinn returns home. She asks Eric when he was going to tell her about him and Donna. She overheard him and Brooke talking. She complains that he couldn’t get an erection with her but he could with Donna. She says, “Donna Logan?” As if it’s a surprise. She realizes his erectile disorder is about her. She asks what happened with Donna so she can understand. He tells her it’s innocent but she finds that hard to believe. “I see that,” he says but it was. He reveals it was them talking about friendship and history and that it happened twice. Quinn knows when it happened. The night he wanted to make love to her. “That was about Donna.” Eric says he wanted to have sex with her. She tells him she doesn’t want Donna around him ever again. He needs to fire her and get Donna out of their lives forever, if he wants to be a part of their marriage.

At Il Giardino, Katie comments that Carter’s still holding her hand. He asks if it’s okay. She has no problem with it. Katie talks about Quinn and thinks Carter deserves better. Somebody who always puts him first. Carter says Quinn went back to Eric. Katie asks if he would go back to her if he had a chance. He doesn’t answer. He’s glad to sit down with her and chat. They’ve known each other a long time but have never just sat down to talk. “You said earlier that I needed someone who appreciates me.” He tells her the same thing goes for her. Bill never appreciated her. He calls her smart and accomplished and vulnerable, and funny. He says, “You’re vulnerable,” again. He calls her honest. “Thank you,” she says, blushing. She’s a wonderful mother to Will. “Good friend and sister. I don’t know where this strength comes from.” He knows she feels shadowed by her sister but, “I see you,” he tells her. She tells him the feeling is mutual. How is he not attached? He wants someone to build a future with. “And you thought that woman was Quinn?” He shoots her a look. She apologizes. They smile and tell each other they see good things ahead.

Back at Forrester, Donna tells Brook that Quinn knows what happened between her and Eric. She was there…Donna tells Brooke that she pinned her against the desk with a chair and went off on her. Brooke’s surprised. How did she find out? Donna admits she overheard Brooke talking to him.