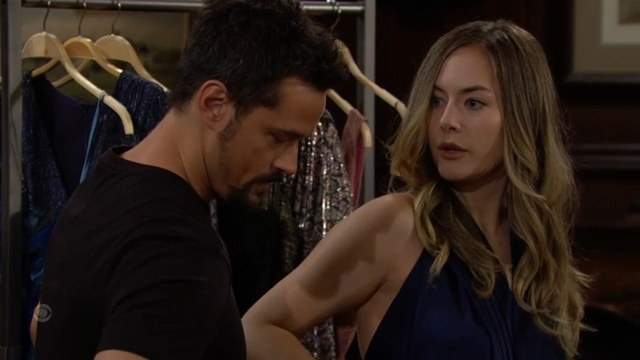 Lift your disbelief up high!

When you watch The Bold and The Beautiful, you must accept that a large part of it (sometimes most of it) will require that you suspend your disbelief in such a way that you might need a crane to lift it high enough.

This week, we had to believe that no one can see how creepy Thomas is, that victims Hope and Douglas were now firmly on his side for no particular reason and that Taylor was able to buy back the completely unaltered beach house she owned year ago.

I did a lot of heavy lifting of my disbelief this week. How about you?

Thomas, on the edge of sanity

The Forrester heir apparent continued to fantasize about his little sister… I mean ex-wife… I mean abuse victim Hope this week and it was all kinds of creepy.

Flashbacks to the CPS call and inner monologues about controlling his feelings don’t make me think that Thomas is sane. The surprise cameo by Hope’s uncanny mannequin confirmed it for me – Thomas is losing it AGAIN!

No one sees who Thomas really is

Almost everyone in Thomas’s orbit has been down this road before. So why doesn’t his mother the psychiatrist (or anyone else besides Brooke) suspect that all may not be right with him?

The answer is simple: it’s the only way to tell this story this way. If anyone were to logically wonder if Thomas was not right in the head, there would be no story.

In other words, this is just more manufactured drama that requires you to believe in nonsense.

I’m not against Thomas finding happiness because redemption can be good story and women fixing broken men has always been woven into the fabric of B&B.

But happiness shouldn’t be found with the all too forgiving Hope or at the expense of her seemingly solid marriage.

Douglas is still having “so much fun”

Thomas’s other victim… I mean son, Douglas surprised everyone this week when he told Liam that he didn’t want to go home!

It got worse when Douglas said he wanted Hope to be with Thomas.

Why has Thomas’s son, who once cowered in fear of his father, become his biggest booster? You know the answer: because it’s the only way to make this convoluted story work!

I could imagine that Douglas is now Team Thope because the kid has the weight of the world on his little shoulders and may think it’s his job to make everyone happy.

A lot of abused kids feel that way, as though they are at fault for adult problems, especially after Thomas told him just that. A smart kid like Douglas could think that it’s his job to fix everything.

I’m probably giving the story way more depth than would happen on B&B. What do you think?

So everyone at the network is cool with the strange tale of Thomas and Hope? No notes? Well, I have some thoughts.

Thomas’s “your body, your curves” imaginary dialogue would still have been creepy even without his abusive history. His troubled history made this scene not romantic but disturbing and unsettling.

We know this scene was Thomas’s fantasy, but watching an abuser erotically caress the woman whose life he made hell was gross for me and undoubtedly triggering for women who’ve been victimized by men like Thomas.

This story is such a bad look for the show!

Brooke wasn’t single for 24 hours before men were lined up to be her next stud like she was the prize sow on a farm.

After Bill’s unsuccessful attempt to lasso Brooke, it was Deacon’s turn – and it was as embarrassing as you could imagine for the convict.

I’ll lift my disbelief up again and give Deacon credit for at least coming prepared. He had a lot of greeting card dialogue memorized for the proposal and presented a nice ring, wherever that came from.

I could almost believe that Deacon was sincere if it weren’t for the nine-toed other convict waiting for him back at home!

Brooke could have said something like “Deacon, you and I are never going to happen again. I wouldn’t do that to Bridget and I don’t love you. Get on with your life. I’ll see you at Thanksgiving,” and then show him the door.

Then Bill and Deacon run into each other at Il Giardino, call a truce, commiserate about Brooke over drinks and share their theories as to what made Bridge come tumbling down AGAIN.

Bill has a proposal for Deacon – if he finds out why Ridge left Brooke, there might be a position for him at Spencer Publications.

Can you guess what I think it is?

It’s common knowledge that B&B doesn’t know how to write for happy couples like Eric and Donna or Carter and Quinn. Now the same is happening with Ridge and Taylor.

Taylor was about to kick rocks just a few show days ago and now she’s effortlessly jumped into happily ever after and once-a-week filler scenes.

Where’s the drama in that? The road to love on a soap opera should be scattered with speed bumps and obstacles. That’s what makes us care about a couple.

Ridge and Taylor having a smooth ride is pretty much the opposite of soap opera!

Give us organic drama for Tridge!

While the revived beach house is cute – here comes the disbelief again – and looks much the same as when Taylor lived there years ago. BORING!

An empty nest in need of feathering would get Ridge and Taylor bickering over decorating and closet space, and normal couple stuff and realizing how much they’ve forgotten about each other.

Not every conflict needs life-and-death stakes to be entertaining!

Tridge getting a fully furnished house is storytelling cheat that avoids organic drama and favors the manufactured nonsense of Ridge not saying why he left Brooke.

What if Brooke shocked Ridge by signing no-contest divorce papers? He breathes a sigh of relief, but the drama is just beginning!

The next issue of Eye on Fashion drops with an exclusive interview with Brooke, telling her story of being cheated on by her husband the “has-been designer” and his “quack floozy side piece!”

Brooke is going scorched earth on her rivals and launches another fight for the control of Forrester Creations!

Next time, send me a fruit basket!

Brooke, to Liam: “Credit where it’s due. Steffy, Thomas and Taylor. Look what they managed to do in record time.”

What do you think? Will Thomas and Hope give it another go? Will Brooke ever figure out why Ridge left?