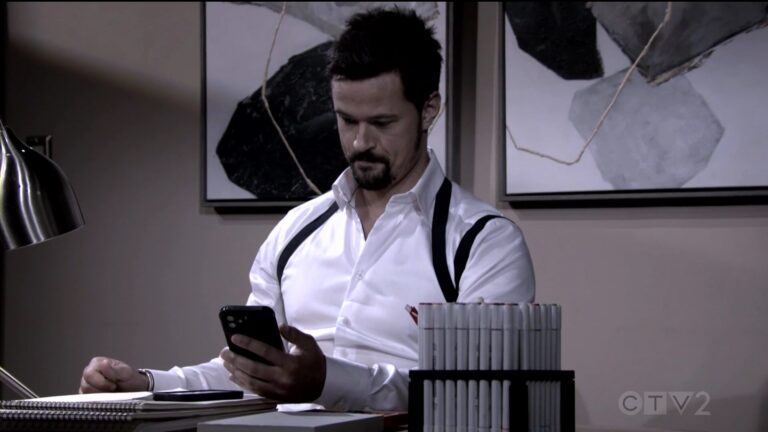 Say what you will about current story quality, but things happened this week on The Bold & the Beautiful, and that’s a good, albeit rare thing.

Let’s jump right into the action!

Lose some, win some

Whew! It’s a tough time to be a supporter of the Forrester family. Am I right?

Predictably, it turned out Thomas did use that voice-change app on Douglas’s phone to make it sound as though Brooke made the call to Child Protective Services, thus bringing about the demise of the Bridge marriage.

Who could have seen this twist coming? Well, anyone familiar with B&B’s heavy-handed plotting, that’s who!

Were you at all surprised?

Judging by the unusual silence in my Twitter mentions, I think the online Forrester fan community is having a hard time dealing with Thomas still being a bad guy.

I’m truly sorry for your disappointment!

I know how much you wanted to believe that Thomas had put his devious ways behind him to be a good father to his son.

I wanted a surprise twist in this creaky story as much as anyone, but was that ever really a possibility?

At least until the next rewrite!

Reunited and it feels so… meh

Every cloud has a silver lining. Thomas’s phony phone call brought about the reunion of his parents that Tridge fans have spent months waiting for.

Too bad it took place just a few hours after Ridge walked out on Brooke without a word of explanation!

Ridge and Taylor being more or less tricked into getting back together – and back in bed – isn’t my idea of soap opera romance.

The bright side of the Tridge reunion might be an end to hard-sell Steffy. I can’t take any more of her!

She’s never one for winning graciously, so you know that Steffy could not pass up the opportunity to confront an already broken Brooke and rub her stepmother’s nose in this stinky mess of a story.

In yet another upcycled version of an old Stephanie and Brooke scene, Steffy smugly declared “It’s my mother’s turn now!” while Brooke just sobbed.

That line was probably not supposed to make me laugh, was it? But the idea that Taylor has earned her turn on the Ridge merry-go-round is both funny and tragic.

Memo to the writers

There should be more drama and uncertainty to the latest reunion of a philanderer and an alcoholic.

It’s taken forever to happen, but Ridge and Taylor have actually had a pretty easy go of it this time.

Too easy, if you ask me. What story will there be now that Tridge are back together? I’m open to suggestions!

Set limitations will probably require Tridge to be the latest houseguests at Fort Forrester, which could lead to some great drama.

I want Donna to be nipping at Taylor’s heels and Eric to be the one to figure out what Thomas did.

Give us family drama and loyalties strained!

Down and out… for now

The heartless way that Ridge dumped Brooke and Steffy gave her the final kick to the curb will make it hard for me to care about the latest incarnation of Tridge, let alone root for them as a couple.

Brooke has been begging for answers from Ridge for months, while he just stands there, refusing to give any truthful explanation as to why he’s checked out of their marriage.

The way that Ridge has treated Brooke has veered straight into psychological abuse, so nothing new there.

It’s his tried-and-true method for dealing with inconvenient women, as Taylor will undoubtedly be reminded of in the near future.

The only character who should be treating a woman like she’s worthless is a villain.

Certainly seems that way to me. How about you?

We need a scene where the Logan coven (that’s a compliment) convenes to comfort Brooke – and trash Ridge, Taylor, Steffy and Thomas – because that’s what sisters and daughters would do when one of their own is in crisis.

Give us some light comedy with the Logan ladies drinking expensive wine and saying things out loud they normally wouldn’t.

But give it to us with heart!

Has everyone had enough of sobbing, confused Brooke? Me, too!

So let’s get fire-in-her-eyes-and-revenge-on-her-mind Brooke back, with a plan to make Thomas and Steffy pay!

After the dust settles and she files for divorce, Brooke should trade her dusty Norma Desmond mansion for a fabulous new penthouse with a hunky on-staff masseuse.

It would be the perfect place to plot her revenge against the Forresters!

Because we want what? DRAMA!

Memo to the writers:

Brooke and Ridge no longer have any rooting value as a couple. Turn their shredded relationship into a professional rivalry and let this lifeless love triangle stay dead.

Also, please resist the temptation to write that a woman’s romantic past somehow invalidates her right to be treated like a human being.

If you can’t, then perhaps soap operas are not the genre for you to work in.

Taylor, spying on Ridge and Brooke: “I’m pretty sure I see Brooke mouthing ‘destiny’ over and over again.”

What do you think? Are Tridge endgame? Can Steffy put her pimping days behind her? Will Sheila ever do anything interesting again?