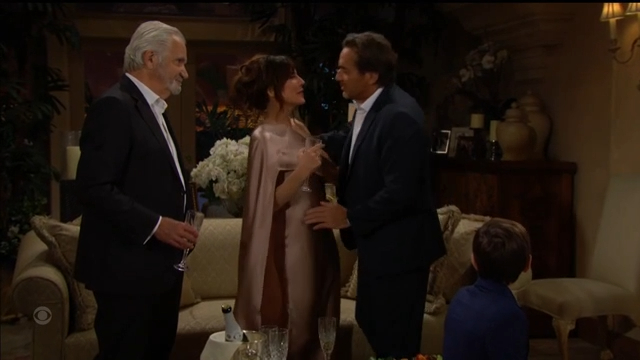 Bold and Beautiful opinion for November 14-18.

Ridge and Taylor sprint to the altar.

It was only last week on The Bold & the Beautiful that Ridge proposed to Taylor mere moments after ending his latest marriage to Brooke. Not too long after, Ridge and Taylor, his second most frequent wife, were putting together a dream wedding for the very next day.

What’s the rush? Where’s the wooing and the romance?

If a soap couple can’t overcome a few problems on the road to happiness if their relationship is so fragile that knowing the truth about why the last relationship ended would destroy them, then what exactly are we rooting for?

Ridge and Taylor are doomed and we all know it

I’m no world-renowned psychiatrist, but Ridge not telling Taylor why he left Brooke doesn’t seem like solid footing for them to start yet another marriage on.

It doesn’t even seem like natural human behavior, does it?

What is The Dressmaker’s motivation for basically lying to both of his “great loves?” Why is Taylor not questioning anything? Why is Steffy so blinded by her childish need for her parents to be together?

It’s the same answer for all three questions: because it was the only way to write these characters into this story.

The story might have worked with different characters, but it’s completely implausible that Brooke, Ridge and Taylor are doing this.

I guess Ridge is still supposed to be the romantic hero of this show, right?

I ask again because when Ridge revealed to his family that “Brooke” calling CPS was the moment he decided to trade wives again, I was not getting romantic hero vibes.

Ridge Forrester is not a romantic hero. At best, he’s a patsy who’s been led around by his peen – pulled by his own son.

Taylor, can we have a word?

Hey! Over here. Can we talk?

Taylor, there’s a big red flag waving right in front of your face! Don’t you see it?

No? Okay, let me break it down for you, Doc. You’d better sit down for this.

First off, are you sure Ridge really proposed to you? The way we saw it, he was just squatting and holding out a ring.

Did he even say anything before you said yes and jumped on him? Nope!

So, the alleged love of your life couldn’t be bothered to speak the words of a marriage proposal to you. I’m not sure he’s even spoken a page of dialogue to you this month.

Are you seeing the red flags now, Dr. Hayes?

Does any of this seem right to you, Taylor?

Is this not supposed to be the big your big moment, in which the man of your dreams whisks you off your feet to live happily ever after?

That’s not what I’m seeing when I look at Ridge.

What I see is a serial monogamist with serious mommy issues who hops from one woman to the next to try and fill a void in his life.

Here’s the catch –that no one person will ever fill the emptiness in his soul.

Come on, Taylor. You know it’s true and that no amount of “making memories” and being “a real family” is going to change that.

Doc, everyone knows you’ve been off your game lately, and I want to help.

So here’s a completely unprofessional and slightly biased theory for you to consider.

Ridge doesn’t love either you or Brooke because he’s incapable of love!

He looks for women like you to prop up his massive ego and walks out on them for the first infraction he can justify.

Why? Because he’s so emotionally damaged from watching his parents’ dysfunctional relationship that he doesn’t even know what real love is.

Sorry if I ruined your big day, but you’ll thank me later!

But seriously, folks. Taylor believing that Ridge is with her because he loves her and not because of the CPS call is one of many reasons her office should be shut down.

Shouldn’t a world-renowned psychiatrist be a little more aware of what’s going on with the people around her? I’m fine with Taylor being a love fool, but she doesn’t have to be a complete fool.

What is the point of Taylor being an expert on the human mind her expertise is never going to inform story?

Getting it wrong with Sheila and now Thomas just makes her look like a quack.

Tridge fans should hope that the wedding doesn’t happen because you know what happens to happy couples on this show – into storage until the next cheese and crackers party!

If this plot doesn’t culminate in the Forresters turning their backs on Thomas, Ridge in the doghouse, and Steffy realizing she’s been made a fool of by her own brother, then B&B isn’t really a soap opera.

I’d love to see a dramatic arc in which a down-and-out Taylor questions everything – her qualifications as a psychiatrist, her own mental health, her sobriety, and her place in this messed-up family.

How Bill and Brooke should be

I like that Bill wants to help Brooke, but he’s going about it completely wrong.

Bill should have been at Brooke’s door the day of the wedding in a tuxedo with an amazing dress for her – and a plan to crash Ridge and Taylor’s wedding and ruin their big day.

Bill and Brooke could arrive just in time for Carter to pronounce Ridge and Taylor as man and wife. People are buzzing about them.

Bill grabs a glass of champagne and makes a toast to the happy couple, who are quietly freaking out over these unwanted guests. In fact, Bill has a wedding gift for the bride.

He tells everyone that he made a few phone calls and got to the judge who would approve the annulment.

Bill told the judge all about Ridge and Taylor’s history and the judge was concerned.

“So concerned that he denied the annulment request!” Bill reveals, pulling Ridge’s annulment papers out of and showing the big red DENIED stamped across the first page to all the guests.

Ridge and Taylor’s wedding is invalid because Ridge and Brooke are still legally married!

Chaos ensues and Bill takes a moment to wink at Taylor and says “You didn’t think I forgot that you shot me, did you?”

That boy is the smartest member of the Forrester family, if not the whole show!

What do you think? Will Ridge and Taylor get married again?

Will Brooke marry Bill just to shut him up?